Last night I had planned on barbecuing. It’s not really BBQ* season yet, but the snow has melted from around our barbecues (although without any grass growing yet, the ground around/under them is a morass of clay mud). The grills not being buried or frozen closed is pretty much all a Canadian needs to get started cooking in the back yard. 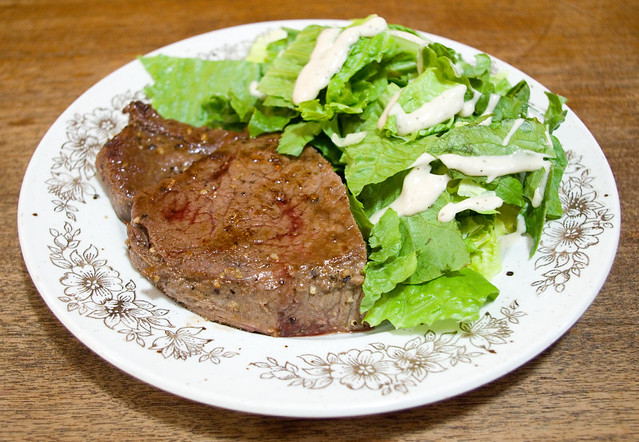 That being said, the temperature plummeted last night. Heck, it snowed off and on since Tuesday night, but it had hovered around freezing for most of that time. But once yesterday afternoon came around, the wind picked up and it started getting cold fast. By midnight it was -7° (-16° with the wind chill), and by morning it was -11°C and felt like -20°C. As winter temperatures around here go, that’s not too bad, but that’s really cold for April. Not only that, but the wind reached 90Km/hr gusts — you know it’s windy when you’re driving and debris is passing your car. With that wind, the cold just cut right through you… So yeah, I didn’t want to stand outside and cook. Not only that, but winds like that make it very difficult to get an even temperature on the grill!

So dinner wasn’t barbecued steak, it was pan-fried. It was very tasty pan-fried steak, though, cooked medium and tender. I served it up with a heaping side salad, which kind of felt summery if you didn’t look out the window…

* Yes, I am fully aware that what we call “barbecue” around here is what people in the southern USA would call “grilling”. We don’t really have a low-and-slow BBQ tradition around here, although those few times I have had it, it has been mouthwateringly delicious.

One thought on “It Was Supposed to Be a Barbecue”