Keeping on the theme of making easy dinners in the crock pot, friends of mine recommended the Slow Cooker Lemon Garlic Chicken recipe from AllRecipes.com. They said that they loved it, but I was less than satisfied. I followed the recipe exactly, but the chicken turned out dry and not very flavourful. There wasn’t even much sauce to pour over the meat to relieve the dryness. 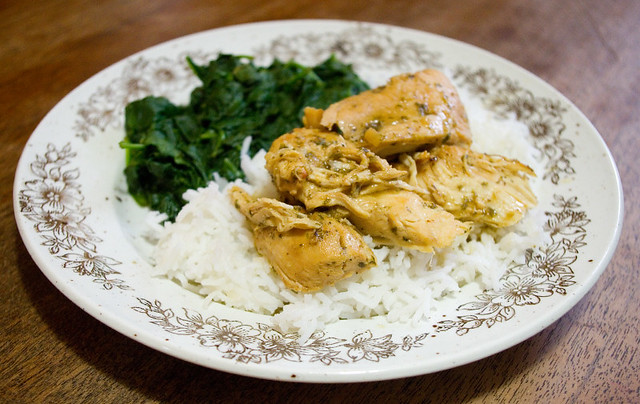 I went back over the website to try and figure out where I went wrong. Well, it turns out that it’s totally possible that my friends made a completely different dish than I did! (And if so, no wonder they were raving about it, because the other version looks lovely.) If you watch the video of how to prepare the dish (which I did not), it adds a lot more ingredients that aren’t even mentioned as options in the recipe text. First of all, for spices, it adds onion powder, garlic powder, and paprika. Secondly, baby carrots, sliced mushrooms, and frozen peas are added to the crock pot before setting it up to cook. Thirdly, the 1/4 cup water and chicken bouillon is replaced with 1/2 of a cup of white wine and 2 cups of chicken broth. With all of those added flavourings and liquids, of course the dish wouldn’t end up dry and tasteless.

Personally, I think that if you’re going to make a recipe video, you should stick to the recipe that goes along with it. The easy fix to this would be to add the changes to the text of the recipe. When reading a recipe, one shouldn’t have to filter through the comment section or watch a “how to” video in order to get the correct list of ingredients — neither of which are an option in a hard-copy cookbook anyway.

Sadly, I think AllRecipes dropped the ball on this one.