I’m happy to report that there are finally fruits and veggies in my garden that are ready to harvest! It’s been a very dry summer for the most part, and although I’ve been watering my garden religiously, I think it’s having an effect on the garden. However, over the last week or so we have had a storm almost every day, alternating with sunshine, and my plants have loved it. 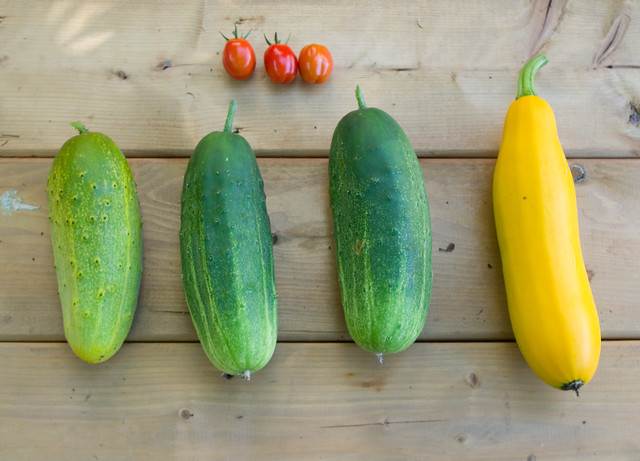 My tiny cucumbers and zucchini have swelled up remarkably in the last week and a half! The largest of the cucumbers is about 7″ long (18cm) and is so thick that I can’t wrap my fingers entirely around it. The three cherry tomatoes (and now I’m sure that the self-seeded tomatoes were the little ones since they’re ripening at such a small size) were sweet and delicious straight off of the plant. I know the zucchini would have grown larger, but they’re more tender at a smaller size. Some of the absolutely enormous zucchini gifted by friends last year had a really tough skin that had to be peeled before it could be eaten. I mean, don’t get me wrong, I still ate every last squash, but the bigger they are, the harder the skin. (Also, the really big ones you have to scoop out in the middle like you would a pumpkin, because the seeds are quite tough too.) Also, I’ll admit that I wanted to get to the zucchini before the animals or bugs did. I know that it’s supposed to be one of the easiest things in the world to grow, but between insects and squirrels/chipmunks and just plain bad luck, I’ve only ever managed to grow a single zucchini before, and it was a tiny one barely worth harvesting. 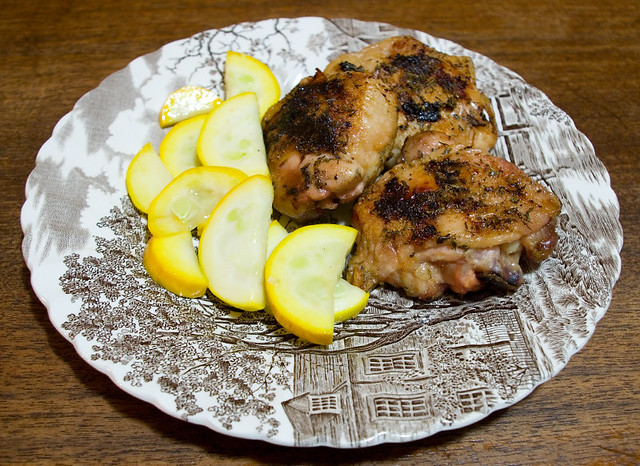 I would be writing about the size of this first zucchini right now except for the fact that we ate it almost as soon as it was off of the vine. My husband fired up the barbecue yesterday and we had chicken thighs with the skin on, topped with a sprinkle of herbs (my usual sage, thyme, garlic powder, summer savoury, and sea salt; there would have been rosemary too, but I had run out). As a side dish, I sliced the yellow zucchini and threw it in our non-stick grilling bowl with a sprinkle of salt and a drizzle of olive oil. As it couldn’t possibly have been fresher, it was oh-so-tender and light-tasting. I didn’t even have to fight with the kids to get them to eat their vegetables, which is quite the feat at dinner time around here these days.