A friend came by this past weekend to hang out and chat, and also to gift me with some of the excessive produce from his family’s garden. Apparently zucchini has really liked this year’s rainy summer, and tomatoes weren’t far behind in the production department.

Zucchinis and tomatoes in cardboard boxes from my friend’s garden; tomatoes and cherry tomatoes from my garden in the green bowls.

I didn’t try to grow zucchinis this year, but my tomatoes are ripening up nicely as well, so I ended up with much more fresh garden produce this weekend than we could eat before it went bad. So I’ve found myself spending the majority of the last few days in the kitchen, cooking as much of these fruits and veggies as I can. 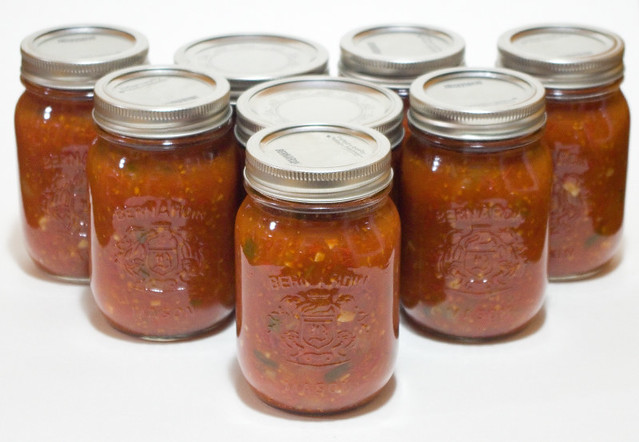 Since my freezer is getting pretty full so I wanted something shelf-stable, and my husband (the main salsa consumer in our house) really likes the Blender Salsa from page 92 of Preserving by the Pint: Quick Seasonal Canning for Small Spaces (Marisa McClellan, 2014), making another big batch was a no-brainer. Once my hubby had snacked on some of the lovely cherry tomatoes, I cooked up the remainder into about four liters of salsa. That’s not nearly enough to get us through the winter, but there are still more tomatoes on the vine to ripen, after all. 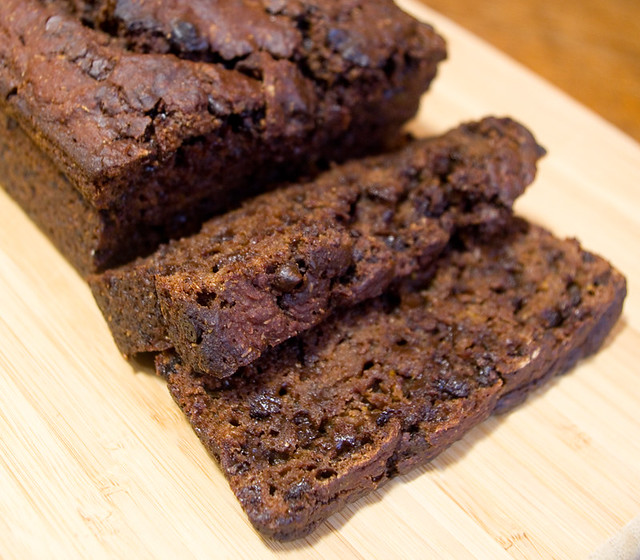 I baked a loaf of Chocolate Zucchini Bread (page 104 of 125 Best Quick Bread Recipes by Donna Washburn & Heather Butt (2002)). This is a heavy, rich bread that is satisfying either as a dessert or as a snack. I opted for semi-sweet mini chocolate chips, which makes this dish almost bitter, since it doesn’t include all that much added sugar. You can also use dark chocolate chips for an even deeper flavour, or switch it up with butterscotch, raspberry, or white chocolate chips. I was a little worried about the texture that the grated zucchini might have created, so I used the same technique as when I rebaked the chocolate fudge zucchini cookies and precooked the zucchini, then ran it through the blender. This added a bit of extra moisture to the bread, so I omitted the vegetable oil entirely. I was quite happy with how it turned out, both in flavour and in texture. 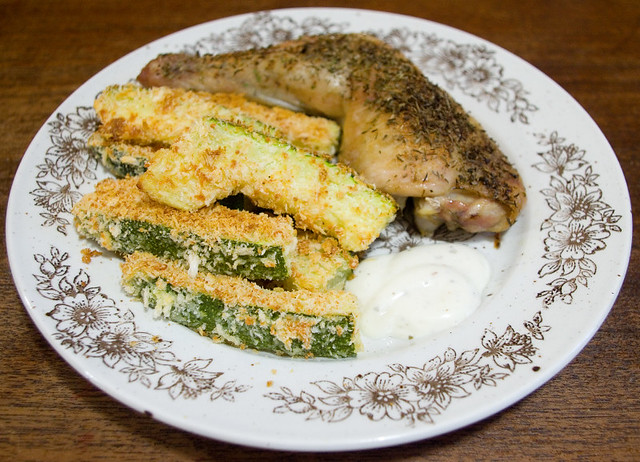 For dinner yesterday I also made baked chicken with my usual sprinkling of parsley, sage, rosemary, thyme, garlic powder, summer savoury, and salt as topping. As a side I made baked zucchini sticks, which my kids couldn’t get enough of, so I think I’ll be making them a few more times until I use up all of this zucchini (there’s still lots left). Instead of the more common (around here) seasoned bread crumbs, I went with panko, which is a much lighter style of Japanese bread crumb. I also baked the sticks instead of the more traditional deep-frying, for health reasons and because I just don’t particularly enjoy deep-frying. Here’s the very simple recipe that I used:

Baked Panko Zucchini Sticks
Serves 4 as a side dish

Preheat oven to 425°F (220°C).
Wash and slice into thick sticks, leaving peel on:
– 400g zucchini
In a small mixing bowl, beat:
– 1 large egg
In a second small mixing bowl, combine:
– 3/4 cup panko
– 1/4 tsp salt
– 1/8 tsp black pepper
– 1/4 tsp garlic powder
– 4 Tbsp Kraft 100% Parmesan grated cheese*
Grease a cookie sheet lightly with olive oil or cooking spray.
Dry the zucchini on paper towel, then dip it into the egg until coated, then into the panko mixture until coated. Place the coated zucchini sticks in a single layer on the greased cookie sheet. Sticks will cook most evenly and be most crunchy if they are not touching.
Bake the zucchini sticks for 15-20 minutes, or until topping is golden brown.
Serve plain, or with ranch dressing or marinara sauce as a dipping sauce.

*Parmesan cheese may be omitted, but if so, double the amount of salt.