It’s that time of year again when everything seems to be ripe at once and it’s physically impossible to eat it all before it goes bad. Case in point: my tomatoes. I grow predominantly cherry tomatoes, although a friend did give me one black tomato plant that has done very well this year. I just find cherry tomatoes to be more flavourful than most of the larger varieties. And I plant tonnes, since I know that I’ll want to include them in a number of preserves come fall. 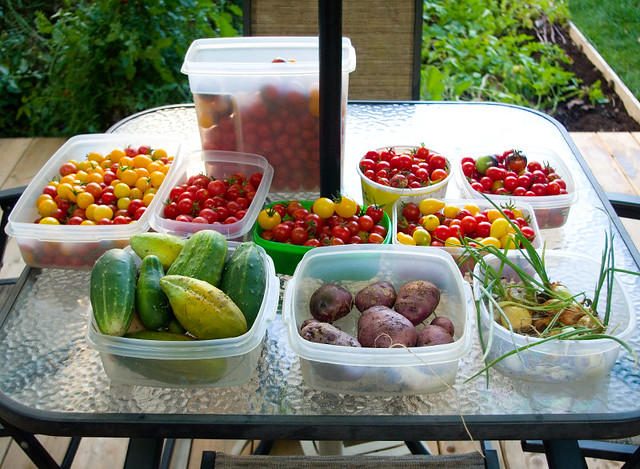 Case in point: this is what I brought in from the garden the other day. I think that these tomatoes, and probably the onions as well, will soon become spaghetti sauce. I might even go for the healthy veggie tomato sauce I made last year, and include the eggplant that should be ripe in a few days. (I had a lovely huge one ready to go, and then an animal go to it. Figures.)

At the same time, I had a few small radishes, the last of the cucumbers (the vines were starting to die back), and a few potatoes that were beginning to poke through the surface of the dirt. Something needs to be done with all of this produce before it rots! 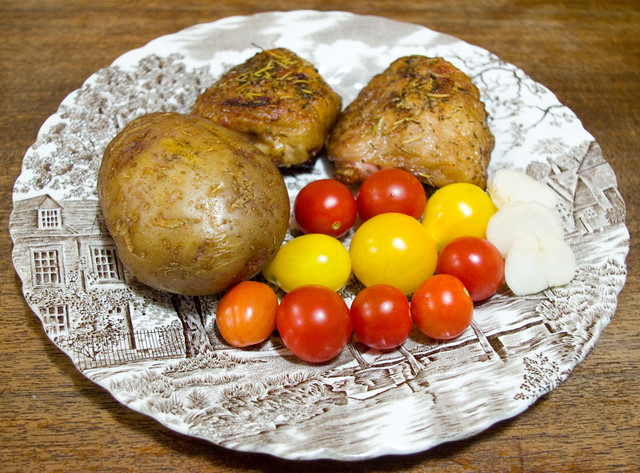 The first step for me is to make at least one dinner with the fresh ingredients. I barbecued some chicken thighs with my usual spice mix (parsley, sage, rosemary, thyme, garlic powder, and sea salt), and cooked up some of the potatoes on the grill at the same time. I know that they look very similar post-grill, but the difference was immediately apparent once they were cut open. I added some cherry tomatoes and sliced radishes as a veggie once everything else was cooked. It was a very simple meal, but it was both tasty and easy to prepare — which I needed after spending a couple of hours in the garden!