This past Friday, September 21st, the Ottawa-Gatineau area experienced two tornadoes. We’d had tornado warnings in the past which never amounted to much more than a nasty storm with high winds, so I honestly had expected the warnings to be down-graded just like every other time. Actually, I was out photographing the promotional photos for my last post minutes before the storm struck. I was editing them as the wind picked up, thunder rumbled, and the deluge started.

My family was extremely lucky: the tornadoes never came close to us. The stronger tornado, a high E/F3, flattened parts of Dunrobin, and then moved on to Gatineau. The second twister, a E/F2, moved through the southwest end of Ottawa.

The thing that I think a lot of people not from around here don’t understand — especially those in the central part of the US, where they get something like 500 tornadoes a year — is that tornadoes are extremely rare around here. So far as I can tell, we’ve never even had one of any strength touch down in Ottawa (although there was an F1 that hit Gloucester in 2000). Because of this, we’re really not prepared for them! Our natural disasters tend more towards slower, cumulative events, like extremely cold and harsh winters, ice storms, and floods. Nobody has a storm cellar, although most single family homes have a basement or are built on a concrete slab — no crawlspaces under homes here unless it’s a motor/mini home, since with our winters pipes and floors would freeze. We don’t have tornado sirens or drills; the emergency alert that was supposed to be sent to all cell phones in the area simply did not reach a lot of customers. I know that I got the message, but my husband didn’t; my father did, but not my mother. Many people continued on with their days as usual, knowing that a storm was brewing, but with no idea of how strong it would be. As a city, we are extremely lucky that no fatalities have been reported so far, although some people are in critical condition. 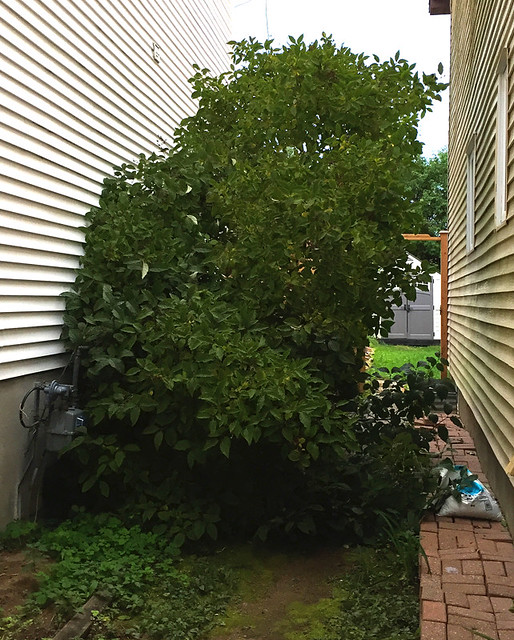 As I said, my family was extremely lucky. Our only consequences to the storm were a very short power outage (we’ve experienced worse from a regular thunderstorm) and the downed lilac bush in our side yard. It doesn’t even really look like it has fallen from the front, just a bit overgrown… 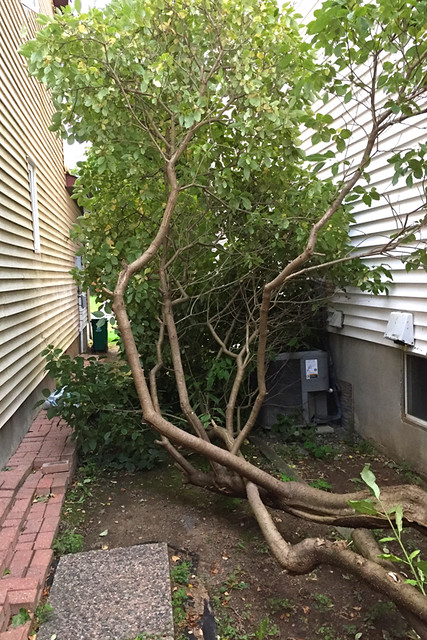 But it’s pretty obvious once you go push through the branches to the back yard and look toward the front. 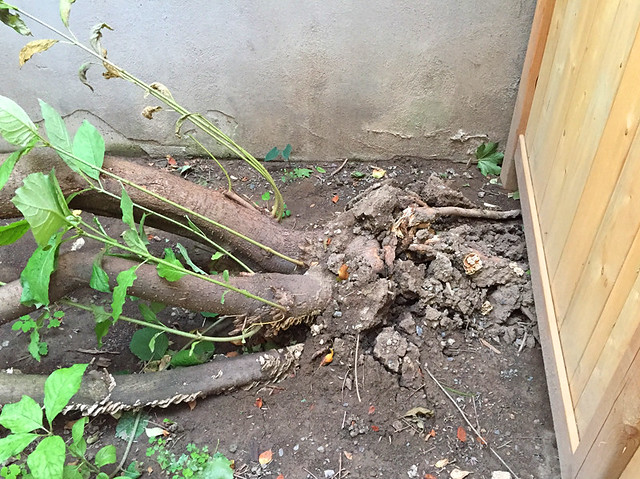 Despite the roots snapping, I count us extremely lucky because the bush (okay, it was over two stories, so it was more of a tree) fell away from the brand new back fence, and didn’t seem to do any damage to the houses as it fell down. Since it had multiple smaller trunks instead of one big one, it didn’t have the same impact as a true tree. I’m going to spend today cutting it apart and putting it out for garbage collection, and after that we should be able to tell if it damaged the neighbour’s air conditioner or gas meter at all.

Once again, I would like to reiterate that my family and friends are all fine, although many people I know experienced minor property damage and others went 48+ hours without power. My sincere thanks go out to the city’s emergency services, who responded quickly and efficiently to the disaster. I would also like to thank the electricity company employees who have been working tirelessly to restore power to the city, which was made especially difficult by the Merivale transmission station being taken out by the tornado. They’ve managed to route power around this station and restore power to hundreds of thousands of customers in just over two days, which is exceptional, in my personal opinion.

If you want to help those who have been affected by the tornadoes, here are some ways you can do so:

– Donate money to the Canadian Red Cross, who are providing hot meals to those in need.
– Donate food or money to the Ottawa Food Bank, who are providing supplies so that the Salvation Army can distribute hot meals, as well as helping people in need to replace the food that they have lost due to the power outages.
– Donate food to the Kanata Food Cupboard, who will redistribute the food to those most in need.
– Donate furniture, clothing, or household items to Salvation Army Thrift Stores; if you have larger items, you can arrange to have them picked up for free by calling 1-613-247-1435 ext. 228.
– Donate personal hygiene products and non-perishable foods (they now have more than enough donated clothing) in the former Sears location on the ground floor of Galeries de Hull (320 boul. Saint-Joseph, Hull sector) in Gatineau.
– Donate money to the Ottawa Senators’ GoFundMe, who have pledged to match donations up to $25,000.