Yesterday I made a visit to Costco, and was it ever slammed! I guess a lot of people lost a lot of their perishables to the power outage, and had to stock up. Not only that, but with the power out for so much of the weekend and a request for people to stay off of the roads Monday, most people weren’t able to do their weekend grocery shopping.

While I was at Costco, I picked up a rotisserie chicken, which at $7.99 for a fully cooked bird is the best price around, so far as I know. I honestly am not certain whether buying poultry cooked at a grocery store is more energy-efficient than cooking it at home, but I have an inkling that it is. If not, well, at least I wasn’t cooking it near dinner time, which tends to be a peak time for energy usage because so many of us have electric stoves and microwaves.

From what I understand, the rerouting of power around the downed Merivale power station means that the grid is just holding until the station is repaired. However, a large spike in energy usage, such as everyone running their A/C on a hot day, would likely black out the city again. So, to do my part I’m trying to be as conservative with my electricity as possible. (And did I mention that the tornado count for last Friday has gone up from two to six?) 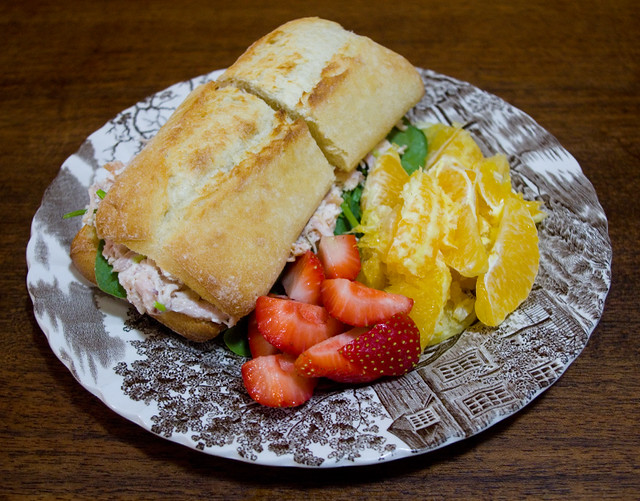 At any rate, I decided to do another cold dinner, so I stripped the chicken carcass and chopped up all of the meat into bite-sized pieces. Then I mixed them with some chopped green onions and mayonnaise. I served the chicken salad with baby spinach on toasted ciabatta bread (also from Costco). As sides, I peeled oranges and sliced strawberries.

The weather yesterday was rainy and dull, so while cooking outdoors could have been done if necessary, I wasn’t really looking forward to it. Sadly, tomorrow’s weather isn’t predicted to be any nicer; actually, we’re supposed to get thunder and lightning again. Yay?