As I’ve previously mentioned, I’m a big fan of thrillers and horror movies, and 1975’s Jaws was a pioneer of the genre. With its big-name director, iconic movie monster, and unforgettable score, this movie is definitely noteworthy in the history of film. However, what a lot of people forget is that it’s based on a 1974 novel by Peter Benchley, which was itself inspired by the 1916 New Jersey shark attacks. I knew that when I got an opportunity, I absolutely had to visit the location where it all started.

Shark attacks have become somewhat expected in open ocean water, although in reality the likelihood of a shark attack is much lower than the hype would have us believe. However, in the summer of 1916 there was an intense heat wave and a polio epidemic in New Jersey and nearby New York City, which sent those who could manage it out to the seaside to swim and take in the ocean breezes. Perhaps the upsurge of people in the water attracted the sharks — or at the very least gave plenty of targets to the sharks that already lived in the area. Over twelve days in July, four people were killed and one seriously injured off the Jersey shore. Newspapers of the time, sensing a sensation, ran stories about fishermen catching all kinds of “man-eating” sharks, even though many of the photos had been taken long before the attacks. The panic level was high.

The attack of Charles Vansant off of Beach Haven on July 1st and the attack of Charles Bruder off of Spring Lake on July 6th actually occurred in the while the men were swimming in the ocean, although they were very close to shore. However, what stands out the most to me is that the July 12th attacks on Lester Stillwell and Stanley Fisher happened in Matawan Creek, which is brackish or even fresh water depending on how far upstream you go. Joseph Dunn, who was was the only person to survive the attacks, was also swimming somewhat up the creek when he was bitten by the shark half an hour after the two fatal attacks there. 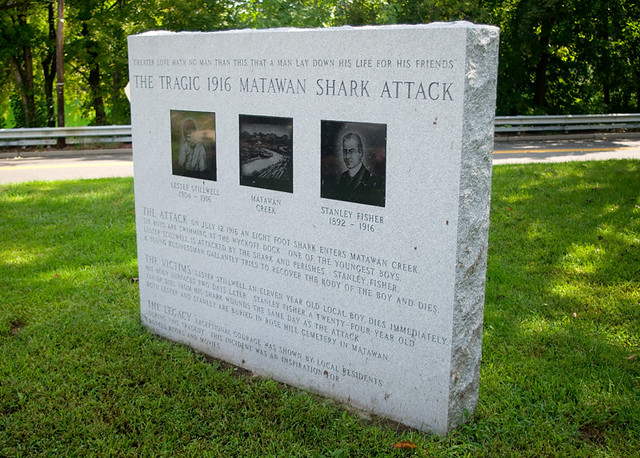 I can understand why the 1916 shark attacks gripped people of the time with such terror. After the first one, people were on guard; after the second proved that it wasn’t just a one-time event, most wise people along the ocean eschewed ocean swimming altogether. But no one could have predicted that there would be a shark in the fresh water of Matawan Creek. In the middle of a heat wave and long before the invention of air conditioning, all these poor people wanted to do was cool off.

There is a memorial to the two Matawan shark attack fatalities in the town’s Memorial Park. This park also includes tributes to lives lost in WWI, WWII, and to two poor souls who were unlucky enough to be victims of 9/11. The memorial reads as follows:

The Attack: On July 12, 1916 an eight foot shark enters Matawan Creek. Six boys are swimming at the Wyckoff dock. One of the youngest boys, Lester Stillwell, is attacked by the shark and perishes. Stanley Fisher, a young businessman, gallantly tries to recover the body of the boy and dies.

The Legacy: Exceptional courage was shown by local residents during this tragedy. This incident was an inspiration for novels, books and movies.

On July 14th, a 300lb bull shark (which can survive in both fresh water and saltwater) was caught, and when it was dissected 15lbs of human remains were found in its stomach. While that might not have been the only shark to attack a human over this period, there were no further attacks after it was caught. 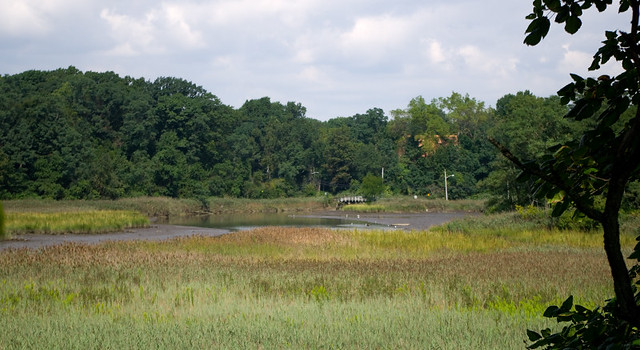 This is what Matawan Creek looks like today; in all honesty, it’s unremarkable in almost every way, except for its history. This is the section of the creek that is visible from the Main Street bridge over Gravelly Brook; the bridge in the background is Aberdeen Road. The attacks actually happened a bit further east from what you can see from the memorial site, just west of where the Garden State Parkway goes over the water. 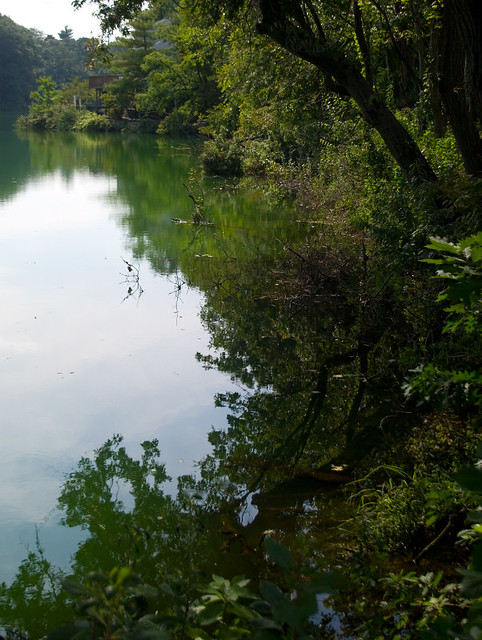 Visually, the only thing that stands out about this area is Lake Matawan, which is the body of water you can see behind the trees in the photo of the memorial. It looks like a bright green lawn that’s visible between the branches, but no, that is actually water. It is a brilliant shade of opaque emerald that I have never seen anywhere else. A bit of research leads me to understand that the lake is quite polluted and has a high copper content, and it is also actually highly acidic, meaning that very little aquatic life survives there except for one particularly brilliantly green variety of filamentous algae. The water here really looks like it should be in a canister labelled “TGRI”. 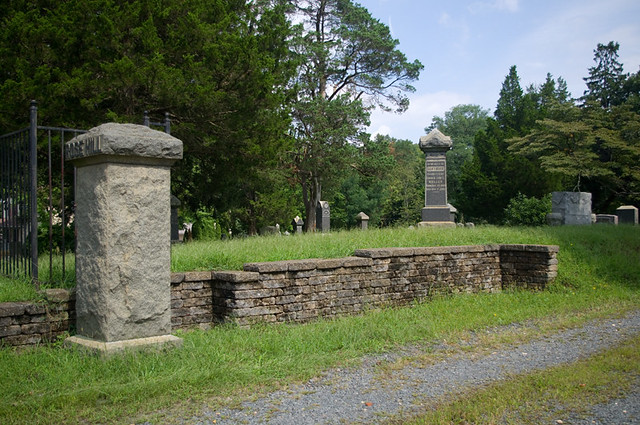 Not far from Memorial Park is Rose Hill Cemetery where Stillwell and Fisher’s graves are located. The cemetery is easily accessed via Ravine Drive. There are “No Trespassing” signs at entrance, but there are no gates. This seemingly mixed message is because apparently there was vandalism occurring in this graveyard, especially back in the 1970’s. However, polite, respectful guests are welcome to visit (or jog, or walk their dogs) on the property. Keep in mind, though, that this is still an active cemetery — graves were actually being dug while I was there — so if you do make this visit, please steer clear of mourners and leave them in peace. (Luckily there were no mourners onsite for me to disturb during my visit.) 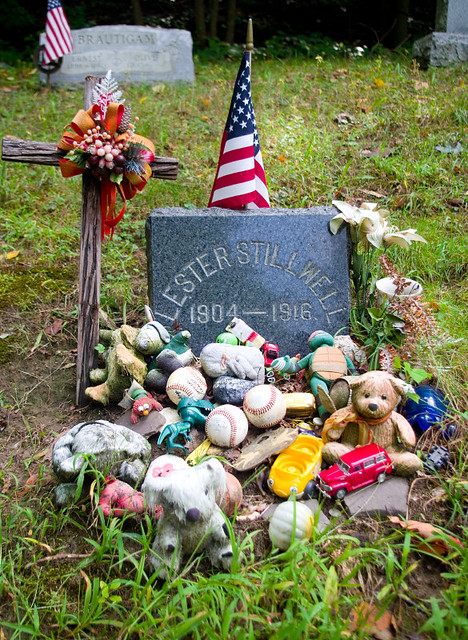 Popular interest in the shark attacks is evident by the mementos left at Lester Stillwell’s grave. Since the poor child died over a hundred years ago, it’s highly doubtful that family or friends who knew him are still visiting his gravestone. While I was the only person in the graveyard other than the gravediggers (do they still call them that?), there had obviously been many visitors recently, probably over the summer, since the items weren’t too faded. 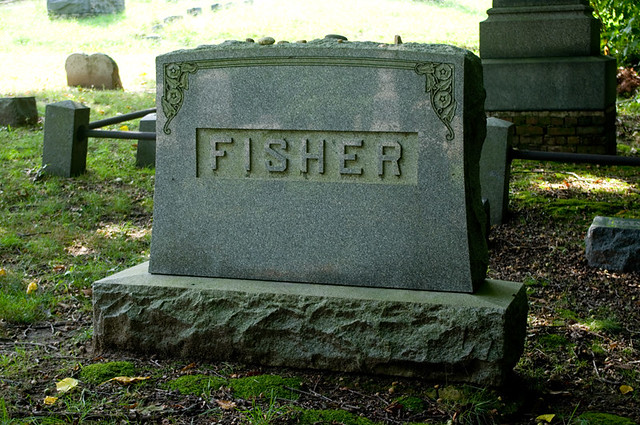 Stanley Fisher was buried in a family plot just up the hill from Stillwell, so the family stone is the most prominent one. 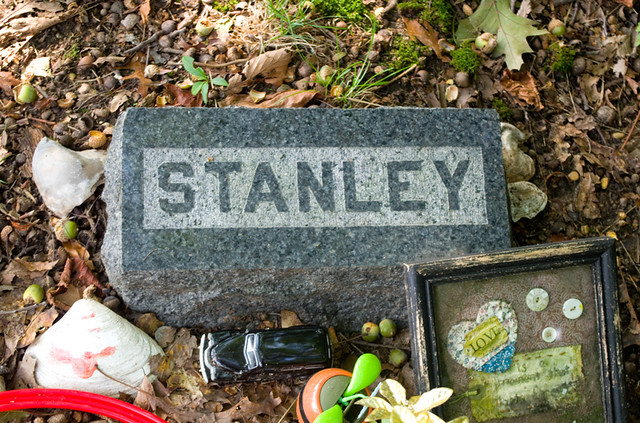 Fisher’s personal marker is a bit behind the stone bearing the family name, and it too shows evidence of recent visits, although not as much so as Stillwell’s. There were also a number of pebbles placed atop the family stone, much like at the Evans/Ellis cemetery.

Now, as for rumours that this is “one of the most haunted cemeteries in the United States”? Don’t believe the hype. Even if I put stock in such things (which I don’t), this is a well-maintained, peaceful, not-at-all-scary cemetery. Tragic stories abound in this old graveyard, true; they don’t start and end with shark attack victims. Some of the graves date back to the 1700’s, and with a long enough history there are inevitably tales to be told. At the very least there are soldiers from the Revolutionary and Civil War buried there. But the reality is that all graveyards contain stories, because stories are how we remember the people who have passed. And sometimes those stories just so happen to be so gripping that they transcend the circle of people that we knew in life and become the basis for a tale that enthralls and terrifies audiences worldwide. I think that’s as close to a haunting as one can reasonably expect.