Yesterday I decided I wanted to try to make something a bit more complicated with my new Instant Pot (or, as my husband puts it, I wanted to play with my new toys). Since I had some red wine left over from Christmas that needed to be used up, and nobody in our household drinks wine, I Googled and found a nice recipe for Instant Pot Beef Bourguignon from Instant Pot Eats. I dug a couple of large chunks of beef out of the freezer the night before to thaw, and I had most of the other ingredients already at home. I did have to send the hubby out for tinned tomatoes and fresh carrots, and somehow we had run out of tomatoes. 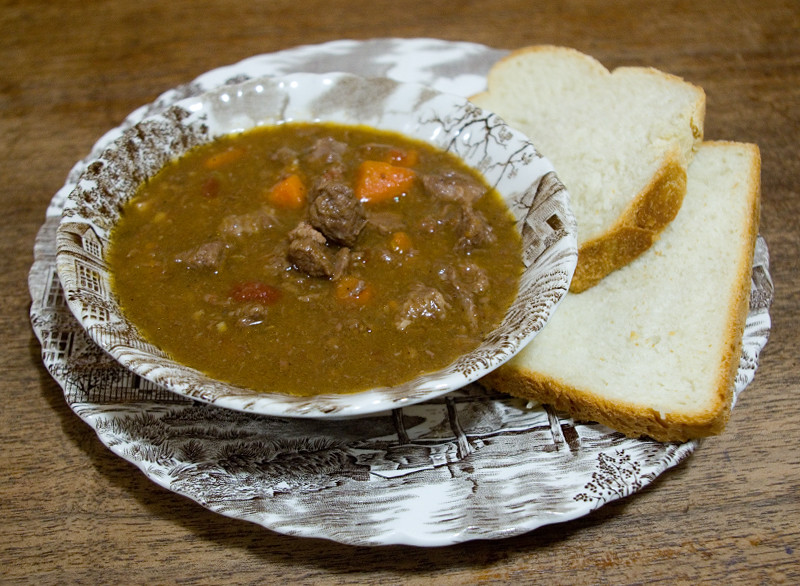 I’d never made this dish before, but for all that I’ve heard that beef bourguignon is a complicated dish, I discovered that it’s really just a fancy kind of stew — and I’ve made many stews over the years. Making it in the Instant Pot really sped things up, but I could have done something very similar in the slow cooker, so long as I planned ahead. I really appreciated that I could saute the ingredients and pressure cook them all in the same device, though, since that saved me quite a bit of effort and clean-up time. Actually, I overestimated how long it would all take me, so I took advantage of the “keep warm” function as well.

I don’t exactly have a base for comparison, but I would deem it a definite success! The recipe’s serving suggestions are either with mashed potatoes, fresh bread, pasta, parsley dumplings, steamed vegetables, cauliflower rice, or cabbage with butter and pepper. I took advantage of my bread machine and served it with slices of freshly-baked white bread (page 66, Bread Machine: How to Prepare and Bake the Perfect Loaf by Jennie Shapter, 2002). While this combination was lovely, I think I’d like to try it over mashed potatoes next time, in the same style Beef and Guinness Stew. And yes, there will be a next time, judging by the family appreciation of this dish! The meat was tender, the sauce flavourful, and it was nice and filling on a cold winter’s day. My husband ate so much that he was groaning afterwards about how full his stomach was, and yet he regretted nothing.