I threw a couple of waffles in the toaster the other day (they’re a special treat around here), at which point I realized that the kids had finished the last of the jar of maple syrup that had been in the fridge. So I went into the cupboard to refill the smaller fridge container, and I found this: 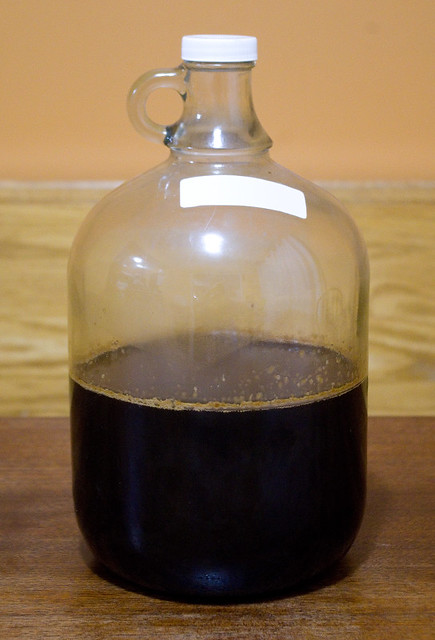 It looks a little dodgy, with that ring of residue around the side, doesn’t it? But I shrugged it off, thinking that some of the top level had crystallized, since it has happened before. But when I opened the jug there was a puff of released gas and a distinct smell of alcohol. It had started to ferment.

I have never in my life had this happen before. I have kept open maple syrup both in the fridge and in the cupboard for years, and the worst thing that has ever happened is that it has crystallized. I honestly thought that it was like honey. I think that this is the combination of having left it in the cupboard and buying it from a farmer’s market*. Don’t get me wrong, I love farmer’s market food! But most of the time there isn’t the same quality control from batch to batch, and this batch could have been bottled too soon. If the temperature didn’t get high enough and/or the ratio of water to syrup was too high, bacteria could survive and the syrup would spoil faster. In a commercial setting, such factors are much more highly regulated.

After discovering this I did some reading and realized that maple syrup can intentionally be fermented to create maple mead, but this is usually done by introducing a specific kind of bacteria (yeast). Since I had no idea what kind of bacteria were in this bottle — and were now creating slow-moving bubbles, once the cap was open — I had to rinse it all down the drain.

I’m kicking myself especially hard about this one because there was so much left in the jug (well over a liter), and because it is Canada. In winter. I could have just left the stupid thing in our uninsulated garage and it would probably have been fine. But I ran out of space in the fridge over the Christmas holidays and left the biggest bottle in the cupboard instead.

*This was bought from an out-of-town market, and I won’t name the source because heck, this could have been entirely the fault of my food safety practices. But I would like to note for the record that I have never, ever, had any of our local producers’ syrup go bad. Actually, no syrup of any kind has ever gone bad on me before this — which is why it surprised me so much!