Last night I wanted to do something a little different for Sunday dinner, but I still wanted it to be warm and hearty. The temperatures on the weekend had dipped below -30°C (-22°F), which calls for solid comfort food in my opinion. On Saturday afternoon I delved into my new Christmas-gift-card acquisition, The Complete Indian Instant Pot Cookbook: 130 Traditional & Modern Recipes (Chandra Ram, 2018) and picked rogan ghosh, aka lamb stew (page 2019) and rotis from the plethora of recipes that I wanted to try. It was the first time I ever attempted to cook an Indian dish from scratch, although I’ve used pre-packaged sauces and curry pastes many times. 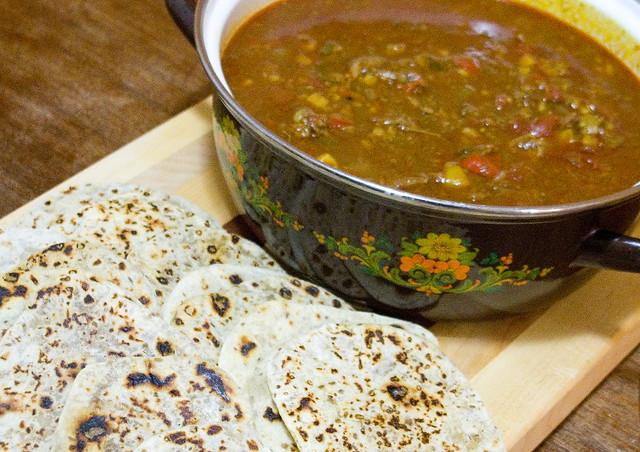 It’s a good thing that I started prepping on Saturday, because I had a really hard time finding some of the ingredients! I discovered quickly that most chain supermarkets around here don’t carry lamb shoulder, and as it turns out some of the more specialty stores like the Mid-East Food Centre, where I’ve had great luck in the past, had been shorted on their order that week. I hit at least six stores before I ended up at George’s Meat Shop, which luckily had the lamb in stock. Neither they nor any of the other places I visited carried serrano chilies, nor did the next three, at which point I admit that I just gave up and asked Google for a good substitution. Apparently jalapeno peppers are similar in taste but not nearly as hot, so I went with those and simply doubled the amount of peppers. Luckily that worked out okay. But if anyone has any suggestions as to where in the Ottawa area carries serrano chilies, please let me know!

I chopped up my meat and slathered it with marinade on Saturday night, leaving the prepping of the spices and the vegetables until Sunday. What with the speed of the Instant Pot, all of that chopping took significantly longer than the actual cook time of the dish. The finished product was definitely worth it, though. My whole family loved it, and it wasn’t too spicy for anyone (always something I have to take into account with our rather over-sensitive tongues). I was pretty sure it wouldn’t be too spicy, though, given that we all eat lots of jalapenos my homemade salsa. I think that the only mediocre part of this meal (although not at all horrible) was my rotis, which in retrospect I didn’t roll nearly thin enough. I loved their flavour, but I need a lot more practice to make rotis I’m actually proud of.

After some Googling, I’ve learned that apparently you can make the stew using mutton, goat, or even beef. I really liked the rich flavour of the lamb, so I can’t see using beef instead unless it’s out of budgetary consideration, but I like the gaminess of mutton and goat, so I might eventually give them a go. I assume that these would have a longer cook time because the meat is tougher, though.