Day 2 of camping at at the Achray Campground on Grand Lake in Algonquin Provincial Park dawned rainy, but the precipitation quickly moved on. This left us with clouds in the morning, a brief rainstorm in the afternoon, and a mix of sun and clouds for the afternoon and evening. Unfortunately, there was never much of a breeze, so nothing we brought with us really dried out, but we had fun anyway. 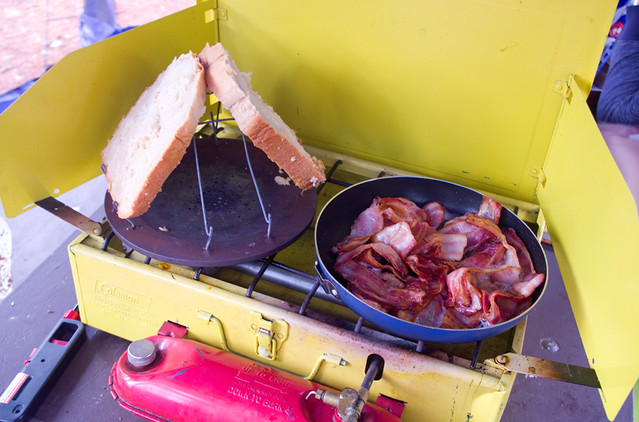 The day began with cooking bacon, eggs, and toast (with bread machine bread baked in advance of our trip) on the old Coleman camp stove. I am particularly fond of the camp toaster, which was always my favourite part of the setup as a child. 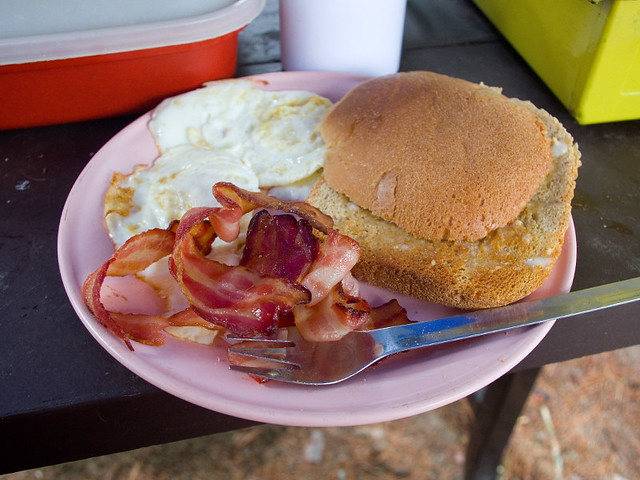 It was a hearty and delicious way to start the day!

After cleanup we headed out to the lake, which is where we spent the majority of our day. 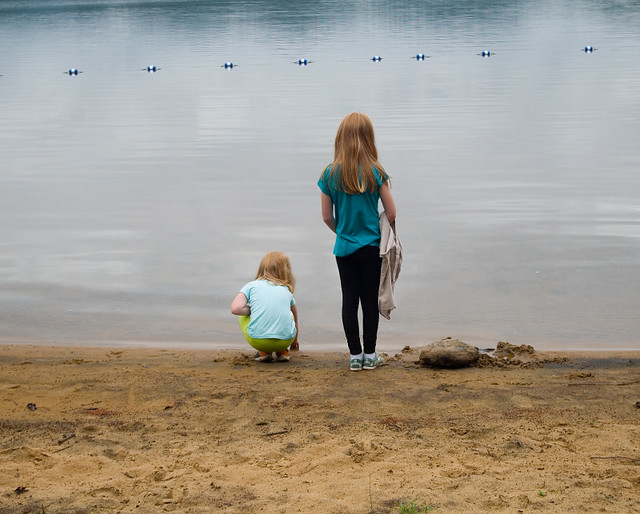 The shallow, sandy beaches meant that the kids were quite content to play and explore for hours. 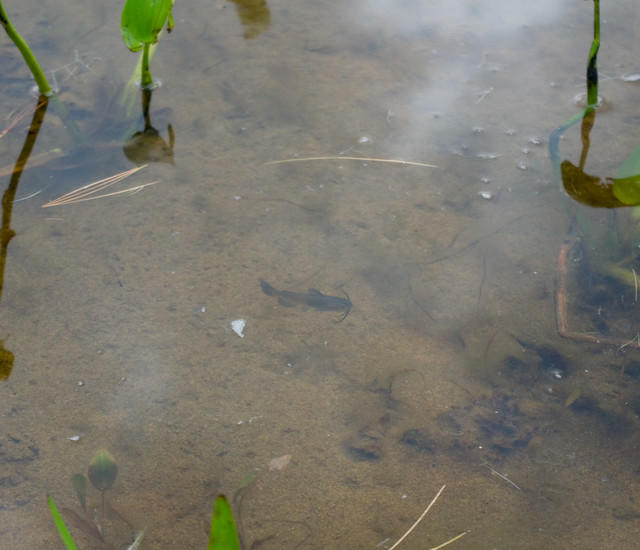 We found teeny tiny catfish (at most an inch and a half long) in the weedy shallows, where they were industriously cleaning the lake bed. 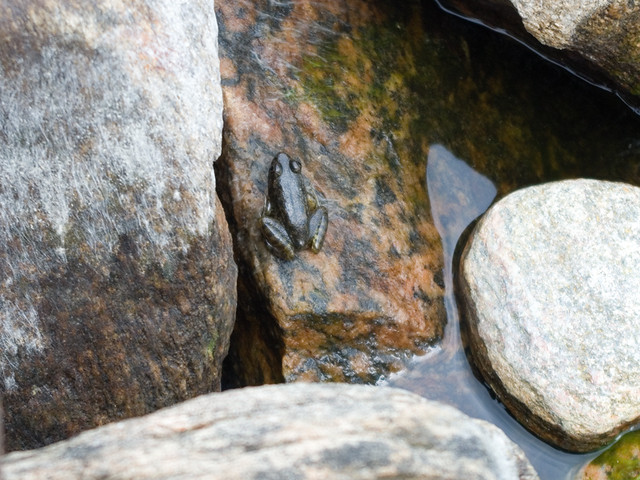 There were also tonnes of tadpoles in every stage of becoming frogs — some had no legs, some had two, some had four, and some were basically frogs with tails — alongside full-grown frogs. A few swam by us while we were swimming, while others stuck to the weedier or rockier areas.

I honestly think that our favourite part of the day was all of the tiny minnows that swam around our feet and nibbled on our toes while we waded in the shallows. Video of that will have to wait until I can get it off of my other camera, but I think it’ll be what the kids remember the most from this trip. 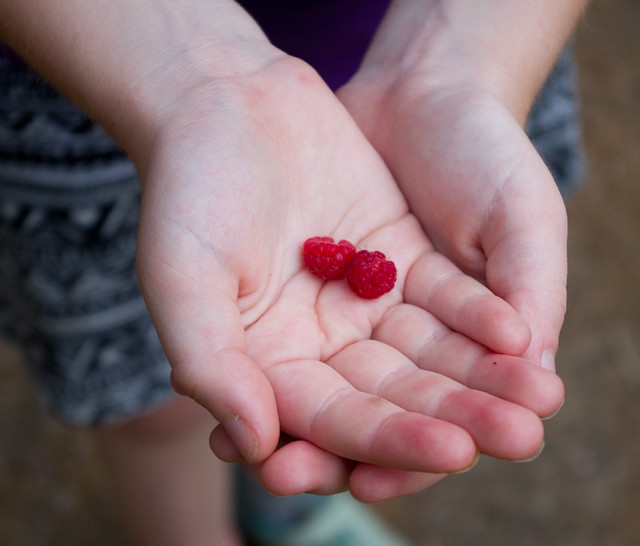 When we headed away from the water we found wild raspberries, which was an unexpected and tasty treat. 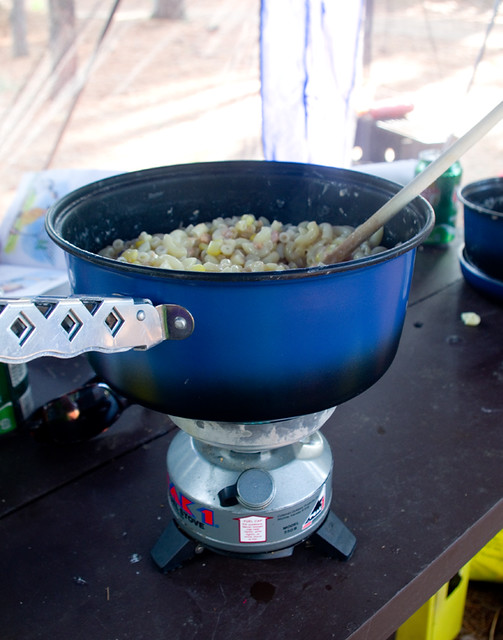 I cooked dinner over the single-burner backpacking stove, since the old Coleman decided to act up for a bit. I basically made tuna noodle casserole, but with frozen corn instead of canned, and canned salmon instead of tuna. Also, having no oven, I couldn’t bake the dish. 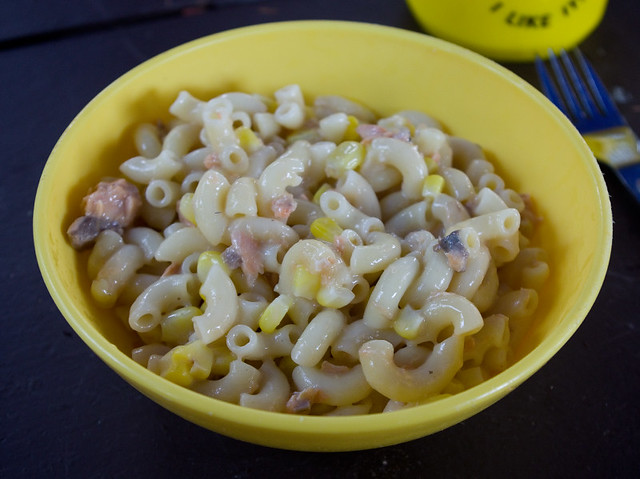 I don’t think that my alterations improved the dish any; without the potato chips topping and baking to combine the flavours, it was pretty bland. I should at least have grated some cheese on top, but I didn’t think of it. But it was warm and filling and we were sitting somewhere dry, which sometimes is all you can ask for when camping. As a bonus, the only perishable ingredient was the frozen corn, which in its turn helped keep the other food cold. 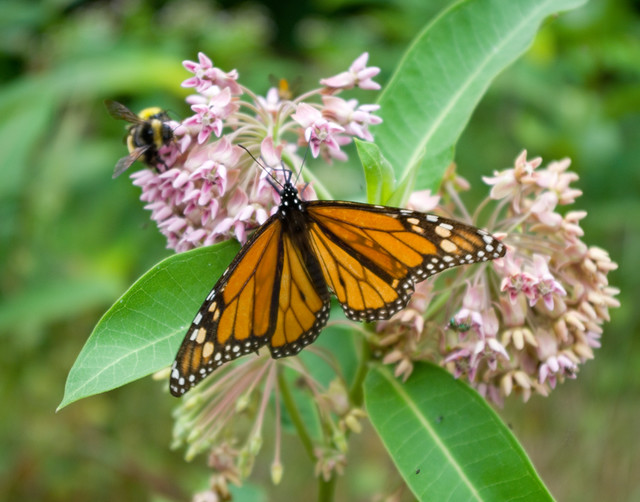 Also, did I mention that there were butterflies? Well, there were a lot of butterflies. The monarchs in the area really like the milkweed blossoms, which were just coming out of bloom, and milkweed was everywhere. Apparently these monarchs are endangered, but you’d never know it from how plentiful they were around our little corner of the park.

There are a lot of public parks in the Ottawa area; a lot of them even have splash pads and water features. This means that if you’re looking to do something with the kids (or even just to get outside yourself), there is always somewhere to go and something to do — so long as it’s not pouring rain. I take advantage of this on a regular basis. My kids are old enough now to pop off together to the closest park for an hour or two. However, their range is pretty small (they only just learned to ride bikes without training wheels earlier this summer), and I wouldn’t feel comfortable with them going much further or crossing major roads alone in any case. So whenever it’s nice out and the girls are getting restless, I head out to a park. 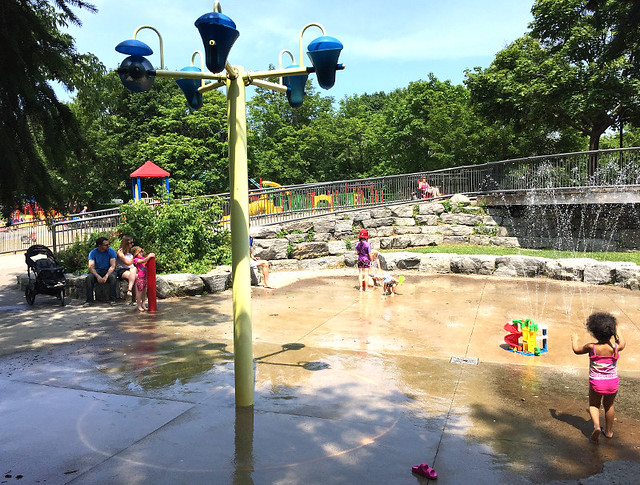 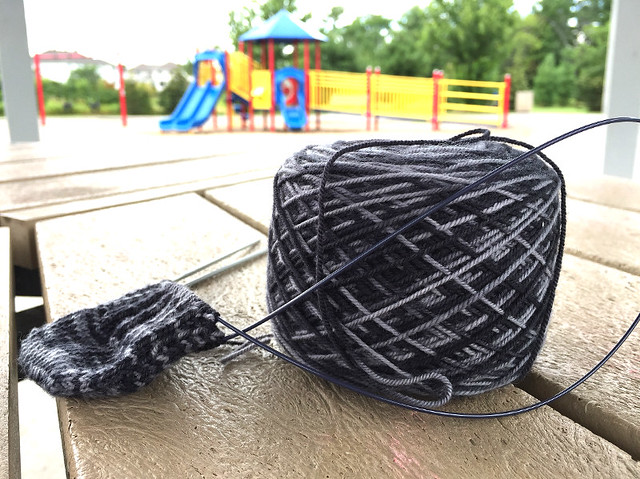 Knitting at Cardinal Creek Community Park. That day I was working on the start of an adult sock in Araucania Yars Huasco 100% extra-fine Merino wool (colour 101, dye lot 74403) on 3.5mm circular knitting needles.

We alternate between parks, sometimes staying close to home, sometimes packing a lunch and driving downtown or even across town to check out some new scenery. I stuff a novel, a knitting project, and my phone into my purse, which is enough to keep me entertained for hours. No matter where we go, I also have to bring about a tonne of sunscreen. It probably hasn’t escaped anyone that I’m a blonde and my kids are redheads, so sunscreen is not an option, it’s a necessity. The kids invariably come home soaking wet, exhausted, and happy. To me, that’s a successful summer day.