The other day my kids had what I thought was a gastro bug, but in retrospect may have been a mild case of food poisoning, mostly because I haven’t caught anything. Generally, if the kids catch something, so do I, since I’m the one who will have to nurse them back to health. If it was food poisoning, it can’t be because of anything I had cooked, because I ate all of the same foods as them that day and was perfectly fine. However, we did grab some cheap takeout that night for dinner, and I had a different dish than the one they shared. That was probably the culprit.

So food was a low priority for a couple of days. Instead of writing about that experience in any kind of detail (because nobody really wants that), I’ll tell you about a meal that I made a few days previous. 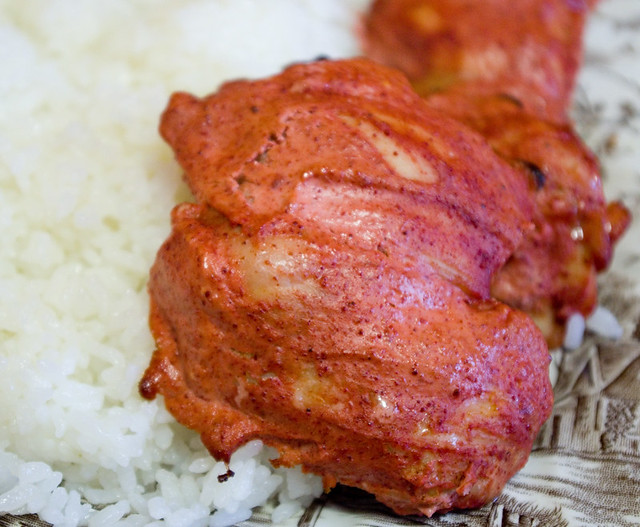 I went through my fridge and realized that I still had a half a jar of Pataks Tandoori Curry Paste, so I just had to make up some tandoori chicken. It’s one of my husband’s favourite dishes; in fact, he’s the one who introduced me to it. Apparently Pataks brand is very popular in the Netherlands, where he did a work placement for half a year during university. He was very happy to discover that a few places here in Ottawa carried it when he returned, although a dozen years on it’s become much more common.

This particular recipe calls for marinating in a sauce of yoghurt mixed with the tandoori paste. I’ve really appreciated that a number of brands of yoghurt have started to make a lactose-free variety so that I can enjoy dishes like this! Other than the chicken, which was simply baked in the oven after being marinaded overnight, I just had to cook up some rice and dinner was done. I probably should have included a veggie or two, but somehow I forgot until right as dinner was to be served. Ah, well. So long as we’re all getting enough fruits and vegetables overall, it doesn’t matter too much that we’ve missed it at one meal.