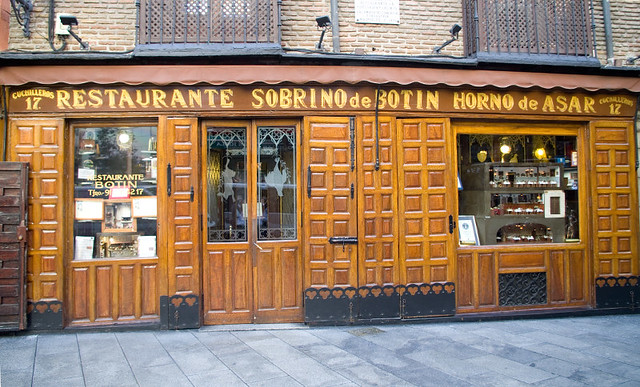 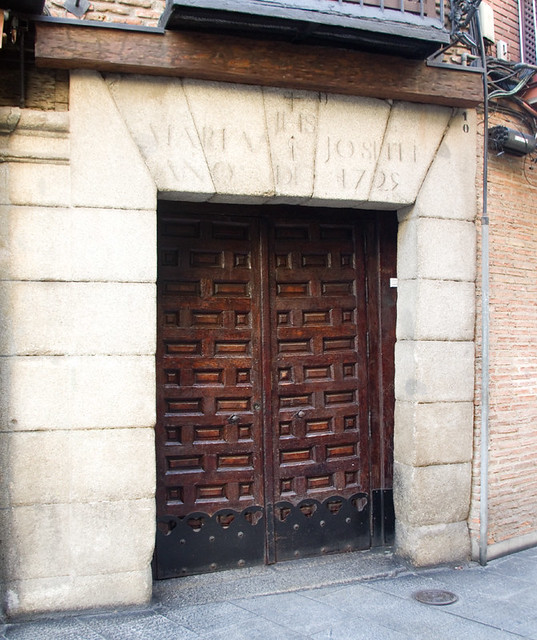 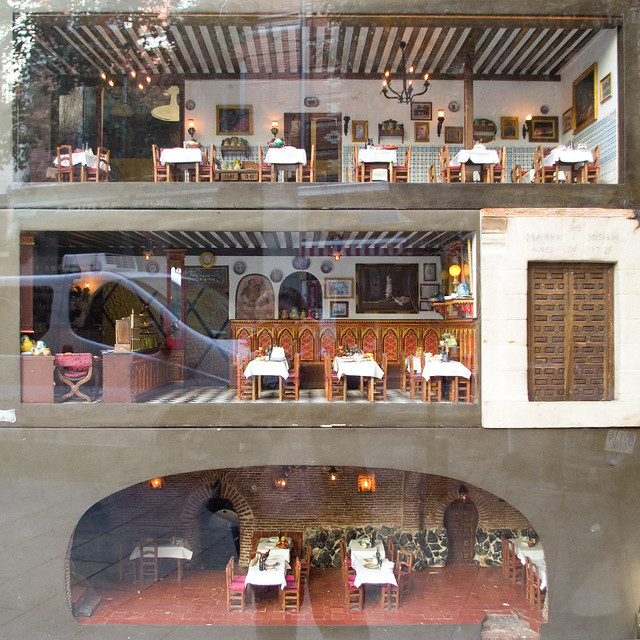 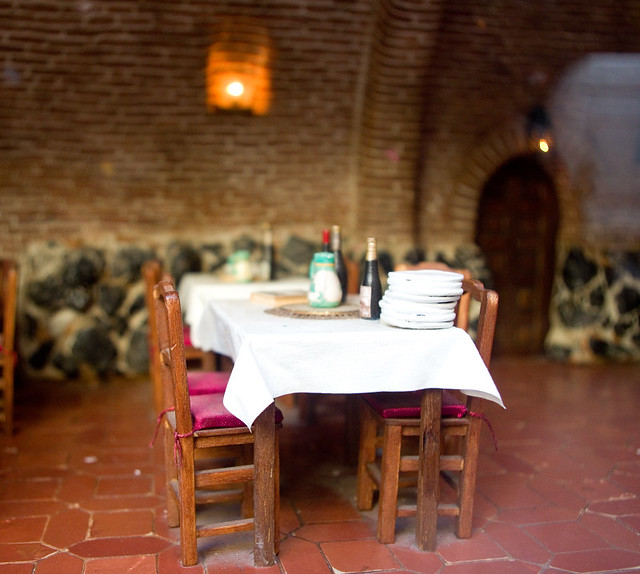 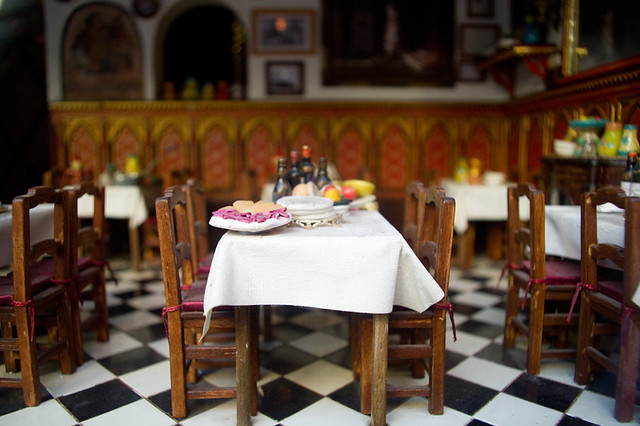 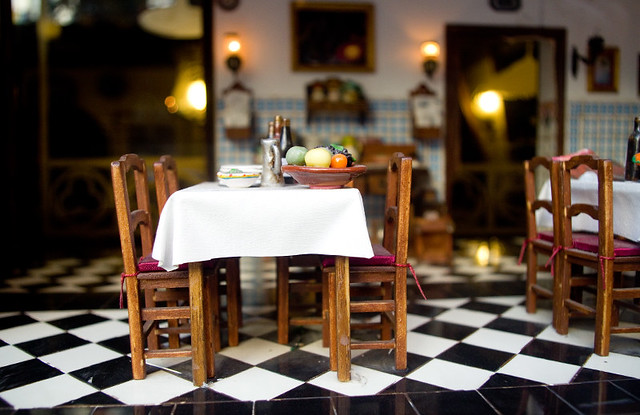 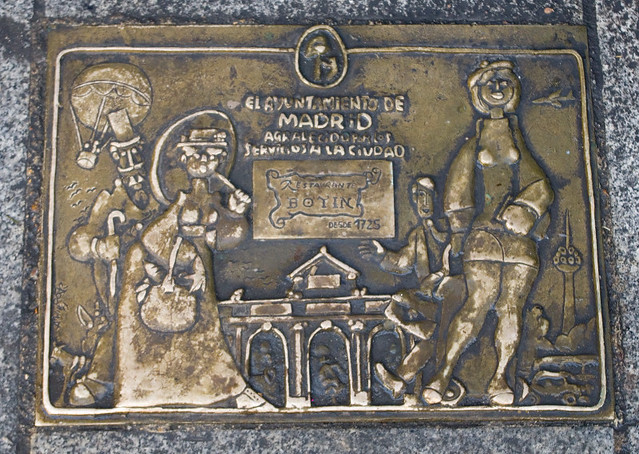 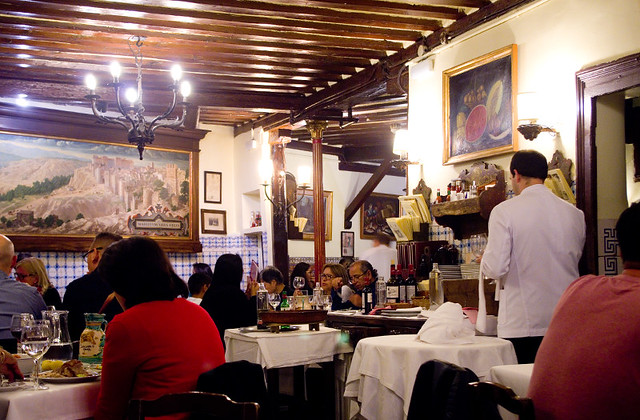 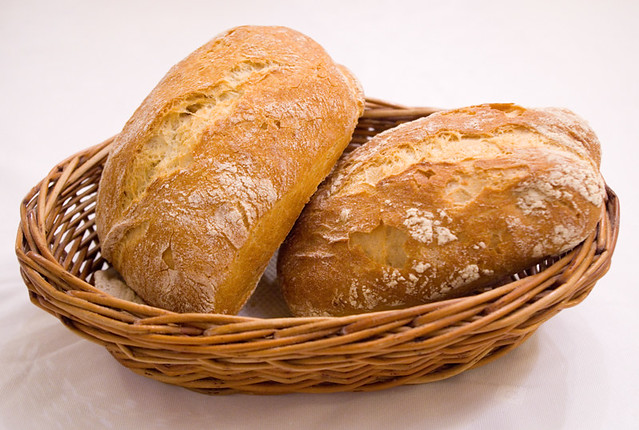 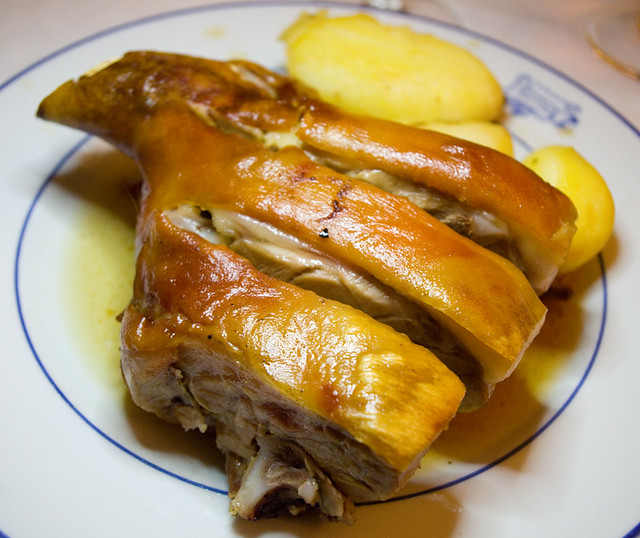 Like many tourists, one of my first stops during my visit to Spain was the Royal Palace of Madrid (“Palacio Real de Madrid” in Spanish). I actually visited twice on consecutive days, because I underestimated how long it would take to properly appreciate all of the exhibits and I wanted to give this beautiful complex the attention it deserved.

The Royal Palace is located right in the middle of the old city; buildings that are commercial on the ground floor and apartments (or sometimes hotels) above are separated only by a road and the public parks such as the Plaza de Oriente and Jardines de Sabatini. This means that you can get a good look at the palace even from outside of the gates. It’s possible to look right inside the Plaza de Armeria (the main courtyard) from the publicly-accessible area between the Catedral de la Almudena and the palace. The throne room is on the second floor right above the central doors, and looks over the courtyard and at the cathedral. 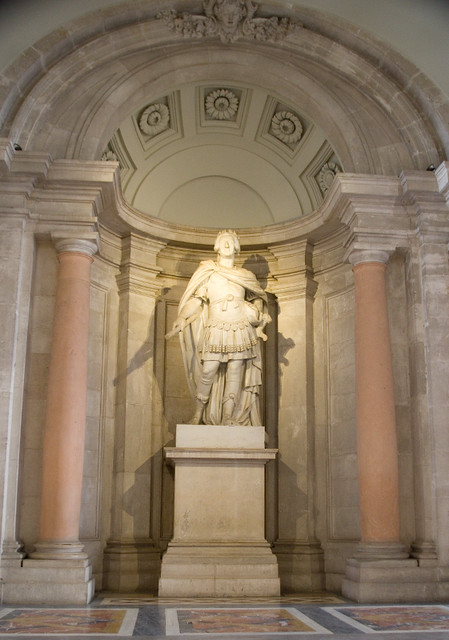 This is the statue of Charles III at the base of the grand staircase. 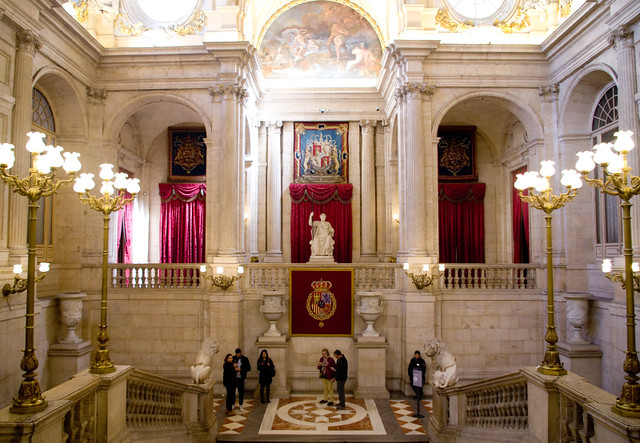 And this is the grand staircase from above, with a statue of Charles IV at the center. It is, quite simply, awe-inspiring in its grandeur. 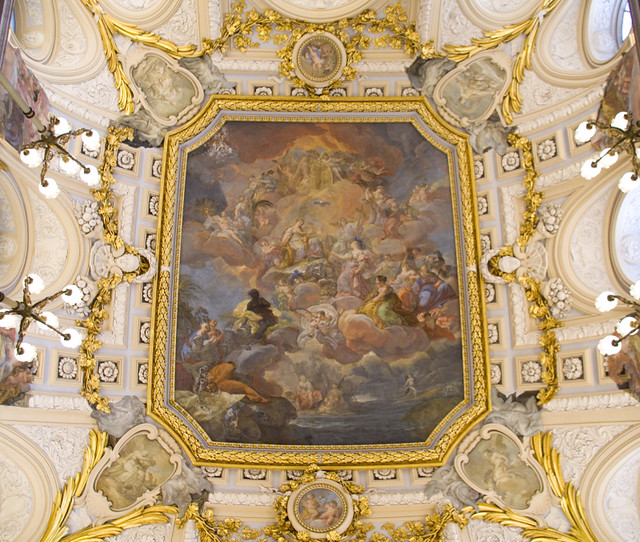 On ceiling above the grand staircase (and, indeed, most of the ceilings inside the palace) is a fresco. As this is probably the biggest single room that I saw, I’d venture to guess that it’s also the largest fresco. It is by Corrado Giaquinto and depicts Religion Protected by Spain (although I have to admit I had to look that up after the fact, I was so gobsmacked by the palace that I forgot less-consequential things like artists and titles).

After this, though, I have very few photos of the palace, since there were only a few areas where photos were allowed. Suffice it to say that it is an exercise in opulence and incredible attention to detail. Also on the palace grounds is the armory, which contains fantastic examples of full plate armour (for men, children, and horses) alongside swords, crossbows, and other weapons. Most of the items on display belonged to royalty or upper nobility, so they are beautifully detailed as well. Of course I wasn’t allowed to take photos in there either. 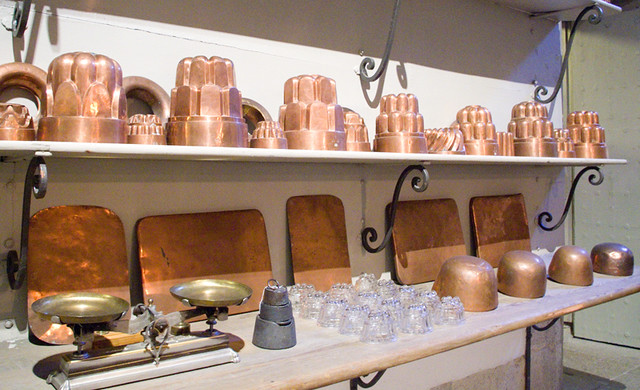 One place that photography was allowed was an extra to the basic tour that I just had to go see: the royal kitchens. They are absolutely huge, which makes sense because they once played host to hundreds of people working at hot, sweaty, tiring jobs that eventually produced all of the food that royalty and nobility at the palace ate. Above is a selection of the kinds of copper and glass molds that were in use. 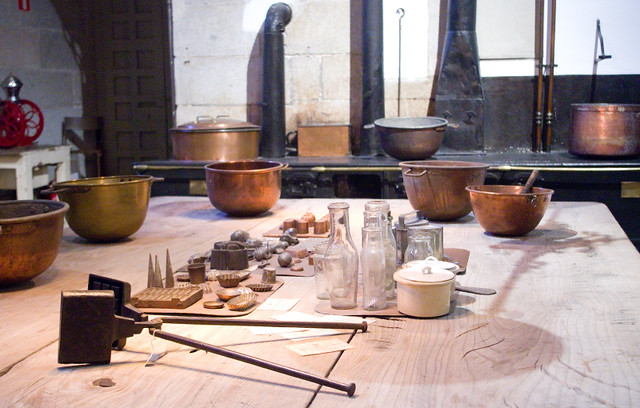 A wooden work table with the more delicate tools for preparing and decorating the foods prepared in the molds. 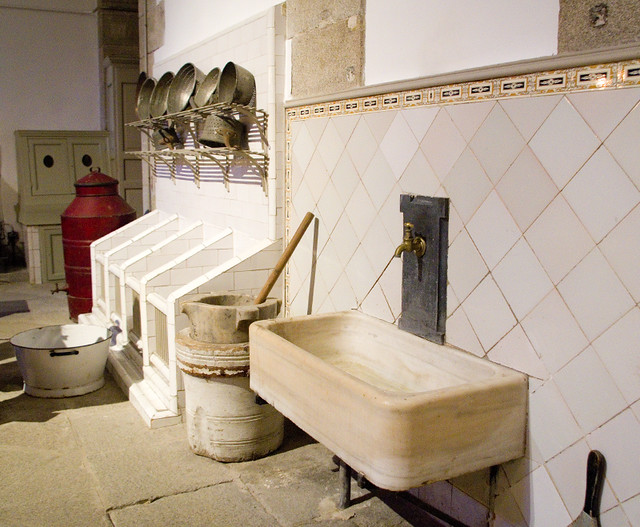 The station for washing vegetables. 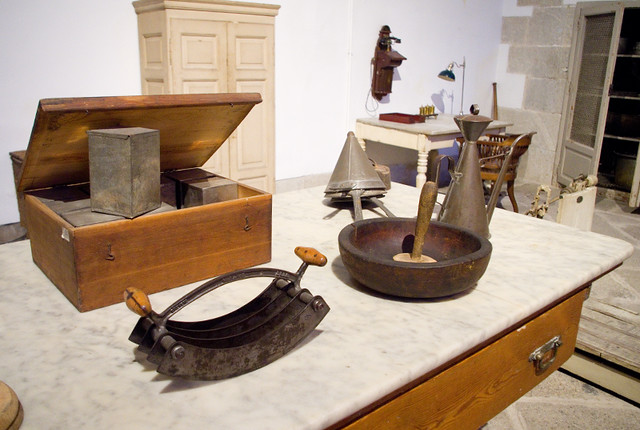 The pastry station with its marble counter top for keeping the pastry dough cool (much as we still use marble rolling pins or rolling pins filled with cold water for the same purpose today — it keeps the lard or butter from melting, which makes the dough flaky). 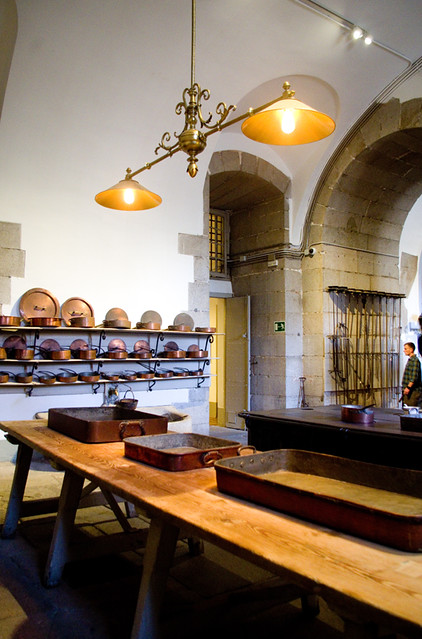 Prep table in the room with the main ovens and stoves. The big rack in the background holds all of the different kinds of spits for roasting above the massive fireplace. 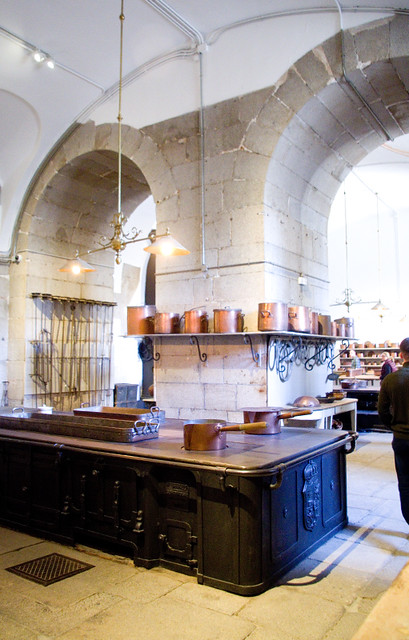 The stoves used wood as fuel and the smoke was vented through pipes that ran under the floor, which kept them from having to have overhead chimneys. I’m not sure how they managed to get the chimneys to draw correctly; apparently it was quite the feat of engineering. Notice the high ceilings for air flow; the kitchens were in the basement and the windows that light it and allow for air circulation are at ground level. 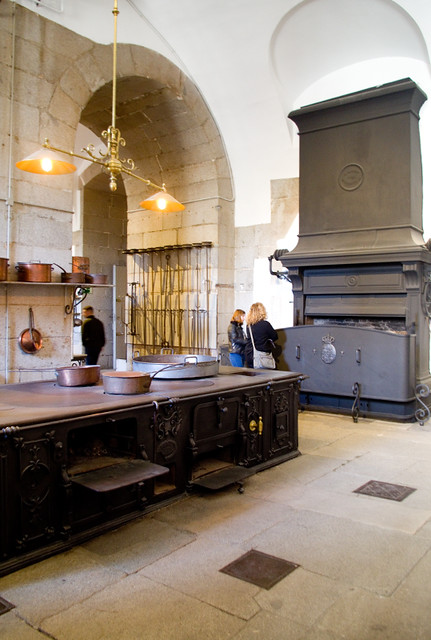 Here you can see another of the massive cast-iron stove/ovens, with the fireplace for spit-roasting in the background.

Back when these kitchens were in use, they were often written about by visitors who were impressed by how much work it took to feed the upper classes in the manner to which they were accustomed. They also wrote about how the kitchens ran like a well-oiled machine, or they compared it to a military operation. I personally have a hard time imagining the monumental task it must have been to make these kitchens anything but absolute chaos. My hat is off to the generations of people who worked here. 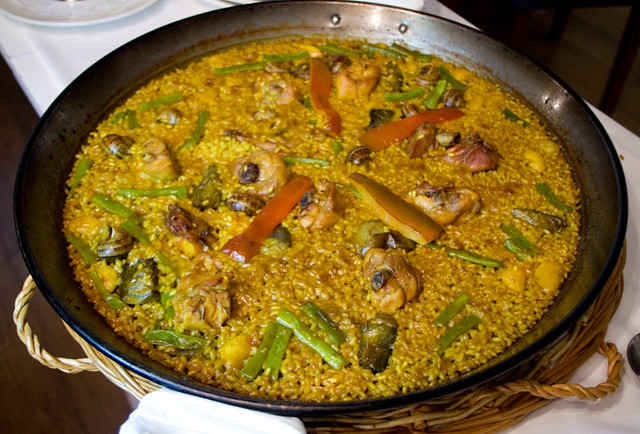 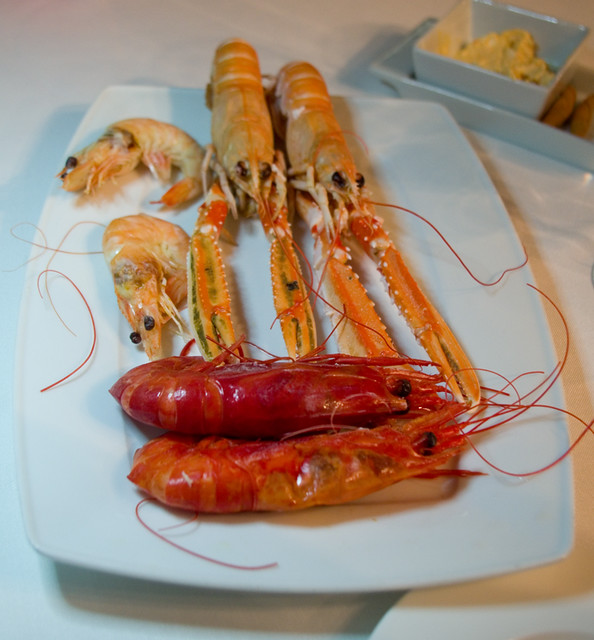 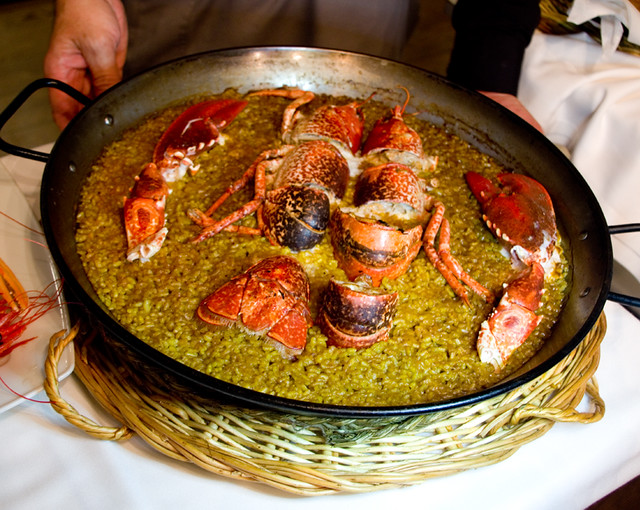