I’m taking a break today from ComicCon recap to post a recipe that a few people have asked for: my slow cooker clam chowder. I developed this recipe for two reasons: 1) I love dairy, but it doesn’t love me back, so if I want clam chowder I have to make it for myself with a dairy substitute, and 2) I had packages of frozen clams in my freezer that I’d bought on sale and I had no idea what I wanted to do with them. I Googled for ideas, and for the most part the consensus seemed to be that frozen clams are gross and tough, so don’t buy them in the first place. Well, in the past I’ve learned that simmering tough cuts of meat in liquid for a really long time can make just about anything palatable, and that technique works well with cheap frozen clams. As a bonus, all of the ingredients can be prepped the night before, and then most of them are thrown into the slow cooker as you get ready for work. This chowder really only needs attention in the last hour or so, and even then not much.

A note regarding dietary requirements: I make my clam chowder dairy-free using almond milk, and nobody can tell the difference. If you’re allergic to nuts, try soy milk or rice milk instead. If you prefer dairy, use 2% milk. Also, clam chowder can’t really be made vegetarian or vegan — all you’d be left with is potato soup (which can be good, but is no longer clam chowder). However, if you don’t eat pork, turkey bacon may be substituted, although it will change the flavour somewhat. 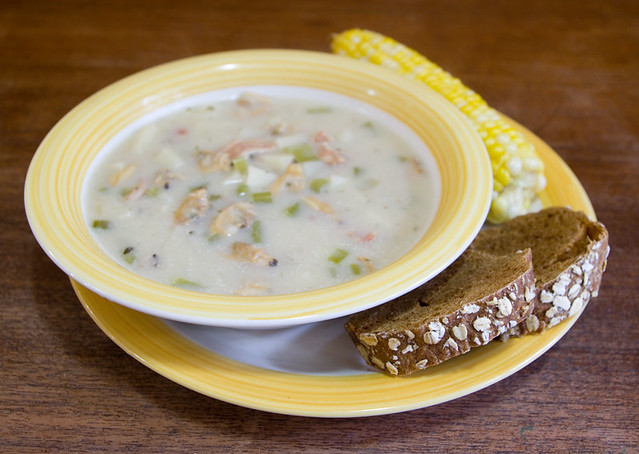 Thaw as per package directions:
– 2 packages of frozen clams (340g each)
In a frying pan, cook until crispy:
– 1 package reduced-salt bacon (375g package)
Place cooked bacon on a plate that is covered with a few pieces of paper towel; dab the bacon lightly to remove excess grease.
In the frying pan, reserve:
– 1 Tbsp bacon grease
Discard any additional bacon grease. In pan in which the bacon was cooked, in reserved grease, fry gently until soft and lightly browned:
– 2 yellow onions (approx 175g)
While onions are frying, chop into bite-sized pieces:
– bacon cooked in previous steps
– 2 cups celery (approx 225g)
Peel and chop into bite-sized pieces:
– 6 cups white-fleshed potatoes (approx 1100g)
Peel and mince:
– 1 clove garlic
When onions are done cooking, add them and all previous ingredients to slow cooker. In addition, add:
– 6 bottles clam juice (236mL each)
– 1 tsp salt
– 1 tsp fresh thyme*
– 1/2 tsp pepper
– 1 Tbsp dried parsley
Cook in slow cooker for 7hrs on high, until potatoes are tender**.
In a large measuring cup or mixing bowl, whisk together:
– 4 cups almond OR soy OR rice OR 2% milk
– 4 Tbsp corn starch
Stir in the milk and corn starch into the mixture in the slow cooker. Cook until it reaches the desired thickness, about 1 additional hour.
I serve this soup immediately and freeze the leftovers; it also refrigerates well. If you are planning on serving this at a gathering, it can be prepared in advance and reheated immediately prior to serving.

*1/2 tsp dried thyme may be substituted for fresh.
**If you have an older slow cooker, you may need to adjust cooking times, as older slow cookers (pre-1980 or so) do not get as hot. If you’ve cooked it for the required time and the potatoes still aren’t tender, the recipe may be finished on the stove, being careful not to boil or scald the liquid.