A coworker of a friend had a rhubarb plant that was trying to take over the world, so my friend was nice enough to claim the excess stalks for me and then meet up with me so I could get them. Since I knew I wasn’t going to have the chance to use up all of the rhubarb before it went bad, I washed it, chopped it, and divvied it up into portions for the freezer. However, I did set a bit of it aside so that I could make up another batch of rhubarb muffins (125 Best Quick Bread Recipes by Donna Washburn & Heather Butt (2002), page 22). 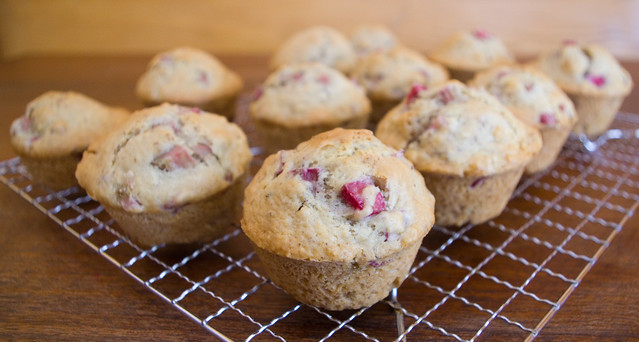 These muffins are a real hit around my house, and most of the batch of twelve was gone before the end of the day. I didn’t have any oranges or orange juice around the house (and I didn’t want to go out), so I omitted the orange zest and juice from the recipe. Instead I put 3 Tbsp lemon juice and 3 Tbsp sugar into a measuring cup, then added enough water to bring the level up to 2/3 cup. This gave me the proper amount of liquid, but with a bit of acidity and sweetness. The recipe is also for a loaf instead of muffins, but I just greased my muffin tin and filled the twelve sections with the batter, and baked it at the recommended temperature for about 25 minutes. Despite all of the changes, this recipe turned out really well! 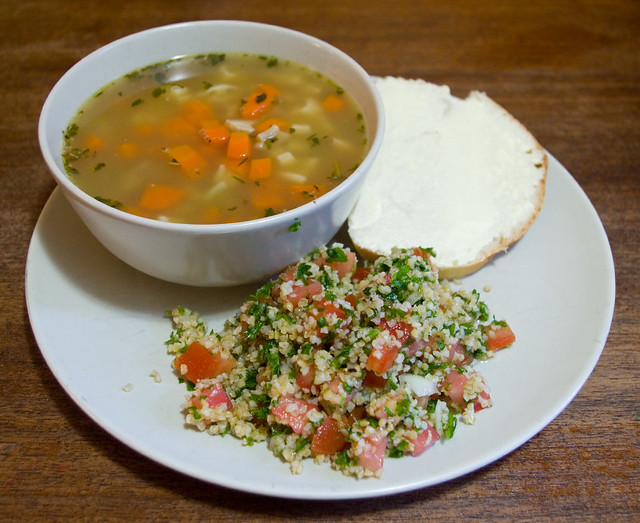 Then it was time to make dinner. Once again, I didn’t want to hit the grocery store, so it ended up being a “use up the food in the fridge” kind of day. I thawed some chicken broth that I had made previously, chopped up some leftover chicken and peeled some carrots, then brought that all together to become chicken noodle soup. I even had a chance to use up some of my excess Canadian Eh? Shapes Pasta. I served the soup alongside tabbouleh (the Joy of Cooking (2006 edition), page 362), which was made with parsley and mint from my garden. The bread was day-old improvised white bread which has a whole story of its own behind it, but that tale will have to be told another day. All in all, I was very satisfied with this clean-out-the-fridge meal!