A friend of mine sent me a link to the Gotta Have It Vegan Mac ‘N’ Cheese recipe from Tasty (video available here), since they know of my love for macaroni and cheese, but I’m currently forgoing dairy. I gave it a try the other day, and I have to say it was actually pretty good. As I’ve found with so many dairy-free or vegan versions of other recipes, it was a little bit off from what I’m used to, but this one was tasty enough that my kids asked for seconds, which is a pretty good recommendation in our house. 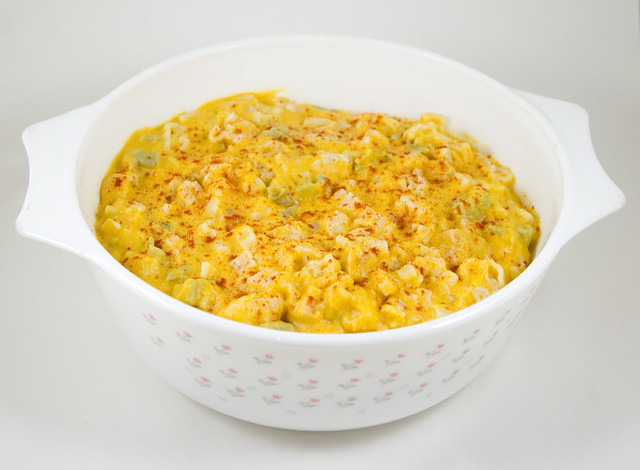 One thing that I found was that the “cheese” had a problematic texture. Even when I got it to the proper consistency, it thickened really quickly as soon as it started to cool. The vegetable puree was just starch on top of the starch of the noodles, with no fat or oil to smooth it out and make it flow. I think that the addition of an oil of some kind (olive or canola) would greatly improve the texture of the sauce. Additionally, this sauce could be used as the start of a number of different kinds of casseroles. I think adding cooked vegetables (for the vegans) or canned salmon/tuna would add some variety and flavour. 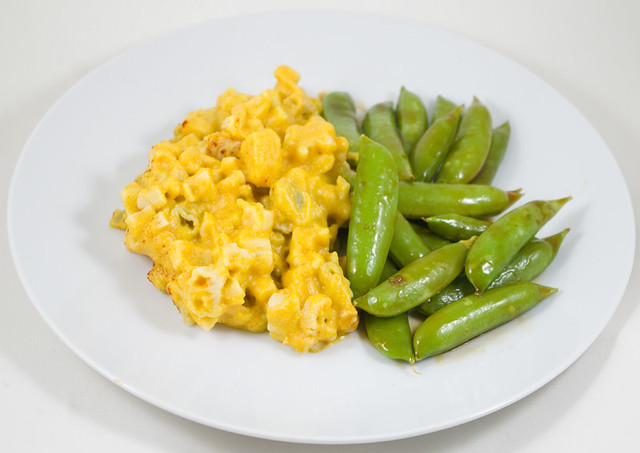 I think the reason I keep wanting to add things to this recipe is that the base flavour was incredibly bland. When I made this recipe for my family, I used the seasoning ideas in my mom’s homemade macaroni & cheese recipe and added 1/2 tsp Worcestershire sauce and 1/2 tsp table mustard. Also, I didn’t find that I needed an onion and onion powder; just the fresh onion would have sufficed. I think that the flavour of the sauce could have been boosted by using a clove of fresh garlic instead of garlic powder.

So would I make this recipe again? Most likely, but with all the modifications I’ve previously mentioned. I mean, there are a dozen changes and versions that have been made to my family’s mac ‘n’ cheese recipe, so don’t take it as a bad thing that I would do the same to someone else’s dish.

Now, what made this vegan mac ‘n’ cheese particularly Canadian? I used Canadian Eh? Shapes Pasta, which is available at Bulk Barn. The shapes are a bear, a maple leaf, and a moose. Sadly, the shapes were mostly obscured by the “cheese” sauce; I think these noodles would work better in soups if you want to see the shapes. However, they tasted just fine! I have extra that will probably make their way into my lunch for the Canada Day weekend. Oh, and they’re also all-vegetable, if you’re trying to keep your pasta dishes vegan.

Oh, and on a semi-related pre-Canada-Day note, I present you with the Arrogant Worms and their “anthem” called Canada’s Really Big. Enjoy!