The first day of school for the public school board in Ontario is always the day after Labour Day, which this year ends up being today. My girls are back to school, and although part of me is sighing in relief that they’ll be in someone else’s care for a couple of hours every day, I know the house will also seem echoingly empty without them around. I think I’ll learn to live with it, though. 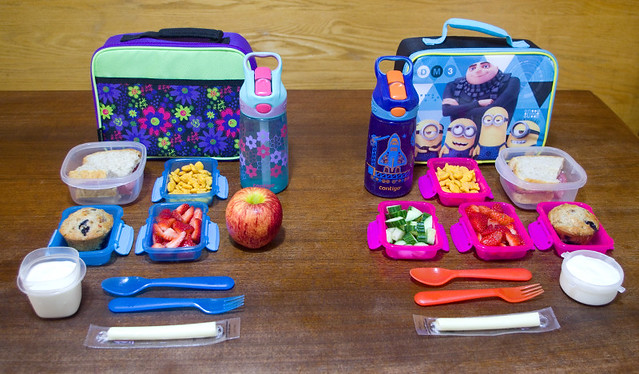 Thing 1 and Thing 2’s lunches for the first day of school.

School-provided lunches really aren’t a thing around here; heck, the school doesn’t even have a cafeteria. Everyone brown bags it, although some kids do get a special lunch delivered by the “Lunch Lady” once or twice a week, which has never really seemed like value for money to me. Most of the year my girls pack their own lunches the night before, and they have almost since they started to go to school. I tried to pack Thing 1’s lunches for her starting in Junior Kindergarten, but too often more than half of the food came back home – although her teachers reported that she was complaining of hunger. Once Thing 1 made her own lunch, a lot less of the food came back home, and the complaints became rare. I had to help her out a lot at first, but by the time Thing 2 started school, she wanted to make her own lunch to be just like Thing 1. I’m not saying that it’s not a struggle sometimes. What should be a short and simple process can take ages when the kids do it themselves. Sometimes they are more interested in doing just about anything else and getting them to make their lunches can be a seemingly endless argument. But in the end, I think that the independence is important, and that it’s a good thing that my children learn basic food handling and prep early on. My husband and I are always nearby to make sure that they make healthy choices — and to ensure that they don’t accidentally bring anything with tree nuts or peanuts to school. 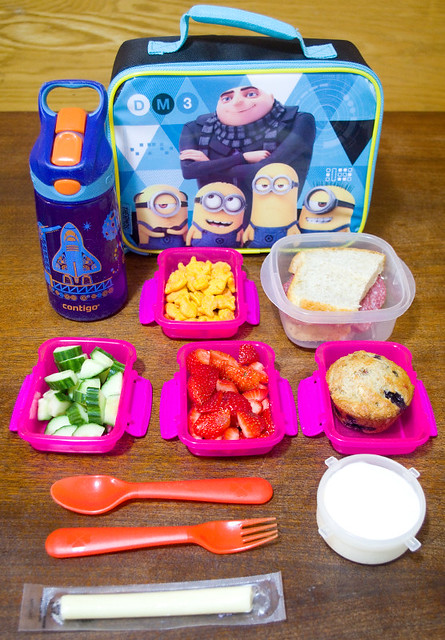 However, on the first day of school, for a special treat, I like to pack their lunches for them. I made up some fresh whole wheat bread using the Nan’s Pan Rolls recipe, and I also threw together some Blueberry Bran Muffins. The bread I used to make Hungarian salami sandwiches with mayonnaise (even though I prefer mustard myself). Each girl also got Goldfish, strawberries, vanilla yogurt, and string cheese. I packed Thing 2 a container of sliced English cucumber, while Thing 1 prefers an apple.

Am I the only one who finds those “school lunches in other countries” videos and articles interesting? I don’t know if you could consider this to be a typical Canadian lunch, though. I remember being very interested in my classmates’ lunches when I went to school because they were all so different. Some of them contained Wonder Bread sandwiches with peanut butter and jam or bologna and mayonnaise; others ate crusty French bread, sharp cheese, and cherry tomatoes; others always contained a thermos of soup and a travel package of crackers; others had warm dishes of rice and curry and spice. Some kids ate the same thing religiously, others had an entirely different daily menu. I think our household was somewhat between those extremes, with recurring favourites alongside seasonal and leftover dinner fare. 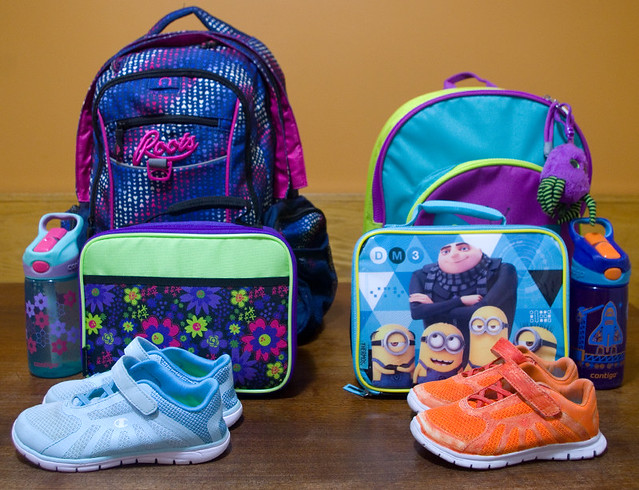 At any rate, my kids’ lunches and supplies were ready the night before. New-ish outdoor shoes were set by the front door, brand new sneakers were in their backpacks, packages of markers and pencil crayons and duotangs and paper filled up the rest of their bags. Their lunches and water bottles were in the fridge, waiting to be grabbed on the way to the door. Hopefully all of this preparation will set a positive tone for the rest of the year. Will they like their new teachers? Will they get along with their classmates? Will they enjoy the new challenges that their schooling puts in front of them? Who knows? There’s really nothing I can do to influence most of that. But lunch, though, lunch I can do. And no matter how the first day turns out, it always goes better on a full stomach.