Keeping with this week’s rather unintentional theme of preparing dishes from old cookbooks, last night I tried a dish from 100 Tempting Fish Recipes. This book (well, at 56 pages, it’s more of a pamphlet) was issued by the Department of Fisheries (Ottawa, Canada) in 1939, although I have a 1949 reprint. It’s well out of print now and I haven’t found any copies for sale on the Web, but a digital copy is available online at Early Canadiana Online if you have a membership (which I do not). The site does have a free 18-page preview. 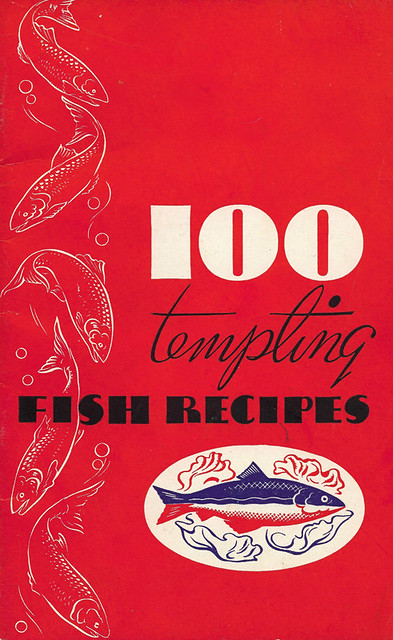 You can get a general idea of the age of this book just by the typography. Another dead giveaway of its age are the sometimes-vague cooking directions. For example, the recipe that I used was the Salmon Puff on page 23, and the baking directions were “Place in a buttered casserole, dot with butter and bake in a moderate oven until brown.” The term “moderate oven” is used a lot in this book and could, I think, denote a number of temperature settings. The timing is also vague; these days, you’d get an instruction along the lines of “Bake in an oven preheated to 350° until brown, about 20 to 30 minutes.” Not that older recipes can’t be precise, but newer ones generally give much more detail. I think that part of this is because the authors expected the reader to have a background of knowledge that would make what the author meant obvious. It’s probably also due to the fact that publication costs went down over time, so it was possible to be wordier (and include photographs of the final product) when every word didn’t carry as much financial weight at printing time. Heck, even between in my 1949 copy 100 Tempting Fish Recipes and the 1960 The I Hate To Cook Book by Peg Bracken (which is still in print), there’s a notable shift toward more precise instructions. The author actually bemoans this in the introduction:

…[T]hey’re always telling you what any chucklehead would know. “Place dough in pan to rise and cover with a clean cloth,” they say. What did they think you’d cover it with?

This terrible explicitness also leads them to say, “Pour mixture into 2 1/2 qt. saucepan.” Well, when you hate to cook, you’ve no idea what size your saucepans are, except big, middle-sized, and little. Indeed, the less attention called to your cooking equipment the better. You buy the minimum, grudgingly, and you use it till it falls apart. 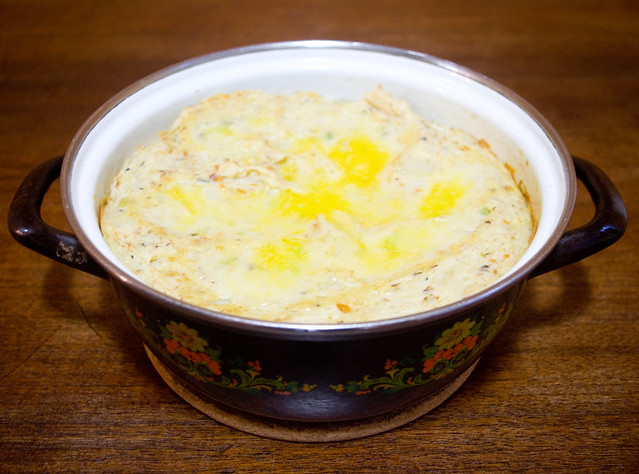 Back to yesterday’s recipe. It’s what I would consider to be a “pantry casserole”, i.e. a dinner that, with a reasonably-stocked Canadian pantry and fridge, one is likely to have all of the ingredients already at home. The salmon, which would normally be the ingredient most easily spoiled, is canned. You’d think that with a pound of salmon in there, the dish would at least have a bit of a pink tinge, but potatoes make up the bulk and leach it of all colour. I think that this is a good metaphor for the dish overall, actually. It’s just very… Beige. Not great, not bad; edible, but uninspired. Even a sprinkling of paprika as garnish would liven it up a little. Peg Bracken has great things to say about garnish on page 15 of The I Hate to Cook Book:

The reason for these little garnishes is that even though you hate to cook, you don’t always want this fact to show, as it so often does with a plateful of nude food. So you put light things on dark things (like Parmesan on spinach) and dark things on light things (like parsley on sole) and sprinkle paprika on practically everything within reach. Sometimes you end up with a dinner in which everything seems to be sprinkled with something, which gives a certain earnest look to the whole performance, but it still shows you’re trying. 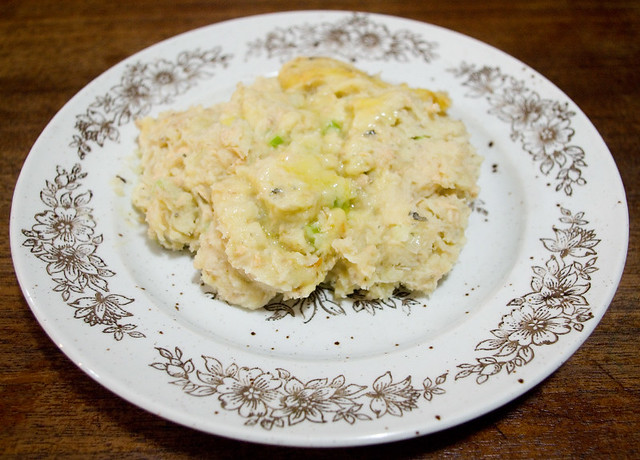 The salmon puff would have benefited greatly from a side of steamed vegetables or a salad, both to enhance the presentation and the nutritional values. Surprisingly, I think I may use this recipe again in the future specifically because it is an easy pantry casserole. Heaven knows some winter days I just don’t want to brave the roads for more exciting ingredients. Also, it would be a great way to use up leftover mashed potatoes. I mean, everyone in my family ate their dinner, nobody complained, and some even had seconds. Nobody had anything great to say about the dish, but when it comes to feeding kids, a lack of complaints is pretty high praise.