In an attempt to use up the zucchini I received this weekend, I made another round of Baked Panko Zucchini Sticks for dinner last night. Enough for my entire family only uses up about a quarter of one of those giant summer squash. Of all of the recipes that I have for zucchini, this one uses the most in one go. It may end up being a contest to see which gives out first, my supply of zucchini or my kids’ ability to consume it. To be fair, the girls were really happy to see the zucchini on their plates last night, and that’s two suppers in a row where I didn’t have to fight with them to get them to eat their vegetables. 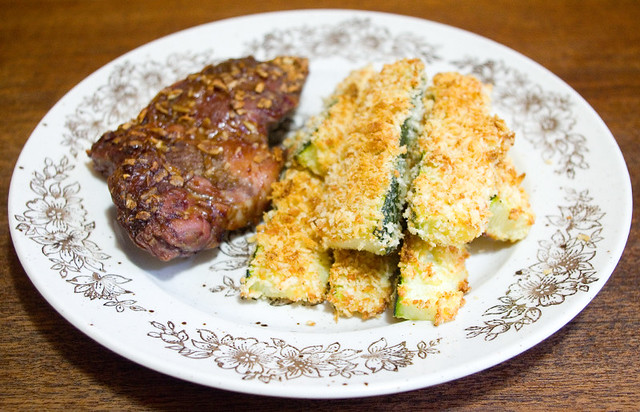 However, the real star of dinner wasn’t the zucchini sticks, although my kids may argue otherwise. The best part to me was the pork chops that I baked as the entree. I found these 1″ thick slabs of pork on sale for less than the cheap cuts, so I stocked up and planned on a few for dinner. I greased a broiler pan, lay the chops flat on top, and then covered them with a thick coating of dry onion soup mix. Then I baked them at 275°F (135°C) for about two hours. They were a very fatty cut, but the low, slow bake made them moist, tender, and not too greasy. Honestly, they couldn’t have been much easier. Now, if only I’d planned a meal cooked entirely in the oven for a day that wasn’t 30°C (86°F).

I was inspired to cook the meat this way after reading The I Hate To Cook Book (Peg Bracken, 1960). On page 12, the author writes about Sweep Steak, which is “[s]o-called because a couple of seasons ago this recipe swept the country“. Basically, it’s beef coated with dry onion soup mix and roasted in the oven.

Now, this cookbook predates me, but I distinctly remember dry onion soup mix being a staple of the kitchen when I was growing up. It was used to coat steak, to bread pork chops and chicken, and to season meatloaf. In our house, it was most commonly mixed with sour cream to become chip dip — which is referred to as Classic California Dip on page 84 of The I Hate To Cook Book, so I guess this combination predates me as well. I remember doing groceries with my parents and there was a whole assortment of dried soups along an aisle. But when I went to pick up some mix for this dish, the dried soups took up only part of one tiny shelf, most of which was taken up by Cup-A-Soup. There are probably a hundred or more types of canned and tetra-packed soup, not to mention the refrigerated stuff in the deli section, but apparently the dried kind is no longer popular. I guess that’s to be expected with the popularity of fresh ingredients being back on the rise. I certainly hadn’t bought any dried soup mix in years. Still, it came as quite a surprise to me to see the selection so limited.