Yesterday ended up being hot and humid, so I wanted to make a dinner that didn’t require heating up the kitchen all that much. Community Table’s recipe for Slow Cooker Chicken Tikka Masala had come across my feed recently, so I thought I’d give it a try. How does cooking something for eight hours not heat up my house? Well, I put the slow cooker out on a table in the garage. 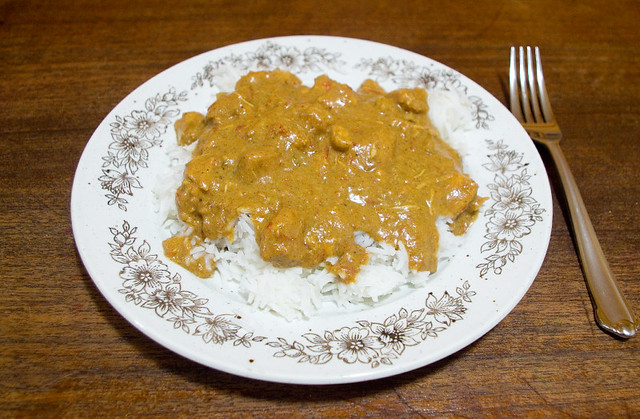 I wish I owned the pretty dishes that they use to serve it in the video.

I had high hopes for this recipe, because a) true to my heritage, I like making easy food where you just put everything in a pot and we boil it for seventeen and a half hours straight, as Denis Leary put it; and b) this dish smelled absolutely fabulous while it was cooking. My garage has never smelled better, to be honest, and sometimes I use my bread maker in there. But when I actually took a bit, the flavour just didn’t live up to the hype. It was just… Bland. There was no depth.

Now, I’m no expert when it comes to Indian cuisine, but if I ever try this recipe again I would change a few things. Instead of just throwing everything in the pot raw, I would first toast the spices, then brown the onions and the garlic in a bit of olive oil, and then brown the chicken. This would pre-cook some of the ingredients, so it probably wouldn’t be necessary to have it in the slow cooker for as long, maybe 4 hours. Instead of chicken breasts, which have a tendency to be dry (even in sauce), I’d use chicken thighs. I’d use fresh tomatoes run through a blender instead of canned tomato sauce for a fresher taste. I’d add a few more veggies chopped up bite-sized; sweet peppers and mushrooms go well in this kind of dish (cooked first on the stove as well in bit of olive oil), but I could probably throw in anything on hand. It’s not like I’m going for authenticity here.

If nothing else, this recipe is in desperate need of salt, which enhances flavour. I added salt after I served the dish and it really did help, but I think it would be so much better if it was done during the cooking process. However, I’m not sure exactly how much salt is required for the whole potful (which feeds my family twice over, by the way). Salting to taste unsafe to do when the chicken is raw, so I’d really have no choice but to pre-cook the chicken anyway, and if I’m doing that I might as well make use of all of the previously mentioned techniques as well.