We celebrated my mother’s birthday this past Saturday. At her request, I hosted dinner at my house and made her up some of my ramen — which somehow she had never tried before. The version that I chose to make was Furikake Salmon Ramen (page 82 of Simply Ramen by Amy Kimoto-Kahn (2016)); the recipe is also available online here. This recipe uses a shoyu base (page 8, or online at easypeasyjapanesey.com), which I made up in advance in my slow cooker. I remain rather enamored of this base recipe, but every time I make it I remind myself that sometime I really need to try the tonkotsu base, which is my favourite but appears much more difficult. I used soft-boiled eggs instead of marinated half-cooked eggs, mostly due to time constraints. I also used packaged noodles; one of these days I will make my own, but that really requires a pasta maker, which I don’t own. I didn’t use the kind from the instant soup packages, as I find they get soggy much too quickly, but instead a package of dried noodles on their own for which I unfortunately can’t read most of the label. 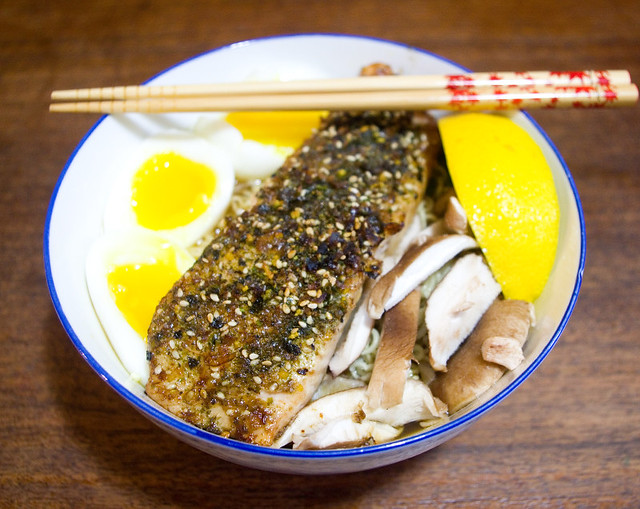 The real star of this dish is the salmon. I was lucky enough to find it on special at the grocery store, pre-portioned and ready to go. The furikake topping was delicious even though I used North American mayonnaise instead of Japanese-style. There were some leftovers and I really look forward to having them served over rice in the next few days. I think that this topping is going to become part of my regular dinner roster; it would probably be good on other pink, oily fish like sea trout. 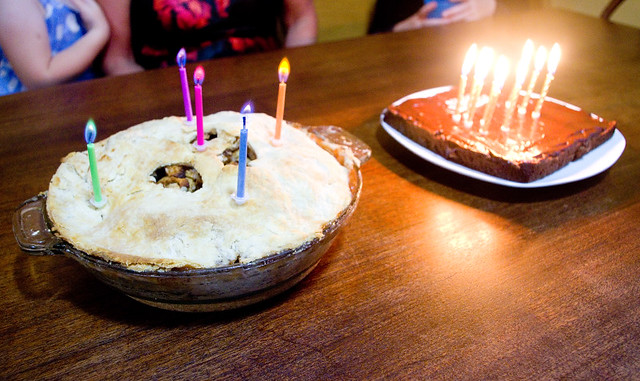 In our family, there’s always dessert with a birthday dinner, even if you’re stuffed from the meal itself — that just means that you take a breather and have the treat later in the evening. This year I made apple pie using fruit that I’d grown on my own tree in the back yard. For the chocolate lovers, Dad made brownies with chocolate icing, which were delicious and, if you know my dad, a very special treat, since he rarely bakes. We served it all up with whipped cream and/or vanilla ice cream (and dairy-free alternatives thereto). Oh, and candles! I was thrilled to find that it’s possible to get the candles that burn with coloured flame at the dollar store these days. I used to have to go downtown to a specialty store to buy them. 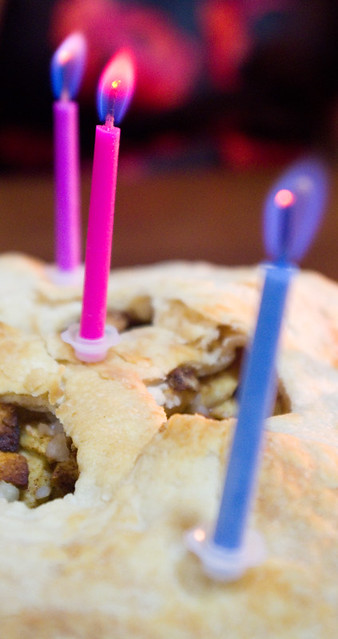 So happy birthday to my mom! Love always to the woman who helped shape me into the person that I am (whether that’s a good thing or not is a matter of opinion).