I absolutely love going thrifting, i.e. going to second-hand shops, antique stores, flea markets, and giveaways in search of treasure. I mean, it’s the kind of treasure that is other peoples’ trash, but that’s totally okay by me. Treasure is in the eye of the beholder, really. Also, this is treasure I can actually afford. 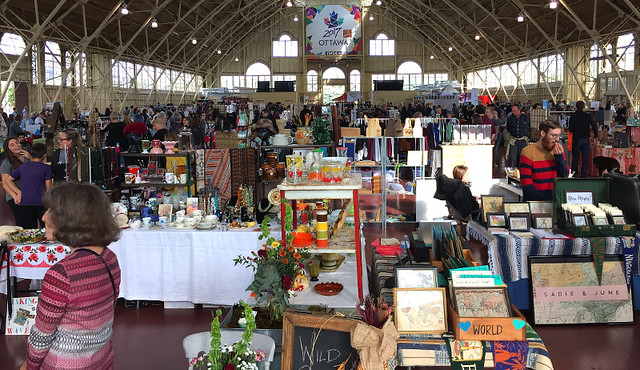 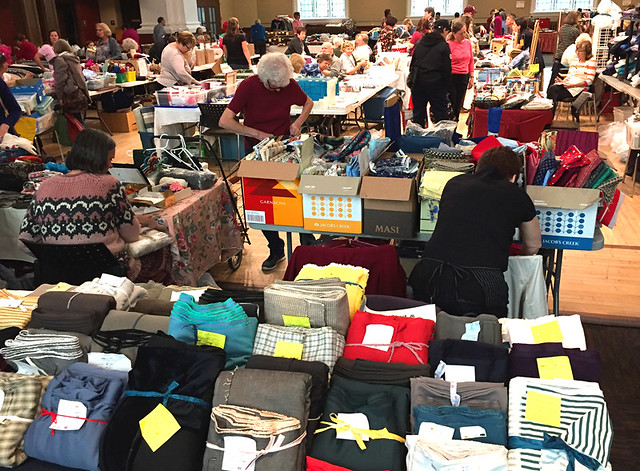 The Original Fabric Flea Market at the Glebe Community Center. 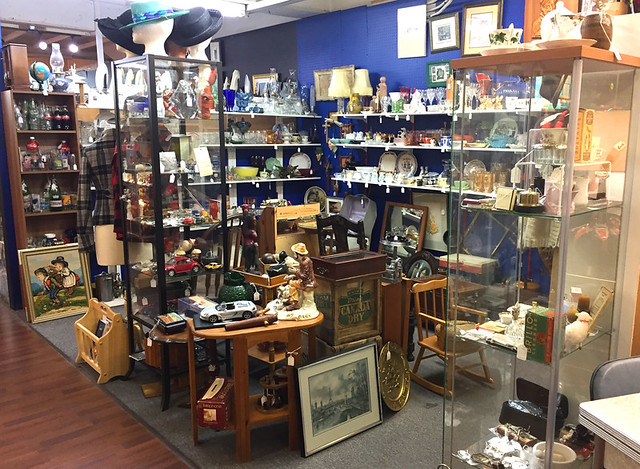 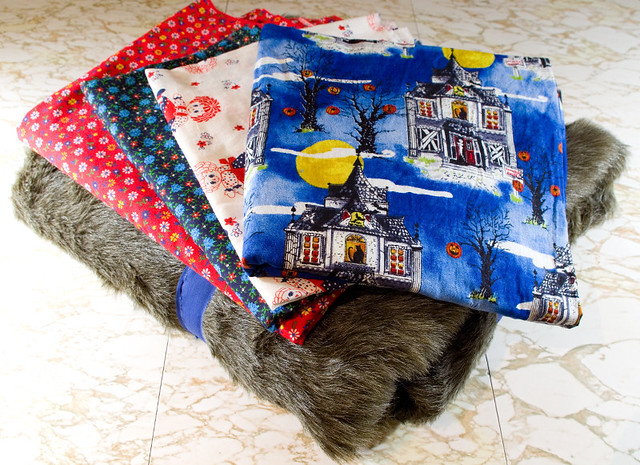 I did find some great treasures lately, like this stack of fabric from the Original Fabric Flea Market. I arrived with only an hour left of the market, and I really regret not showing up for the opening. I still scored some cute vintage prints, a bit of Halloween fabric, and a good chunk of grey faux fur (always in demand for costumes). 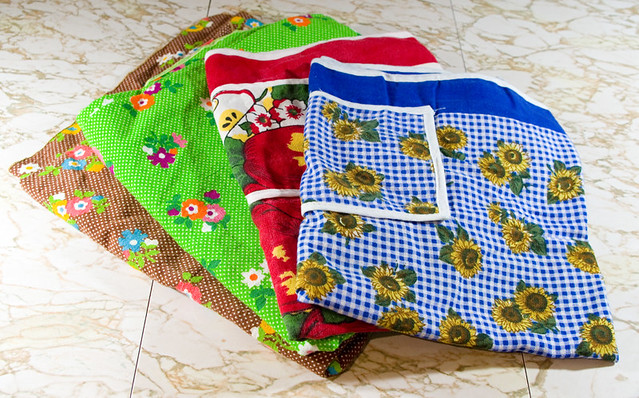 I also found two vintage tablecloths and two vintage-style (but brand new) aprons. The aprons are especially useful because I’ve found myself relying on them more and more to save my clothes when cooking — and they get dirty pretty fast, so it’s essential for me to have a small stash of them. 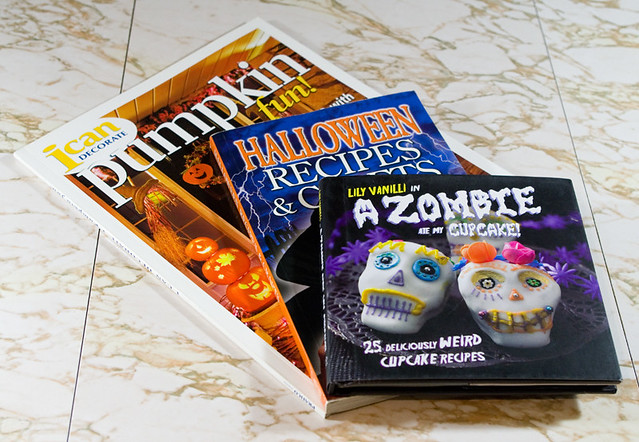 Recently there was a 50% off all books sale at Value Village, and the Salvation Army is currently running a coupon special that if you buy 3 or more books they’re all 50% off. (The coupon is valid until October 31st and is available here, for my fellow thrifters.) My girls are voracious readers, so I picked up dozens of new-to-them books that I will dole out over the coming months. For myself, I picked up the above-pictured Halloween books: 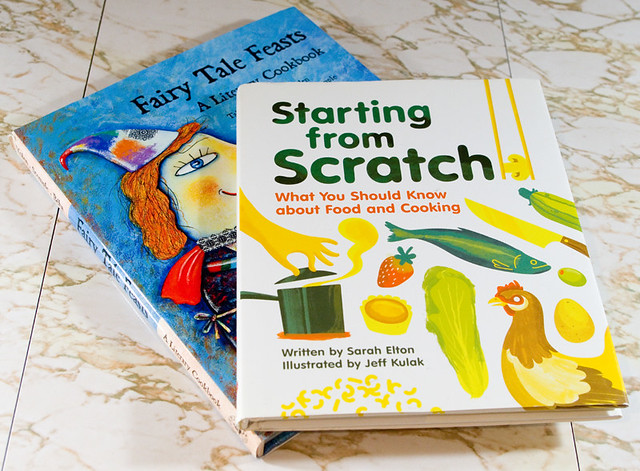 Books I’d like to go through with the kids:

– Fairy Tale Feasts: A Literary Cookbook for Young Readers & Eaters by Jane Yolen (2009)
– Starting from Scratch: What You Should Know about Food and Cooking by Sarah Elton (2014) 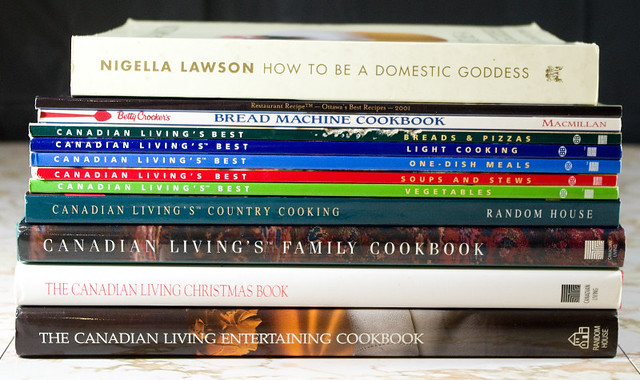 A bunch of cookbooks, which are disproportionately from Canadian Living because most of the other ones I was interested in that were available, I already had: 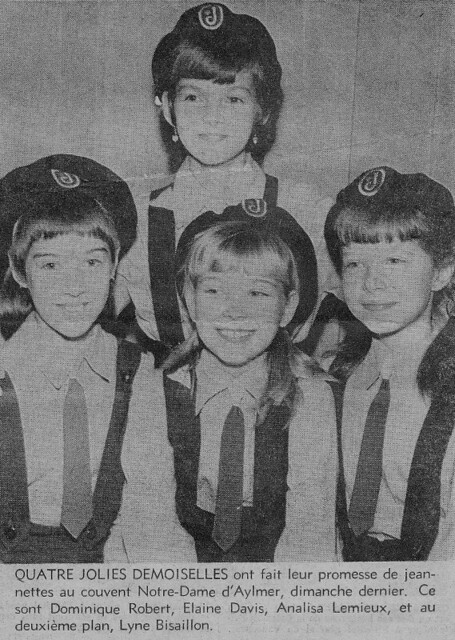 Tucked away in one of these cookbooks was a clipping from a newspaper, which reads (translated roughly from French):

FOUR HAPPY YOUNG LADIES made their Brownie promise at the Notre-Dame d’Aylmer convent last Sunday. They are Dominique Robert, Elaine Davis, Analisa Lemieux, and in the back, Lyne Bisaillon.

As an aside, if anyone in this photo wants the original copy or a high-res scan, I’d be happy to send it to them. 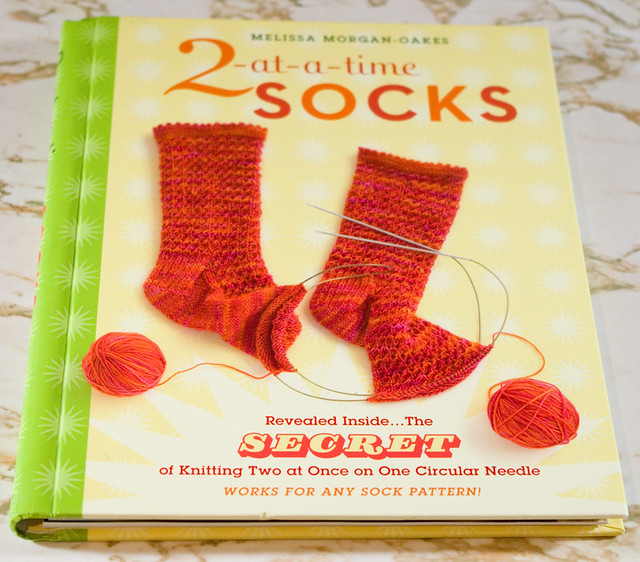 To satisfy my knitting curiosity, I snatched up:

I also thought that these old drop spindles were interesting. I’ve made a few attempts at spinning my own yarn in the past; perhaps it’s time to give it another go?

Some of my favourite finds of the last little while were two Pyrex England casserole dishes. The one on the left was originally my mother’s (although probably not the original lid) and it came to her as a wedding gift; the ones on the right I found last weekend. I believe that I mentioned in my Mom’s Homemade Macaroni & Cheese recipe write-up that this is, to me, the proper dish for my mother’s casseroles. Mom taking this dish out of the cupboard meant that I was about to have one of my all-time favourite meals. I still feel happy just looking at these dishes. It’s probably silly, but I bet everyone has a simple object with emotional connections to their childhood like this. 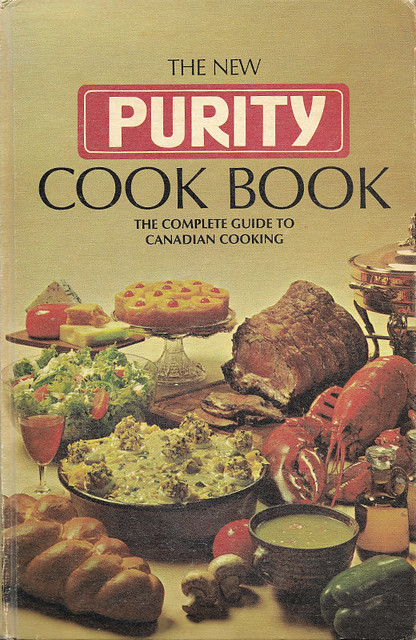 I’d have to say that my absolute favourite find was a copy of The New Purity Cook Book by Anna Lee (1967). This cookbook was a mainstay in my mother’s kitchen, which is why when I moved out I made sure to buy the reprint The All New Purity Cookbook. And you know, I probably would have been quite satisfied with that, except they made one crucial error to my mind: instead of organizing the index alphabetically like in the original, it was organized by category. This means that’s it’s impossible to quickly search for dishes with one main ingredient. It also leaves me trying to figure out which category some dishes fit into (it can be subjective). So it’s not just for nostalgia, but for practical reasons that I’m so happy I found a copy of the original book, and not only because they’re over $50 each on Amazon (I paid thrift store prices for mine). Not only that, but it’s in near-mint condition — much better than my mom’s well-loved copy!

There are a bunch of flea and Christmas markets coming up soon, which I’m looking forward to even though I’m not even ready to think about the holiday season yet. Heck, I haven’t even gotten through Halloween yet! What I’m looking forward to soonest is Ottawa Give Away Weekend, when people put items they don’t want on the side of the road for anyone to pick up for free if they are so inclined. I’ve found some lovely treasures on this weekend in previous years, including the beautiful antique mirror that hangs in my front hall. You might call it trash picking, but I call it recycling. Why should I buy all new things when there is such a huge variety of awesome second-hand items out there? Newer doesn’t always mean better — and it almost always means more expensive.