I really enjoy trying recipes that are not only new to me, but ones that are actually quite old. My collection of vintage cookbooks is slowly growing, one thrift store, garage sale, and used book sale at a time. But that’s not the only place that historic recipes can be found. YouTube is a great resource, and I love to have it playing in the background while I’m cooking, giving me ideas for my next meal. That’s how I came across the English Heritage channel, and How to Make Curry — The Victorian Way.

If you visit the actual video on YouTube, the written recipe can be found in the video description.

Now, of course this is English curry from the 1800’s, not authentic Indian dish at all. The ingredients are ones that were possibly to obtain locally or ones that were fairly easy to import; this was generally a dish served to the burgeoning middle class at the time, and the most expensive imports just didn’t make it that far down the social ladder. However, an English soldier or merchant who’d had a chance to try authentic Indian food — and liked it — would probably like something like this dish when they returned home. 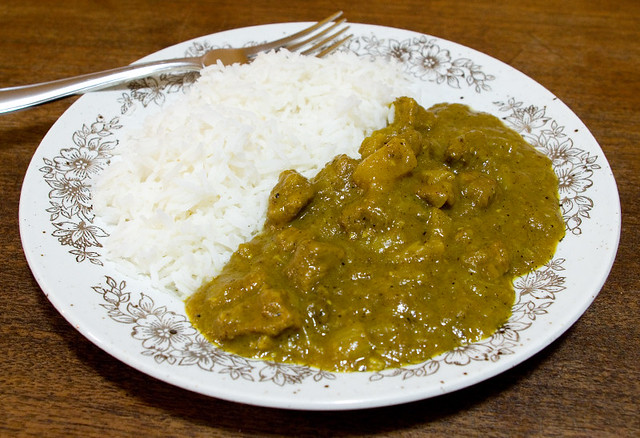 I tried making Victorian-style curry for dinner last night, and I’m happy to say that it went pretty well. The recipe breaks down the components of their curry powder, but not the quantities of each spice, so I had to make an educated guess. I put in:

This ended up being a pretty hot curry, at least to my kids’ tastes (my husband and I actually enjoyed the burn). I think next time I make it I might halve the amount of cayenne pepper, or even quarter it — which may lead to some difficulties in measurement because my scale isn’t sensitive enough to read weight under a gram. Perhaps I need another, more precise scale?

I was pleasantly surprised by the combination of ingredients in this recipe. As the video suggests, I included two chopped shallots and three diced cloves of garlic, since unlike Lord and Lady Braybrooke, I like both. I thought that the five (five!) onions would make it taste too much of onions, but it really didn’t. I couldn’t taste the cucumber at all, though I suspect that it played a part in thickening the sauce (and adding vegetables to a recipe rarely makes it less healthy). The apple was a nice, sweet touch. I did appreciate that this dish is dairy-free without having to make any changes. I’ve found that many curries, at least the ones made in North America and Europe, use cream or coconut milk to thicken the sauce. I have no idea whatsoever if this is also true of authentic Indian dishes, but I’ve never claimed to be an expert on such things. Not having to alter the dish in this respect was a nice change.

I’m hoping to make up some mince pies and gingerbread the Victorian way for the upcoming holiday season. I also have yet to try anything from my English 18th Century Cookery book, so that’s up there on my list. I’m also looking forward to trying a few of the recipes from my recently-acquired The Tudor Kitchens Cookery Book: Hampton Court Palace book, which I found at a local thrift store. This book has both original and modern interpretations of recipes originally from 1485 to 1603, so it should be a little bit easier to follow than those from 18th Century.