I’m at the tail end (hopefully) of recovering from my cold, and unfortunately my kids have caught it too. Well, they might have been the ones to bring it home in the first place, elementary school being the wretched hive of scum and villainy that it is. At any rate, I kept the kids home from school yesterday in an attempt to speed up their recovery. 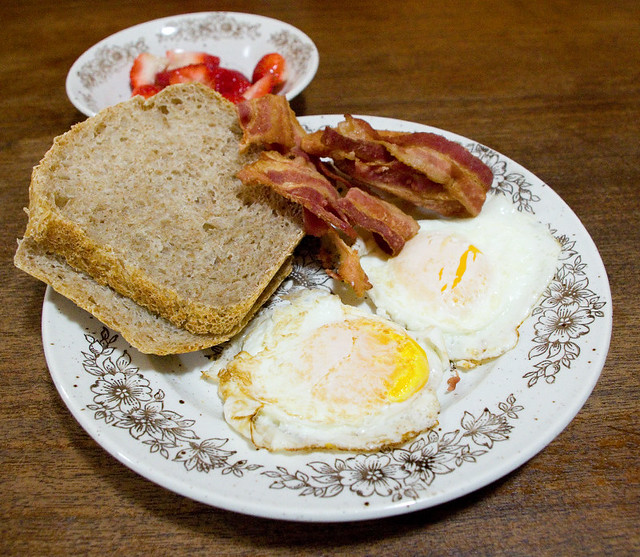 I gave the kids the option of homemade chicken noodle soup for dinner, since it’s a traditional kind of food to eat when you’re not feeling well. They vetoed this idea, and I was willing to be vetoed, as I hadn’t actually started cooking anything yet. At first they voted for instant mac-and-cheese, which I said no to. I can’t tell you how much it frustrates me that it doesn’t matter how many original and tasty meals I prepare, they’d live off of 99¢ dried pasta with powdered cheese sauce, given half the chance. Next they argued between themselves between bacon and eggs and trout with teriyaki sauce over rice. A quick trip to the grocery store brought the decision firmly down to bacon and eggs, since trout was not on special.

So our family dinner last night was eggs over easy, reduced-salt bacon, freshly baked Light Wholemeal Bread (Bread Machine: How to Prepare and Bake the Perfect Loaf (Jennie Shapter, 2002), page 69), and a side of sliced strawberries with a sprinkle of sugar. The girls were even up to hulling and slicing the strawberries. All in all, not a bad dinner for a house full of sickies!