Last night I was searching for something to make for dinner, something that wouldn’t require a special trip to the grocery store. I did finally go get groceries on Monday, so now both the freezer and the fridge are full and I figure that I shouldn’t have to go out again every day for ingredients. At my husband’s request, since he’s fighting off a cold, I decided to make soup. 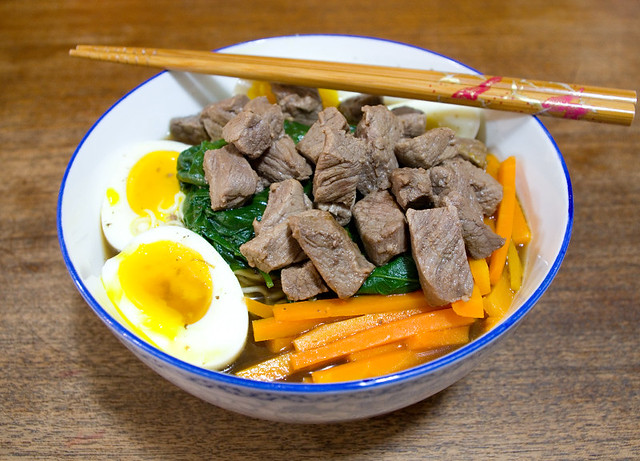 In the freezer I had some beef broth made with garlic and wild mushrooms, which I thawed as the base for the soup. I boiled up some ramen noodles and topped them with steamed spinach, carrot matchsticks, and soft-boiled eggs. The crowning glory of this particular dish was the steak. It didn’t brown up as nicely as I’d like, to my dismay, but it was very tender. To enhance the flavour, I used a marinade from page 65 of Simply Ramen by Amy Kimoto-Kahn (2016). Now, technically the recipe was for Kobe Beef Tsukemen, but I’ll be 100% honest and tell you that there’s no way I can afford Kobe beef. Instead, I thought I’d just use the marinade on a (much) cheaper steak. The marinade contains lemon juice, soy sauce, sake, and mirin (sweet rice wine), which combined is somewhat salty-sweet with an acidic punch to start breaking down the meat. Also, as per the recipe, I fried up the steak in melted beef suet instead of oil, which I think helped to enhance the flavour. Once I removed the meat from the pan, I added the juices to the soup broth to add extra punch. I was very satisfied with how it all turned out, especially since it made a lower-quality cut of beef quite palatable. Even if I never get the chance to cook Kobe beef, I think that I will definitely revisit this recipe in the future when I have all of the other ingredients on hand to try the dish in full.

One thought on “Steak Ramen”