I thought it looked like a good weeknight meal, so long as I started it as soon as the kids got home (it requires simmering on low heat for two hours). I ran it through Google Translate and used the recipe for, as it called it, “simmered boiled meat pasta”. I had to laugh at how bad bad Internet translations can be — among other things, this one instructed me to “add red wine to strengthen the fire, fry for 2-3 minutes and fly alcohol”. Granted, the whole reason I used the program is because my paltry Japanese skills aren’t up to translating a recipe, so who am I to judge? I managed to make a really delicious dinner anyway. 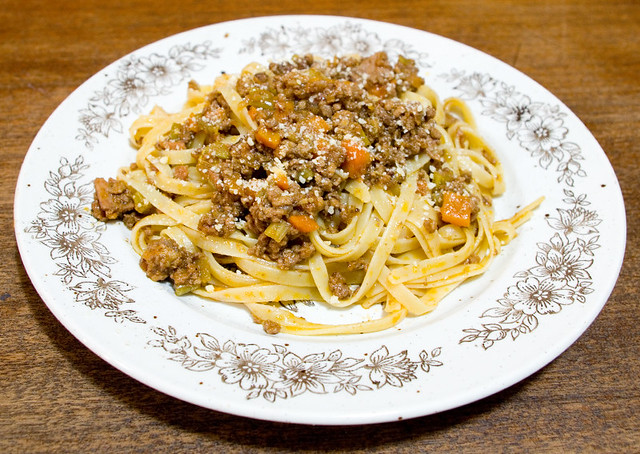 If you don’t have the patience Google Translate, check out the original recipe for Ragu Bolognese over on the English version of Tasty, which was posted back in May. Of course I found that version only after I’d made my dinner, but somehow I didn’t manage to mess it up. It has been pointed out online that this recipe is almost identical to Gennaro Contaldo’s Classic Italian Ragu Bolognese, and after watching both videos I have to agree. Although now that I’ve Googled “how to make a bolognese ragu”, all of the recipes are very similar, which stands to reason. I think it’s just because it’s a very classic, well-known dish. 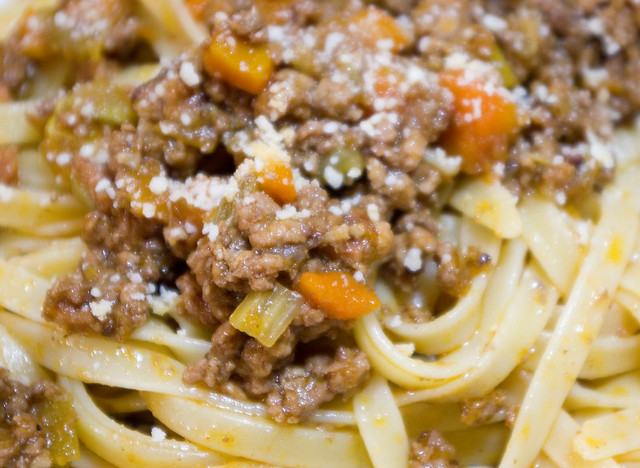 As usual, I had to make a few changes/adjustments to make it work with what I had on hand. My carrot ended up being about 225g, so I used that much celery as well, since some of my homegrown celery stalks were a bit spindly. I also used equal weights of bacon instead of pancetta, since I had bacon on hand and they are very similar anyway. I also used fettuccine instead of tagliatelle, since the grocery store I was shopping at didn’t have tagliatelle. All that being said, I do think that I will be making this recipe again in the future!