Over the weekend I hit one of the local bulk food stores, and while I was there my attention was drawn to what I thought were real Chicken Bones. Okay, not real chicken bones, but the candy named after them. Chicken Bones follow in the grand tradition of naming confections after the parts of animals that they superficially resemble, just like Beaver Tails and bear claws. At any rate, I thought I was getting the Ganong original chicken bone candy, but in retrospect I may have been getting an imitation.

Here’s a video by Ganong about how the real thing is made:

Real or fake, Chicken Bones were an essential flavour of my childhood holidays. Unlike the ubiquitous mint of candy canes, Chicken Bones are a strong cinnamon candy with a touch of dark chocolate at the center. Now, I wouldn’t have known to make this comparison as a kid, but as an adult I can definitely say that they remind me of Fireball whisky. 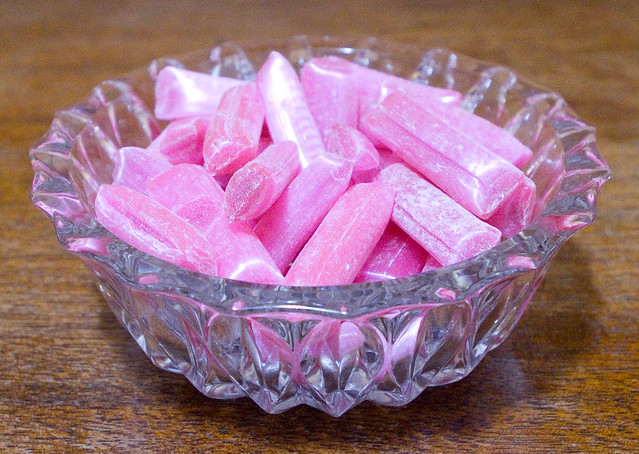 Chicken Bones are a really Maritime thing, although they’ve made their way to the rest of Canada somewhat sparsely over time. That isn’t to say that they’re universally loved out East; I know a fair number of people who can’t stand them, but they are definitely ubiquitous. My Nan, who was from Britain but lived almost sixty years of her life in small-town New Brunswick, used to buy Chicken Bones around the holidays, along with After Eights and liquorice allsorts. Chicken Bones have a flavour and smell that I most strongly associate with her. Now that she has passed away nobody else around here seems to serve them. So when I saw them at the bulk food store, even if they were imitations, I had to pick up a few. I do miss my Nan around Christmas, since I spent so many of these holidays in her company. But sometimes keeping the little traditions alive helps to bring her back just a little bit, which is especially important this time of year, I think.