I wrote last week about finally canning my Halloween pumpkins. So far I have done two of the four. For one of them I simply froze all of the pumpkin puree that I created by roasting the gourd and then running the flesh through a food processor. The other pumpkin I turned into pumpkin butter. 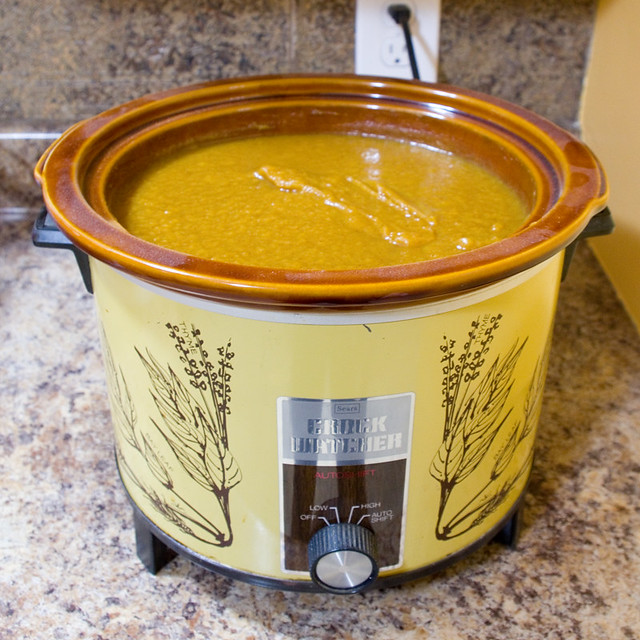 Way back when I started making preserves, I burned an entire batch of fruit butter by trying to cook it too quickly on the stove. Ever since then, I make my fruit butters in a slow cooker, for the most part. I don’t have a recipe as such, more of a technique. For the purpose of posterity, this time I measured everything out. I used a six-litre slow cooker, but I didn’t fill it to the brim because fruit butters tend to have big bubbles, so there needs to be some space under the lid. For this batch, I used:

Then I cook it with the lid a bit ajar so the steam can escape (some newfangled crock pots have a vent, but mine is probably older than me so it does not) for about 24 hours, or until the butter thickens. If it doesn’t reach the desired thickness in this amount of time, sometimes I will cook it a bit on the stove, since I find that leaving it longer than that in the crock pot can make it taste burnt. When it is ready, it will have changed from orange to a deep, nutty brown.

Now, I’d been making pumpkin butter for years using this recipe and then hot-water-bath canning it, and I never had any problems. I was using what I thought were USDA-approved recipes — and, indeed, they used to be! But the rules have changed over time, and now it’s no longer recommended to can pumpkin butter (or even pumpkin puree, which is less dense) at home. So once this pumpkin butter is complete, it’s going right in the freezer — which is the approved process. I use wide-mouthed mason jars to avoid cracking as much as possible, I don’t fill them all the way, and I make sure they’re totally cool before I freeze them. I still will lose a few every year to cracked glass. Of course, you can always buy plastic freezer jam containers and avoid cracked jars, but I like to give my preserves as gifts, and I find the glass jars to be much more attractive.

Now I’m a little bit paranoid about the whole thing, and I don’t want to make anyone sick, so I do pressure-can my pumpkin butter first. I process it for an hour (being careful not to let the canner boil dry), and when the cans come out of the cooker I can still feel butter boiling inside the jar. In addition to making the pumpkin butter safer, I find that pressure cooking it for this long also changes the texture. I wonder if this is because it is guaranteed to reach the jelling point (220°F to 222°F)?

(As an aside, the instructions for my pressure canner, which is only about four years old, specifically states that pumpkin puree can be pressure canned safely in this device.)

I have to admit that I find pressure canning more than a little terrifying. The steam hisses out at irregular intervals and constantly makes me think I’m going to end up with some disaster like this. In reality, that hissing means that the pressure is venting properly — what’s really a problem is if it stops (if you haven’t turned off the heat underneath first). That means that your steam vent has clogged and the pressure inside is building up disastrously. 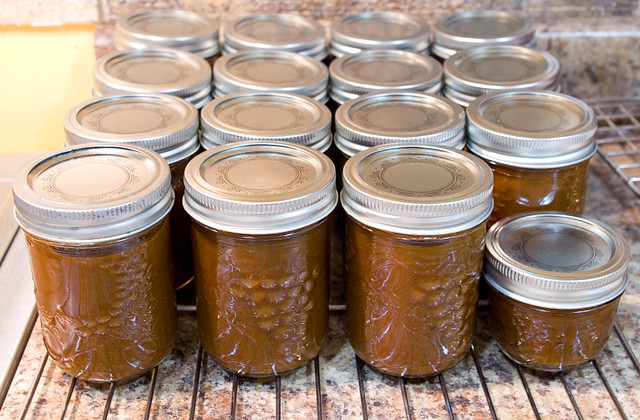 In the end, I ended up with fourteen 250mL jars and one 125mL jar of pumpkin butter. Now all they need are labels, and they’ll be ready for the freezer!