I did manage to finish Thing 2’s skirt last night, as well as doing a bit of Christmas shopping. That being said, Candy Cane reminded me today of another task that I really have to complete. 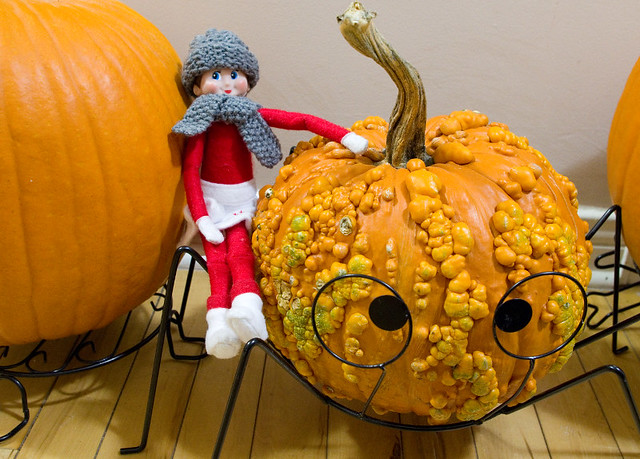 It says something about your ability to procrastinate when your Christmas elf can sit on your Halloween pumpkins. The squash are still in good shape because they haven’t been cut, and they have been set on holders off of the ground so that air flow underneath keeps them from rotting. They’re actually more likely to dry out than decompose at this point. I started by cooking the first of the first of my four pumpkins today. I used the same technique described on Elana’s Pantry, but the pumpkin was so large that each half took about an hour and a half to cook. Then I scooped out the roasted pumpkin flesh and blended it smooth it in the food processor. These pumpkins are going to yield a lot of pumpkin puree, but that’s fine by me! It freezes well, and I still have two cookbooks worth of pumpkin recipes to try.

Having all that pumpkin puree on hand meant that I really wanted to incorporate it into dinner. I went with my tried-and-true Pumpkin and Sage Pasta Sauce, which I have modified many times over the years to accommodate both food preferences and allergies/sensitivities. I’m very happy with the latest iteration, as is my family. The sauce tastes more of sage, garlic, and onion than it does of pumpkin (which itself has a rather mild flavour). Instead, the pumpkin is what creates the creamy texture without using any actual cream. These days I make a non-dairy version, but if you prefer it can be made with milk and topped off with a bit of sour cream. Also, if fresh pumpkin puree isn’t available, canned is perfectly fine. 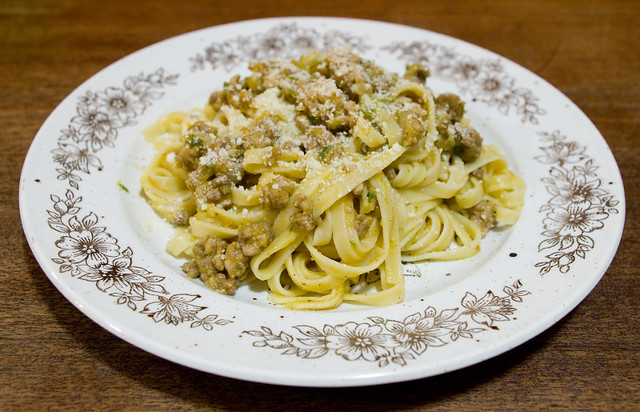 Into a deep saucepan or heavy-bottomed pot, pour:
– 2 Tbsp olive oil
Preheat the oil, then add:
– 1 medium white onion (100g peeled), diced
– 3 cloves of garlic, minced
On medium heat, sweat the onions and garlic in the olive oil, being careful not to let them brown.
Turn up the heat to medium-high and add:
– 200g ground pork
– 200g lean ground beef
Fry the meat until it is browned, breaking it up as it cooks so that there are no large lumps. Drain the excess fat/oil.
Add:
– 2 cups pumpkin puree
– 250mL chicken broth
– 60mL 2% milk, almond milk, or soy milk
– 1 tsp ground sage or 3 tsp fresh sage, chopped fine
– 1/4 tsp nutmeg
– 3 Tbsp fresh parley, minced
– 1 tsp salt
– 1/4 tsp black pepper
Stir together and simmer gently to reduce slightly for about 10min. While the sauce is simmering, cook as per package instructions:
– 400g fettuccine*
Drain the pasta, then return it to its cooking pot. ** Pour the sauce over the noodles and stir to mix. Serve, optionally sprinkled with:
– grated Parmesan or Romano cheese, to taste

*I’ve found that an equal amount of penne works as well.
**If you want to add sour cream to the sauce, stir it in at this point. You will need anywhere from 1/4 cup to 1/2 cup, depending on your personal taste. I recommending starting with 1/4 cup and seeing how you like it, then adding more if necessary.