Around the start of March, the weather begins to get warmer, but it’s still below freezing most nights and we’ll likely get a few more good snowfalls in. The weather has been quite mild recently, and is predicted to remain so for a while. We’ve managed to avoid Winter Storm Riley, which is hitting south and east of here. Canadian winters being what they are, we’d be prepared for the kind of snow that Europe is getting right now, but that weather system is much too far away. Instead, what we’re getting right now is the first hint of spring. 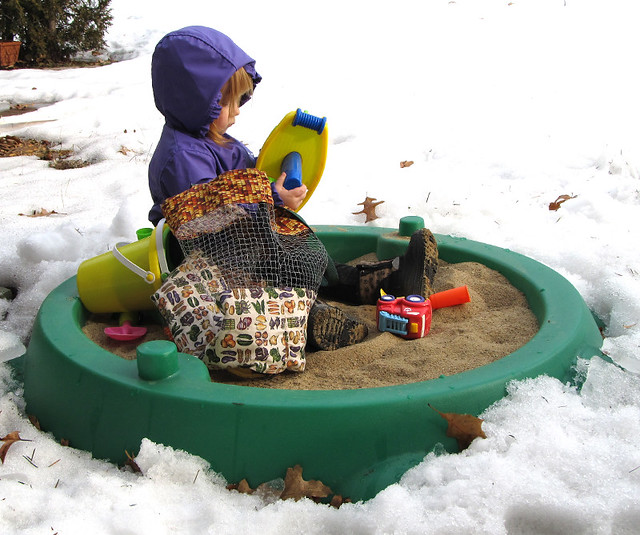 The photo above is a really old one of Thing 1 at the start of March, playing in the back yard while we cooked dinner on the barbecue. I love it because it shows the weird accommodations we have to make for the weather this time of year. (I also love it because I think Thing 1 is adorable, but I am somewhat biased.) It takes quite a while of above-zero temperatures for all of the snow to melt, and after that for the ground to thaw enough so that the water doesn’t just sit on the surface in a coating of mud and puddles. But it’s warm enough out that anything with good sun — or that sticks out of the snow covering — gets well dried out, and for the most part we get away with lighter clothing because it seems so much warmer than the frigid winter was. If you have kids in school, you send them in all bundled up for the morning temperatures (which are often below freezing), and they come home in the afternoon with 99% of their outerwear in hand or in their backpacks because it’s just much too warm. I’m pretty sure that this time of year is when the most stuff gets turned in to the school lost-and-found, to be honest. 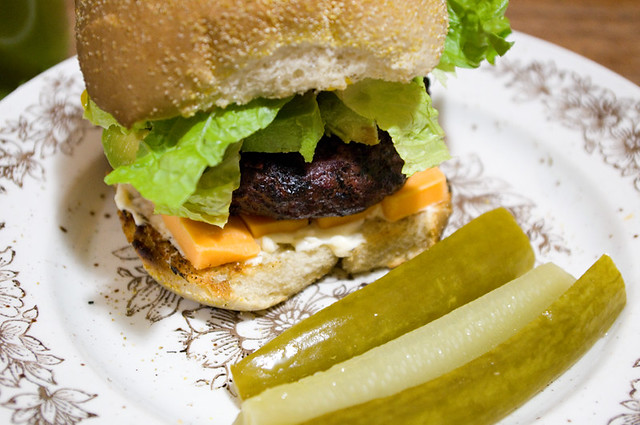 One of the perks of this time of year is that our barbecues can be started up again, since they stick out of the ground a fair way and aren’t in areas prone to drifts. Technically, they can be used year-round, but we would have to dig them out after every snowfall, and missing just a bit of ice means that the covers end up frozen to the ground until the next big thaw. Actually, the gas barbecue’s cover is still quite encased in ice, but the cover for the Black Olive (an insulated wood pellet grill) is shorter and hence could be freed sooner. This device was handed down to us at the end of last fall, so we never really got the chance to test it out. Yesterday, my husband fired it up for the first time this year and we had our first hamburgers of the season — a sure sign that spring will soon be here. I had my burger with lactose-free cheese, mayonnaise, mustard, avocado, and lettuce. And dill pickles, of course.

One thought on “First Barbecue of the Year”