I finally had a chance to try out one of the recipes from the 1877 The Home Cook Book that I was so happy to find on Saint Patrick’s Day! It was a very interesting exercise to try to recreate such an old recipe. Here’s the original text:

You’ll notice that it gives no cooking time or temperature, no approximate yield, no idea the volume of mashed potatoes, how big a cake of yeast measures (and what kind of yeast — the book gives multiple recipes for how to make your own), or how much flour to use. I’m really glad this wasn’t the first loaf of bread I’d ever made! Although I guess part of the point of these recipes is that they assume that all readers will have a certain breadth of knowledge base.

As it turns out, this recipe makes 4-5 loaves, depending on the size of your loaf pan. I honestly didn’t even have a bowl big enough to mix all of the ingredients, so I had to stir everything in shifts. It all turned out quite well, though, so I thought I’d share my interpretation of the recipe. Hopefully it’s a little more easily-repeatable than the original; I’ve also halved the quantities in my version for ease of cooking in a modern kitchen. The end result is a white bread that is still a little heavier and more filling, due to the potatoes. It also stays moist much longer than a straight white loaf. 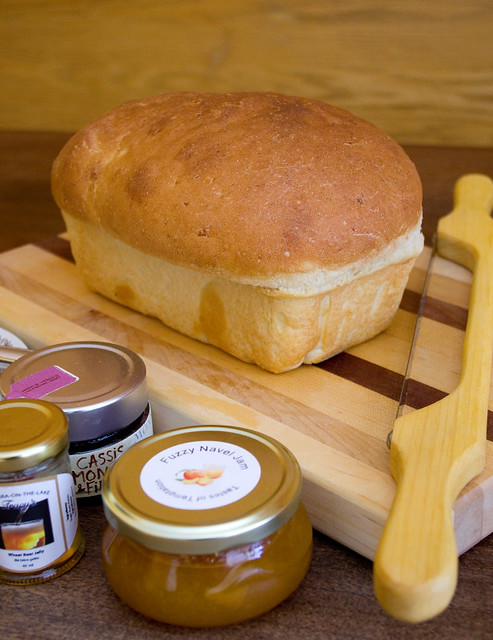 In a small bowl, mix together:
– 2 packages (14g) quick-rise instant yeast
– 1/4 cup warm water
Wait for yeast to activate; if it foams up, it is good to use.
While waiting for yeast, peel and chop:
– 2 potatoes
Peeled, this should yield about 265g of uncooked potato.
Place potatoes in a stove-safe pot, cover with water, and bring to a boil. Reduce heat to a simmer and cook until the potatoes are easily pierced with a fork. Alternately, you can cook the potatoes in a microwave-safe casserole: place potatoes in the dish, cover with water, and cook on high until they can be easily pierced by a fork, about 12 minutes. No matter how you prepare the potatoes, drain them once cooked and mash them until they are no longer lumpy. Set aside to cool somewhat.
In a very large bowl, combine:
– 4 cups warm milk
– 2 tsp salt
Stir. Add the yeast mixture and the potatoes to the mixture, stir well.
While stirring with a sturdy wooden spoon, gradually add:
– 8 cups flour
As the end of adding the flour nears, the mixture may become too stiff to stir with a spoon. If it does, it can be stirred with floured hands in the bowl.

Flour a flat surface and hands generously. Turn the dough out of the bowl, scraping if necessary. Knead the bread for about 10 minutes, until it is springy. If the dough is too sticky on the hands or flat surface, add a bit more flour, but add it gradually and only add as much as absolutely necessary. The dough should be moist but not sticky.

Oil or use cooking spray on a large mixing bowl. Form the dough into a ball and place it in the bowl. Cover the bowl with a clean, damp tea towel. Place the bowl in a warm, dry area with no drafts. Allow the dough to rise until double, about 1 hour.

Grease two loaf pans. If you use smaller loaf pans (8.5″x4.5″), they will end up with a “mushroom top” loaf like the one pictured. If you use larger 9.5″x5.5″ pans, the bread will be a more uniform shape.
Divide the dough into two even portions, form each into a loaf shape and put each one into its own loaf pan. Cover with a damp towel and allow to rise again in a warm, draft-free area until double, about one hour.

Near the end of the rising time, preheat your oven to 350°F (175°F). Bake for about 30 minutes, checking often near the end of that time to make sure that they do not overcook. Verify that the bread is done by removing them from the pan and tapping them on the bottom. When cooked through, the loaf should make a hollow sound. Remove the loaves from the pans immediately and place them on a wire cooling rack.

As with all bread, this kind is best served immediately. To keep it at its freshest, slice it only when it is about to be eaten. This bread will keep for four or five days if wrapped in a clean plastic bag. Make sure it is wrapped up only after totally cool, or it will go soggy.