After complaining in my last entry that I felt like I wouldn’t have time to cook properly until all of my ComicCon costumes are complete, I took a look at the shelf of dusty appliances in the basement and vowed to let them do most of the work for me for the next month or so. I figure that my three crock pots will be getting the most use. (The bread machine never really gets put away because we use it so much anyway.) I’m starting to wish that an Instant Pot was one of the tools that I had at my disposal, but that’s a purchase that will have to wait. 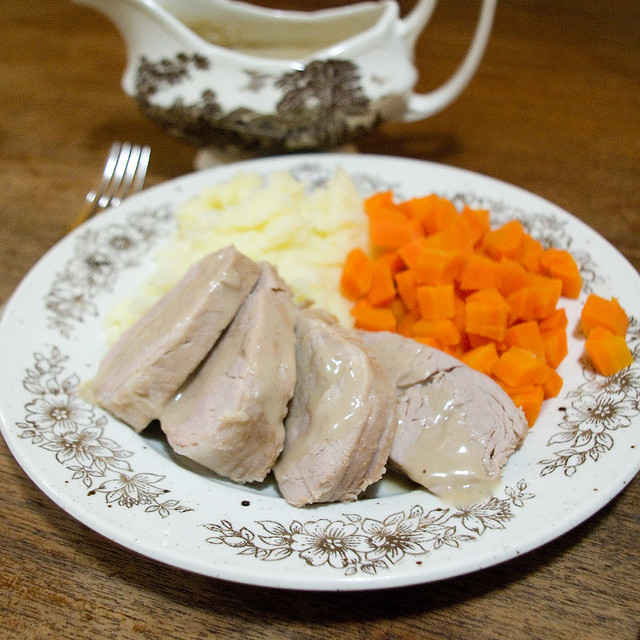 My friends and family have been sending me their favourite slow cooker recipes to help me along. In my experience, the ones sent to me by the friends who aren’t fond of cooking are the ones that I’ll find take the least effort and are the most foolproof. My mother (not a cooking fan) sent me the link to a Crock Pot Pork Loin with Gravy Recipe from Recipes That Crock. It’s as simple as throwing a few ingredients in a slow cooker and leaving it for about five hours. I actually had my husband do this part, and unfortunately he chose to use my 1970’s crock pot, which runs at a much lower temperature, so the dish took a good hour and a half longer than expected. (For food safety reasons, under-cooked pork is a really bad idea.) Also, he put in too much water, so I had to thicken the gravy afterwards on the stove by boiling it down and adding a little flour. That’s also why the gravy has such a light colour. That being said, this was still a delicious meal, even with the mistakes. Basically, it’s pork chops with mushroom gravy, but with a whole lot less effort. Works for me!