Victoria Day long weekend (more commonly known as May Two-Four) is this coming weekend, which is usually the time when most people in this neck of the woods start plating their garden for summer. Mine isn’t quite ready to be planted yet. The one along the fence line needs cleaning out, added soil, and sheep manure fertilizer; the one near the house may be partially dug up so as to do some work on the foundation. Even if that wasn’t the case, I’ll be at Russell Flea all day Saturday and I’m hoping to hit the Rockland Community Garage Sale on Monday. (Yes, Monday — apparently they hold it on the holiday Monday every year.) So I wouldn’t have much time to garden this weekend in any case. I’ll try to get as much possible done next week instead. 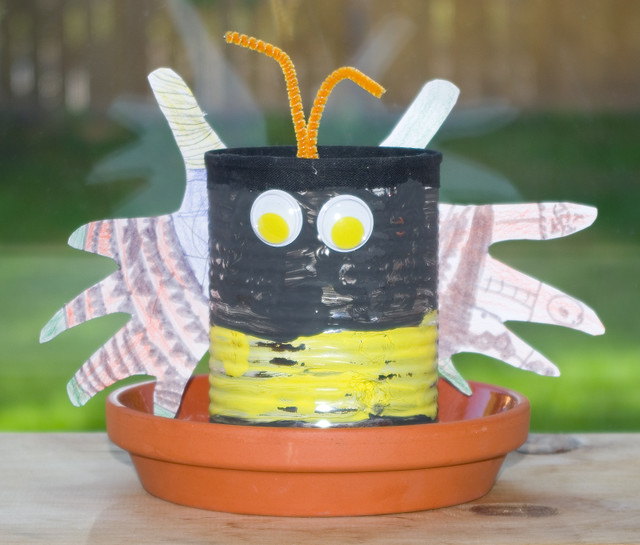 Since I wasn’t sure how much of my garden I was going to be able to plant this year, I didn’t bother starting plants indoors for a change. Once I know how many I’ll need, I’ll just buy seedlings from a local nursery. However, I do have a few items sunning themselves on my window shelves. One of the gifts that I got from Thing 2 for Mother’s Day this year was a cute little bee plant pot made from a recycled aluminum can. When I received it, it was filled with soil and, I was assured, a few seeds. 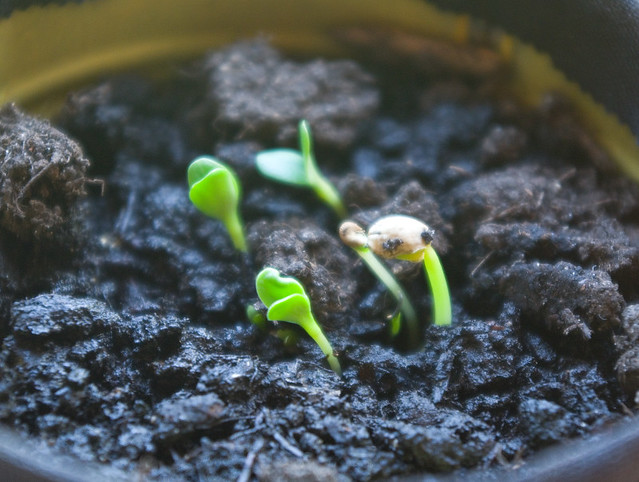 And the seeds have sprouted! I am probably way too excited about this, but plant gifts from children often aren’t in the best shape by the time they arrive home, so their survival was not assured. I have no idea what kind of plant this will end up being, so I don’t know how much to water it or if it’s a sun or shade plant, so… Fingers crossed?

(And yes, I know that my photo is kind of hazy, like a femme fatale in an old film noir movie. I’m not sure if the lens/mirrors need cleaning or if there is something wrong with my camera/lens since I kind of dropped it on Saturday at the con. I have to give it a good once-over; I’m really hoping it’s just dirty!)