When I was a kid, my mother liked to tell me the story of how she and my father met some of their friends back in the day. You see, Mom and Dad didn’t go to university directly after finishing high school; Dad earned a college diploma first, and Mom worked for a while. This meant that they were a few years older (and hopefully more mature) than most of their classmates. Not only that, but they had gotten married before they started university as well, which was (and I think still is) extremely unusual. This combination of factors meant that they didn’t really fit in with a lot of their peers. However, there was an extremely small community of international students attending the university at the time, and a lot of them were also older, and few were even married couples. My parents naturally fell in with this group of students and they became great friends. This meant that my parents (who are both white and from not only small towns, but military small towns) learned a lot about a number of international cultures and foods when otherwise they probably wouldn’t have done so. 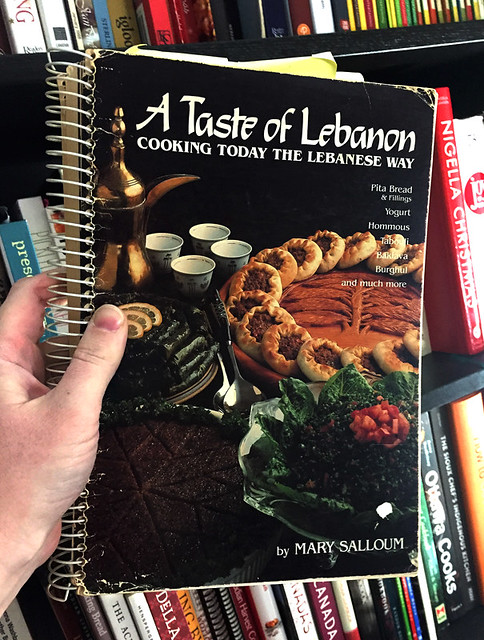 A number of their friends were from Lebanon, and one of them (or possible a few of them, I may be misremembering) wanted to help publish a Lebanese cookbook to be sold in Canada. It was to include a lot of dishes that were common knowledge in Lebanon, but were considered “unusual” and “exotic” at the time throughout most of Canada. My parents got to be the testers for a lot of these dishes, since the authors were trying to tailor the recipes to a wider audience. Always enthusiastic about trying new foods, my parents were very happy guinea pigs.

Now, I think that A Taste of Lebanon: Cooking Today the Lebanese Way (Mary Salloum, 1983) is the book that this eventually became. My father bought my mother a copy for Christmas the year it first came out. My parents used that book regularly until it was passed down to me a few years ago when I started to show a greater interest in cooking. 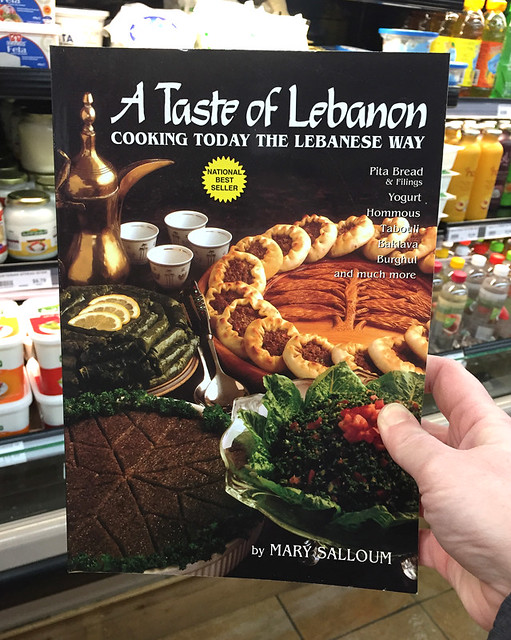 Imagine my surprise, then, to stumble upon a brand new copy of this book at the Mid-East Food Centre; I didn’t realize that it was still in print! Not bad, considering it’s been more than 35 years. A quick search online revealed that it’s also available online as well. I would definitely highly recommend getting a copy of this book if you’re interested in Lebanese cooking even a little bit. As a bonus, it is a Canadian publication, so it focuses on ingredients that are actually available here. 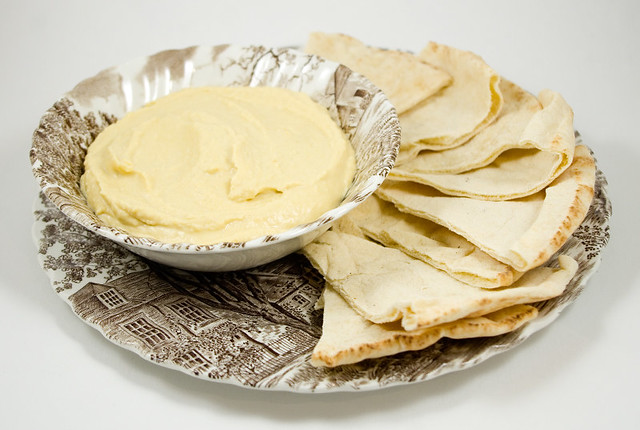 Finding this book still for sale prompted me to go back to my own copy and make one of the easiest of the recipes therein: hommous bi tahini, i.e. chick pea dip with sesame seed paste. You can buy a large variety of types of hummus in just about every chain grocery store these days, since it’s considered healthy and trendy now. But when I was a kid my parents had to make it for us. Actually, since it’s a no-cook recipe (all you need is a blender), it makes a lot of sense to make your own hummus if you can.

I based the prices here on the everyday listings found on the Superstore website; you could probably find a lot of these ingredients even cheaper if you shop the sales.

Now compare that to the pre-made prices, which start at $3.47 for a comparable amount, and go up to about $5.00 for the fancier stuff. That’s a pretty big saving if you make it yourself, and it’ll add up if you’re the kind of person who eats it regularly!

Now, my favourite way to eat hummus is on fresh pita bread — and one of the next recipes on my list is pita bread itself, which is also in this cookbook. But I know a lot of health-conscious people prefer it as a veggie dip, as it’s great with sliced sweet peppers, carrots, or celery. (Of course, it’s vegetarian, vegan, and gluten-free too — not that these dietary trends were even on the radar of this classic food.) A Taste of Lebanon recommends that hummus and pita be served with any fish recipe, baked kibbi, tabouli, barbequed chicken, or shish kabob. It is truly one of the most versatile dishes I have ever made.