My friends know that I’ve been looking for dairy alternatives lately because, as I have mentioned before, I love dairy, but it doesn’t love me back. One of my friends send me a link to the Vegan Cheese recipe and tutorial video by The Buddhist Chef. The video makes it look really simple, so I thought hey, why not give it a shot? 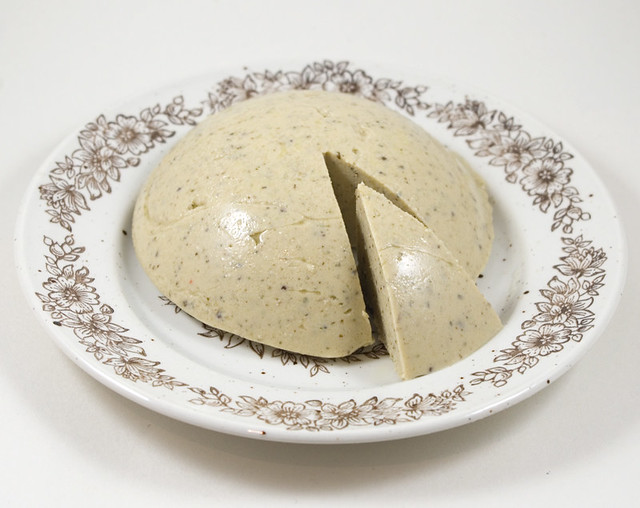 Vegan cheese molded in a bowl instead of a ramekin, hence the dome shape.

My first hurdle was sourcing the ingredients (although I had many of the basics at home). My local Bulk Barn carries roasted, unsalted cashews, and nutritional yeast. The agar agar powder, on the other hand, was difficult to find. Bulk barn didn’t carry it, and most of the health stores I tried normally carried it, but were experiencing supply issues. I finally found the powder at Kardish, at about $12 for 57g (smallest package size available), so about $21.05 per 100g. For comparison, 28g of Knox unflavoured gelatin (the animal product that agar powder is supposed to replace) is $3.29 for 28g, or $11.75 per 100g. Since I’m not a vegan, I may try this recipe with gelatin instead of agar agar powder if I make it again, just to save some money.

The recipe did come together as promised by the recipe; it was actually fairly easy to make, once I had the ingredients. Flavour-wise, I unfortunately can’t say that this dish tastes much like cheese. However, it is a tasty spread in its own right. I would put it on a bagel or a pita bread, or serve it with crackers at a party. But it can’t really be mistaken for dairy cheese. Darn it.

Also, when made in a bowl instead of a flat-bottomed ramekin, this vegan cheese visually reminds me of “chicken cutlet” silicone breast enhancers that are inserted into a bra. Possibly not the best choice on my part, aesthetic-wise, but it did make me laugh.