I’m still working through a batch of pumpkin puree that I thawed and then didn’t end up needing. One of my favourite pumpkin-based recipes is Pumpkin Spice Cream Cheese Spread by Pinch My Salt. The original recipe is simple — no cooking required, it’s as easy as throwing everything in a blender and pushing a button. Sadly, since I now have to avoid dairy products, any recipe based on cream cheese is out. So I made my own slightly-more-labour-intensive dairy-free version, and I think it tastes just like pumpkin pie.

My first version of this recipe was made with tofu, but that was a wash — despite the spices, it still mostly tasted like beans. My successful version is made with cashews as the base, which means it definitely contains nuts and is not school-safe. That’s okay, my kids can have dairy, I can send them to school with the cream-cheese-based version. My version also doesn’t use premixed pumpkin spice, but instead all of the individual spices that are usually found therein, allowing for a bit more customization. The recipe is vegetarian, and could be made vegan if you source your ingredients right (many brands of sugar, including brown sugar, use bone char as part of the filter process).

I like both versions of the spread as a dip for a freshly-cut-up cold, crisp apple. It also works well as a spread for bagels, toast, or a topping/core for muffins or cupcakes. 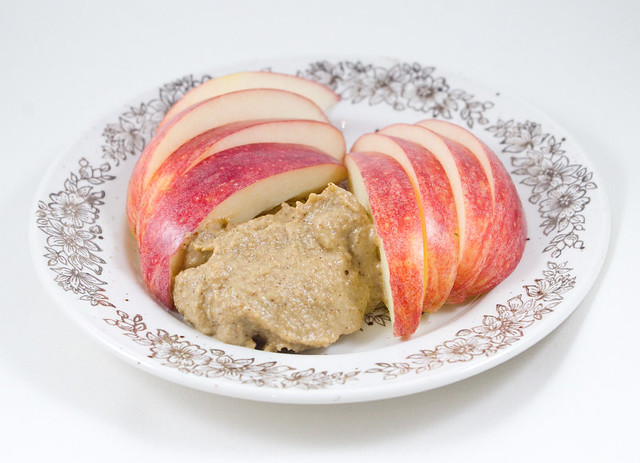 Pour into a heat-safe container:
– 1 cup roasted unsalted cashews
Cover the cashews with boiling water and leave them to sit for a minimum of 1 hour, up to 4 hours. Cashews should be plump and soft after soaking.
Drain water and place cashews in a blender.
Add to the blender:
– 1/2 tsp salt
– 1 Tbsp corn starch
– 3 Tbsp nutritional yeast
– 6 Tbsp brown sugar
– 1/4 cup maple syrup
– 1/2 cup canned pumpkin
– 1/2 tsp vanilla extract
– 1 1/2 tsp cinnamon
– 1/2 tsp ginger
– 1/4 tsp nutmeg
– 1/8 tsp cloves
– 1/8 tsp allspice
– 1/2 cup water
Blend mixture until smooth.
Pour mixture into a cooking pot. Stirring constantly, cook until the mixture just begins to simmer. This recipe will burn to the bottom of the pot very quickly, so stirring constantly is essential. Once the mixture has reached a simmer, remove it from the heat. Scrape the mixture into a container with a lid that seals, then refrigerate until cooled through. Serve.