It’s rhubarb season, and I only just discovered that rhubarb is one of my husband’s favourite “fruits” (I know it’s a petiole (stalk) and not a fruit, but it is cooked like one, so I think of it as being in the same category). We’ve only been married for ten years at this point, and have known each other for more than twenty, you’d think it would have come up in conversation before now. In any case, I do have a rhubarb plant in my old garden, which is an area of the yard where I used to grow things but have had to stop because the fence there desperately needs repair. We’re supposed to get a new fence this summer, so hopefully I’ll be able to plant a secondary garden against the fence next spring. All that being said, my rhubarb plant is under-performing, to say the least. 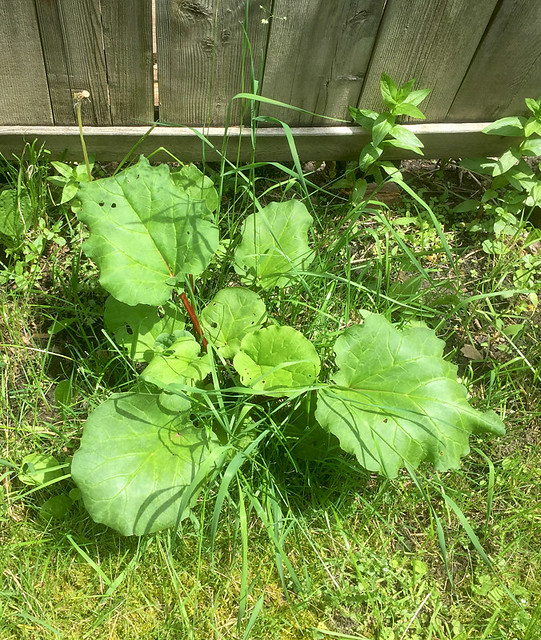 This plant is three years old and honestly looks like I just planted it this year. The stalks are losing a size competition to the grass. The plant has never been big, so I doubt that it needs to be split. I think it’s probably due to poor soil quality; I mean, I have never fertilized that garden, I just used the soil that was there when we moved in. Next year I’ll be sure to add compost and extra soil and see if that helps at all. With the new fence going in, there’s no point in trying anything before then… My plant may not survive the ordeal anyway. 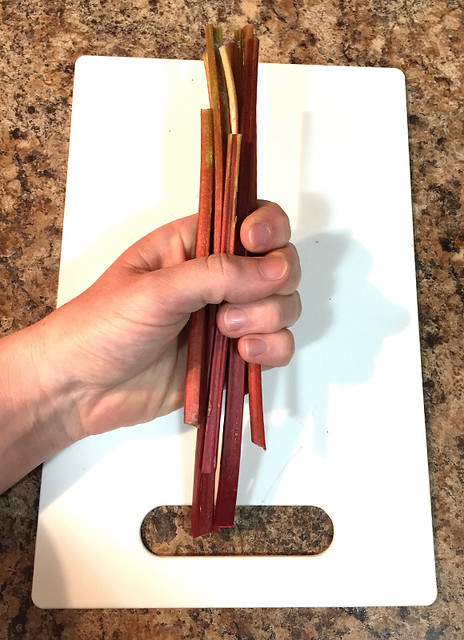 So that was my total rhubarb harvest: one handful of spindly little stems. Luckily, some friends of mine out in Russell have a plant that is trying its hardest to take over part of their back yard, and they let me harvest more than half of it in exchange for some homemade pickles. I could not have been more thrilled (or thankful)! So I got to cooking. 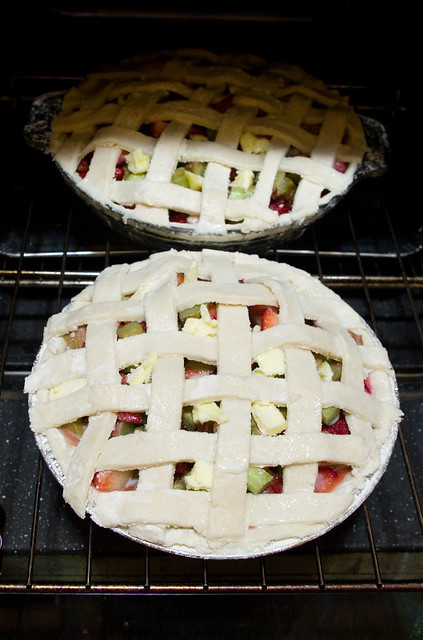 The first thing I tried, at my husband’s request, was strawberry rhubarb pie. I used the pie recipe from page 680 of the Joy of Cooking (2006 edition), but I used the Purity Pastry crust from page 73 of the Purity Cookbook (2001 edition), which is my preferred basic pie crust recipe. This was my very first attempt at a rhubarb pie of any kind, and also my first shot at a lattice crust, which I discovered isn’t terribly difficult, although it’s time-consuming. 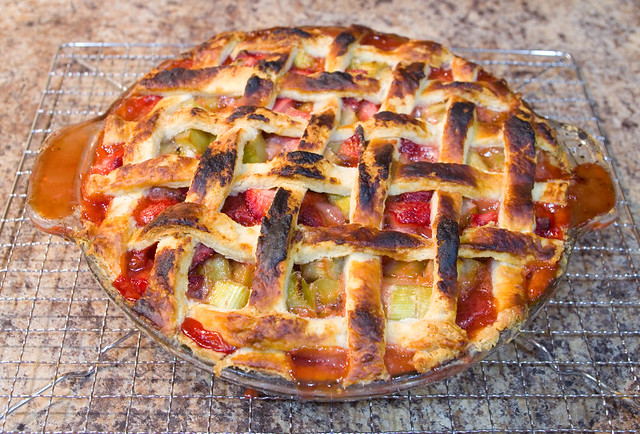 The top of the pie came out a little bit darker than I’d have liked, although it didn’t taste burnt. I kept my eye on the baking process, constantly monitoring the oven temperature, and it happened anyway. I am really starting to need a new oven. I can’t keep a bulb lit in there because it burns out within days, the temperature control isn’t accurate (which is why I have a secondary thermometer in there), and it’s so small that I can only cook one thing at once. Ah well, it’ll happen eventually. 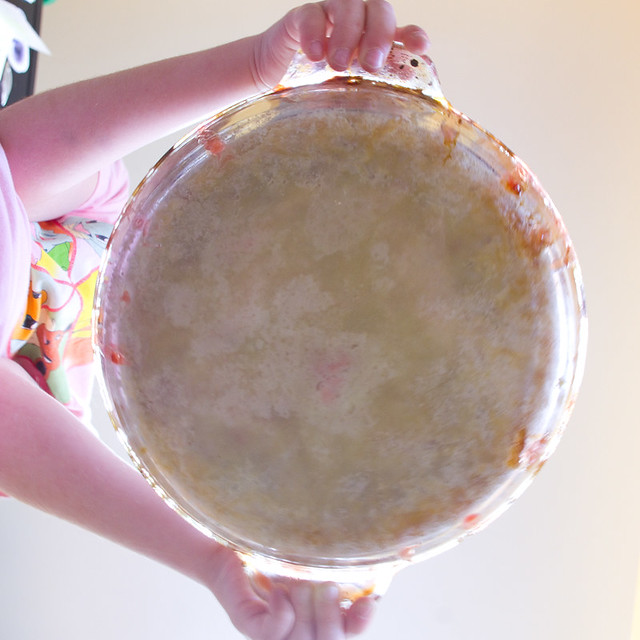 Thing 1 holding the pie over my head so I could lay on the floor and get a shot at the bottom.

What surprises me the most is that the pie wasn’t overcooked anywhere else. I would think that the bottom would be the most likely spot, given that I was using a baking setting where only the bottom burner was used. I know that the pie plate protected the bottom of the pie somewhat, but even so… Well, at least it tasted good.

As an aside, you might notice that the rhubarb in my dishes doesn’t look particularly red; that’s because the cultivar that my friends grow is ripe when the stalks are green, although sometimes they do have a slightly red tinge. It tastes just as good, even if the colour of the dishes isn’t nearly as spectacular. 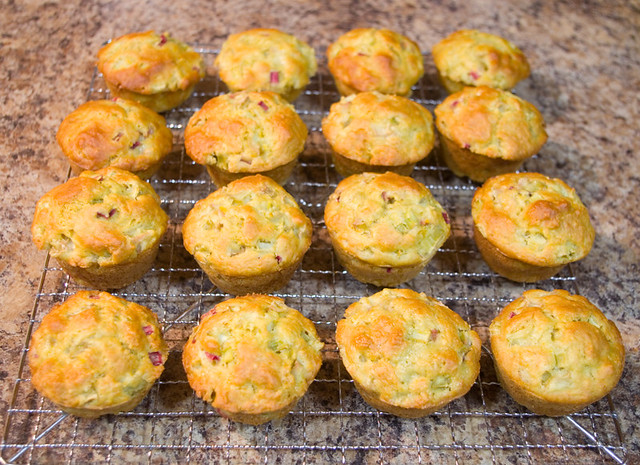 I’ve also been baking up loads of Rhubarb Orange Bread from page 22 of 125 Best Quick Bread Recipes by Donna Washburn & Heather Butt (2002). This book was a thrift store find that I definitely don’t regret! I made a few loaves of the rhubarb orange bread that were devoured by my family before I had a chance to photograph them, then a pile of mini-loaves for the freezer, and then a couple dozen nut-free muffins for the kids to take to school (the original recipe has walnuts). I prefer the taste and texture of the version with nuts, but I understand why it’s something that can’t be brought to school.

As I write this, I am in the middle of making up some slow-cooker strawberry-rhubarb butter. If it turns out, I hope to share the recipe. The one thing that I meant to make that I forgot about was a rhubarb crisp, for which there is a recipe on page 692 of my Joy of Cooking. If none of my other friends have excess rhubarb for which they’re willing to trade, I may have to buy a bundle at a farmers’ market this weekend just so I can make this dish. It’s been many years since I had one, but I remember it being delicious!