With my backlog of canning to do and a whole lot of events, parties, and decorating happening before Hallowe’en, I haven’t been making too many complicated meals lately. Now that the temperature has finally dropped (last night it dipped below freezing), that means that I’ve been trying to make hearty suppers that don’t take too much advanced preparation. 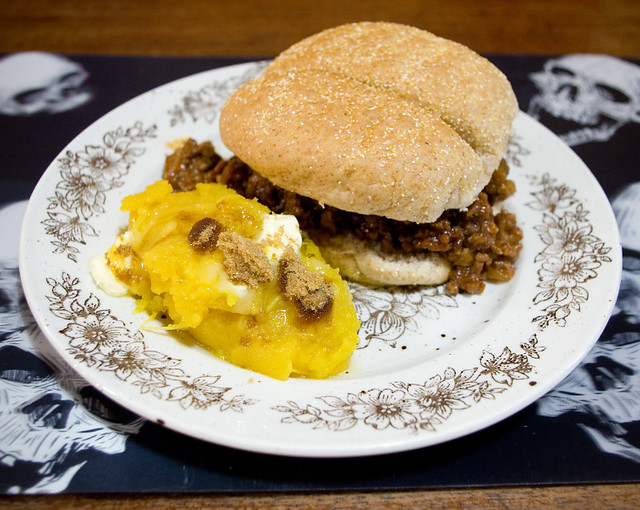 Sloppy Joes with a side of acorn squash with butter and brown sugar.

Believe it or not, I’d never made Sloppy Joes before. It’s just not something we ever ate as a family. The closest we’d get would be open- or closed-faced sandwiches of chopped up bits of leftover beef, pork, or chicken, smothered in leftover gravy. But I’d taken the Amish Community Cookbook (2017) out of the library, and I wanted to try at least one recipe from it before I had to return it. I didn’t think that Sloppy Joes were a particularly Amish dish, but there was an uncomplicated recipe on page 63, so I gave it a shot. It was really good! I had my parents over for dinner and they liked it too. My mom pointed out that the sauce is actually a lot like the one she uses for slow-cooker pulled pork, and I have to agree (keeping in mind that I love pulled pork too). 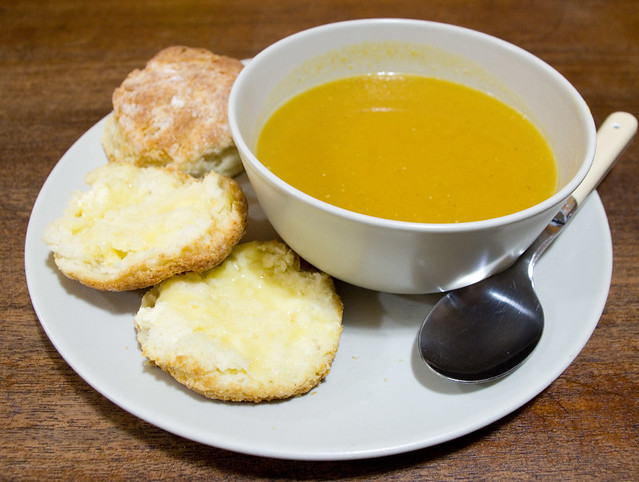 The other night I needed something I could put together quickly, so I dug through my freezer and thawed out a couple of containers of curry butternut squash soup. I’m pretty sure that my mom made this dish and shared it with me, because I certainly don’t remember making it. The label was dated December 2016, though, so it might just be time making me forget. My husband pointed out that the labels were in his writing and the containers were our own, which indicates that I’d made the soup, but I think it’s just as plausible that I had to return my mom’s original container. Either way, I don’t know what the recipe was for this one (another one of those pre-blog things), but it was perfect for a cold fall evening. The biscuits I served alongside were Dad’s Biscuits, which I whipped up in about the same amount of time it took to thaw the soup on the stove. 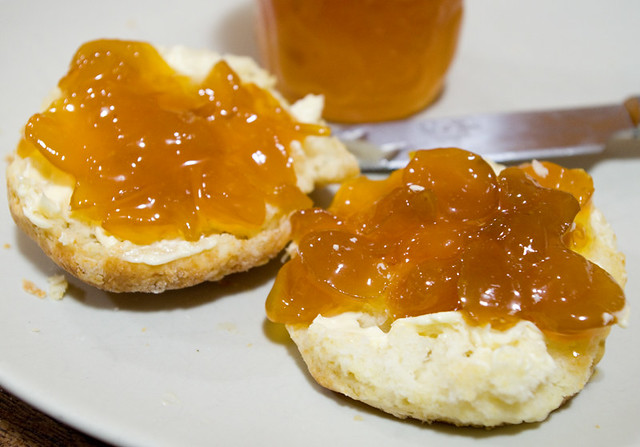 Since we already had some steaming fresh biscuits, I cracked open the jar of mirabelle plum jam that my friend made from the fruit of her neighbour’s plum tree. I spread the jam generously on biscuits as dessert. My mouth is watering just thinking about that it. My friend was a little worried about the set, thinking that it would be a little bit too runny, but I thought it was perfect. 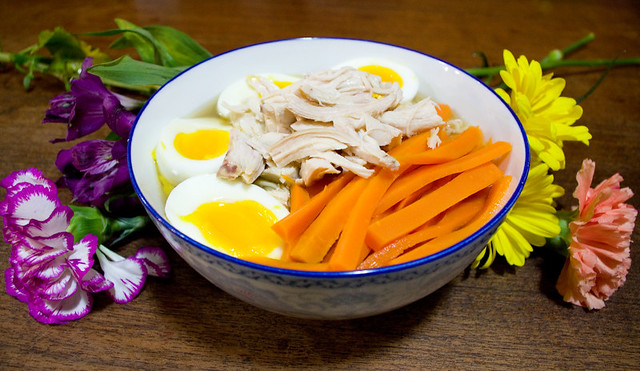 Despite the flowers (a hostess gift from my honorary aunt), this dish was anything but fancy. I made up some ramen using turkey broth (made from the bones of the Thanksgiving turkey) flavoured with a dash of Memmi Noodle Soup Base. I topped the noodles with leftover rotisserie chicken, soft-boiled eggs, and steamed carrots. My family added masago (capelin roe) and dried shrimp to their tastes. It was hearty, filling, and good for what ails you — especially if what ails you is the cold that seems to be going around right now. I’ve always found that steamy bowls of soup help clear out the sinuses.