Yesterday was another busy day, followed by a trip to Costco as soon as the girls got home. The trip took over two hours; I can never get out of that place in a reasonable amount of time! Luckily, Thing 1 and Thing 2 were very patient, which couldn’t possibly have anything whatsoever to do with the plethora of food samples that they were able to try. By the time I finished at the store and drove home, I had eaten significantly into the time that I usually use to prepare dinner. Something quick and easy was in order. 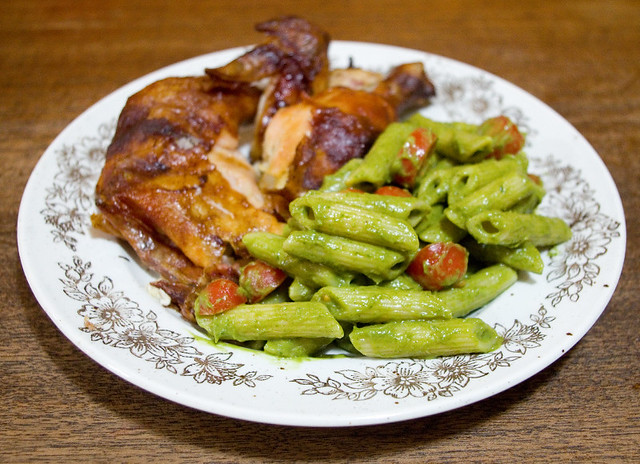 I have to say that the Avocado Pasta Sauce that I wrote about earlier this week is definitely a quick and easy dish. In the time that it takes to boil up the pasta (assuming you’re using dried — fresh stuff only takes a couple of minutes), the sauce is done. Since the sauce only requires prepping a few veggies and running them through a blender, it’s also very simple. This time I took my own advice and added a generous handful of fresh basil and cilantro to the mix, along with a bit more pasta water to thin it all out. I was much happier with the flavour this way — it wasn’t so plain! I sliced a few cherry tomatoes and tossed them in with the pasta and sauce as well for a bit of an acid zing. I also discovered that a generous shake of Parmesan cheese tops this dish nicely. (I’d suggest using a bit more salt and pepper if you’re going to forego the dairy.)

I served the avocado sauce on penne basically because it was the only wheat-based pasta that we had in the house (I didn’t think it would go terribly well on vermicelli or soba noodles). For the meat, I just carved up a rotisserie chicken that I’d picked up at Costco while I was there. It was a tasty and satisfying meal that was whipped up in the amount of time that it takes to boil some pasta. Not bad!