So I have a bit of thing for hunting for interesting vintage kitchen gear. Part of this is the love of the hunt, part of it is because I love the look of older pieces, and part of it is because I actually use a lot of these things and I just can’t afford to buy them new. And, let’s face it, the phrase “Reduce, Reuse, Recycle!” was beaten so thoroughly into my head as a child that I just can’t shake it free. My new toy is a case in point: a Oster Regency Kitchen Center, circa 1983. 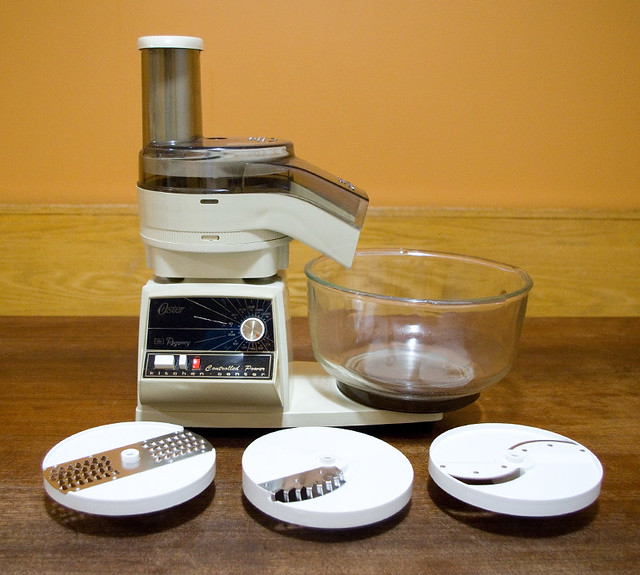 I adore the styling of the KitchenAid and Smeg stand mixers, but heaven knows that I can’t afford one. I do have a beautiful Dormeyer Princess mixer, but so far I only have the mixer attachment for it. My new-to-me Kitchen Center has slicer/shredder/salad maker/French fry cutter, mixer/doughmaker, and blender attachments. Actually, it originally came with a grinder as well, but that part went missing sometime in the last 35 years. 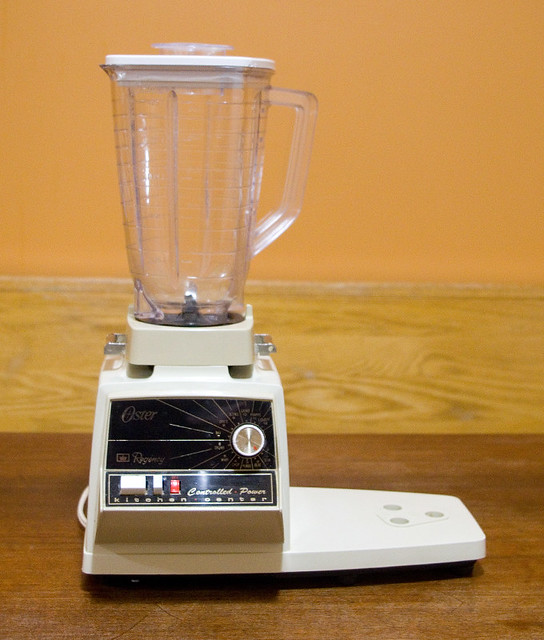 Also missing: the mixing bowls! Well, two bowls that looked about right came with it, but it turns out that they weren’t the correct ones. I shopped around at my local thrift stores and found a total of four that work for about $20, which is reasonable when you consider they’d be about $70 on Amazon.

I was a little worried when I took the machine apart to clean it and realized that some of the gears are plastic. I have a bad habit of putting too much strain on my machines and stripping plastic gears. I’ve ruined a couple of blenders that way. Luckily, the gears for the blender attachment are all metal. We’ll see if the other attachments’ gears are durable enough to withstand my not-so-tender ministrations. 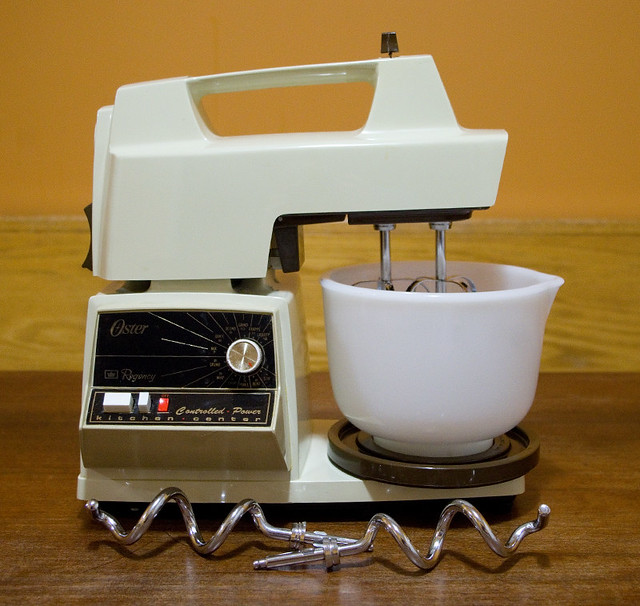 I have to admit that the part I am most enthused about is the stand mixer/dough maker. So many recipes and instructional videos just call for you to use one. I mean sure, it’s possible to do it all by hand, but sometimes I just don’t want to put in all that effort. Also, it can sometimes be a bit tricky to translate directions (especially timing/consistency) from machine mixing to hand mixing.

Apparently there were a whole lot of other attachments that were additional, optional purchases. The one that interests me the most was the pasta accessory, which included five processing discs for thin or thic spaghetti, lasagne, rigatoni, and fettuccine. Unfortunately, it looks like it attached to the (missing) grinder. So I’ll be keeping an eye out for these pieces during my future thrifting expeditions. There may be homemade ramen in my future yet!