Recently, my husband and I were playing Borderlands 2 online with another couple who are good friends of ours. At one point I had to take a brief AFK break to take a pie out of the oven, causing our friends to jokingly lament that they didn’t have pie too. At that time, their birthdays were swiftly approaching, so I promised them that I’d make them pies for their birthday. Well, their joint birthday celebration (their birthdays are only a couple of days apart) was this past Friday, so on Thursday night I had to make their pies. 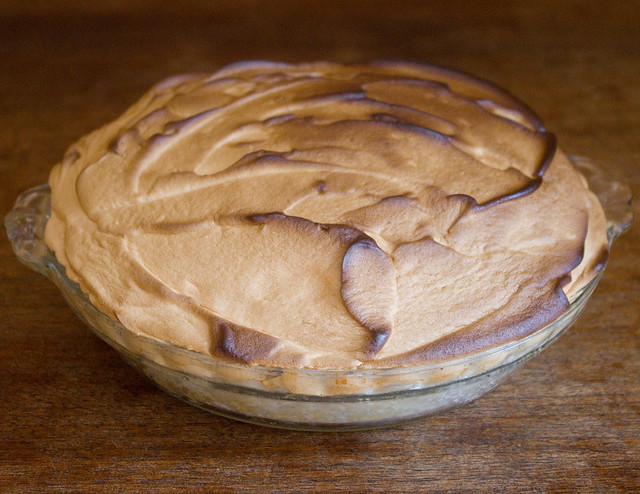 I decided to make two totally different kinds of pies, and I started with a lemon meringue. I used the crust recipe from page 73 of The All-New Purity Cook Book (Elizabeth Driver, 2001), the filling from page 687 of the Joy of Cooking (Rombauer & Becker, 2006 edition), and Soft Meringue Topping #1 on page 798 of the Joy of Cooking. I’ll confess right now that I had never made lemon meringue pie before, even though I quite like it. I’d only tried a meringue once before and that failed spectacularly. I don’t know what I did, but no matter how hard I whipped it, the meringue never formed peaks at all, it just stayed runny. I was really worried that it wouldn’t turn out right. 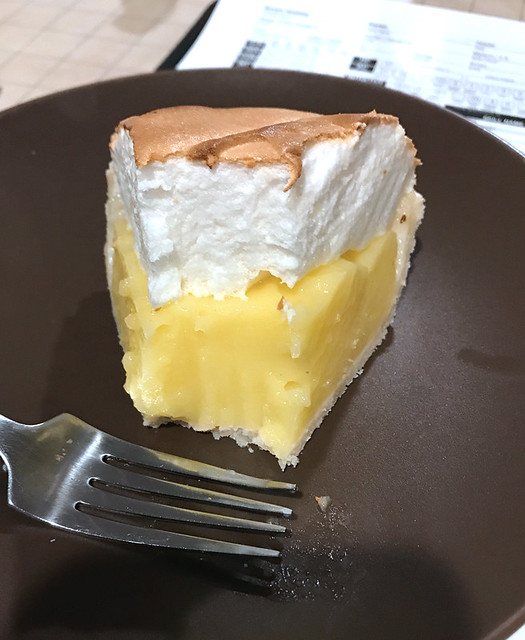 In the end, I’m quite proud of my first lemon meringue pie, even though I singed the topping a bit. I have got to remember that my oven heats unevenly and that I need to check on my baked goods more often. I mean, I set a timer for the minimum time recommended and then checked it with five minutes to go, and it was still a rather dark brown (I was aiming for a toasted gold). If I’d left it in five minutes longer, it would have been burnt. Luckily, the colour was only on the surface, and my friends said it tasted just fine. They served it up to their gaming group when playing D&D on Sunday night, and everyone liked it, even one person who generally doesn’t like lemon meringue. I’m wondering if that’s because I used fresh lemons and lemon zest when I made the filling from scratch, instead of using canned filling. 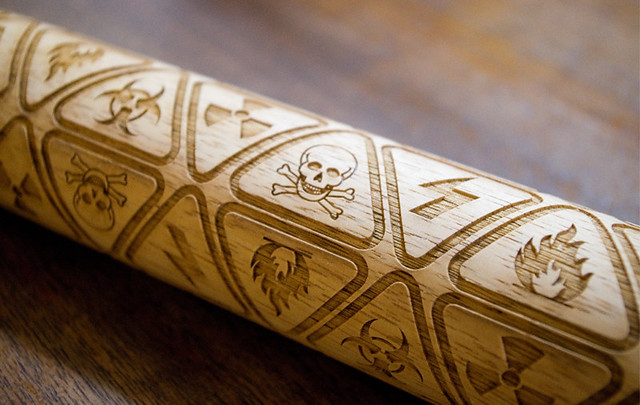 For the second pie I went with a fruit-filled pie, which something I’ve done successfully a million times before, just in case. I mean, given the disaster with the bitter pumpkin pie at Christmas, experience doesn’t always mean mistake-free. But I’m fairly confident that it will taste fine (especially since you can honestly completely omit sugar in most fruit pies and it’ll still be palatable). For kicks, I rolled the top crust using a laser-engraved rolling pin that I received as a gift a while back. It features the hazard symbols for poison, ionizing radiation, high voltage, and biological hazards. Something tickles me about using this on food. 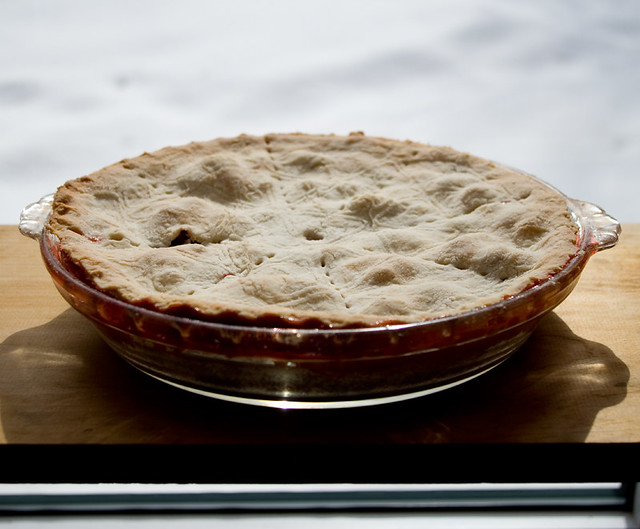 What with a fruit pie crust never baking flat, it’s hard to see the design, but it is there. I also vented the crust using a 8-Piece Pie Divider for the first time, which was a gift from another friend. It is honestly the weirdest-looking gadget in my kitchen, but it works quite well. The recipe for apple-strawberry pie that I used can actually be found on the back of its packaging box — although I did use the same Purity Pastry crust for both pies, since it’s just easier to whip up one big batch instead of multiple small ones. I used leftovers of that crust, along with some extra fruit from the fridge, to make the fruit tarts that night as well.

Honestly, I’m kind of hoping that this baking-as-a-birthday-gift idea becomes a regular thing. As my friends and I get older, I find it harder to shop for presents, since I know the things that they really want is way out of my budget, and we all have more clutter than we really need. But food is a necessity of life. And just maybe on our birthdays we deserve to be able to elevate a basic need to something a little more special.