A friend of mine bought me a copy of the Better Homes and Gardens Treasury of Christmas Crafts & Foods for Christmas, and leafing through the project ideas therein brought back many memories of the kinds of crafts that I did when I was growing up. One of the ones that stood out the most was the salt dough Christmas ornaments. Although I never made any in the patterns suggested by this book, I did make some simple ones through Brownies and Guides, and I had a lovely little girl in a red dress as part of my ornament collection until she eventually fell apart. I thought that my kids might enjoy playing with dough that becomes a permanent creation for a change. (If your kids would basically like to do the same exercise but come away with something that they can eat, I would highly recommend Cookie Monster’s Famous Cookie Dough instead.) 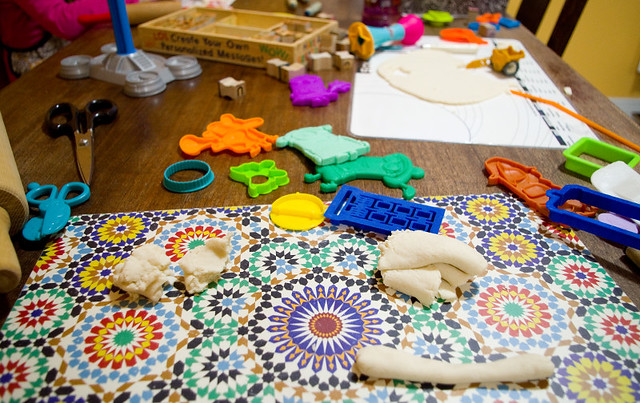 Rolling out the dough and cutting it out with cookie cutters and Play Doh cutters.

I did my due Googling, and I discovered that although the style of ornament that people make has changed a bit over the years (especially when it comes to the choice of colours used), the actual technique remains the same. Multiple books and many sources on the Net stick to the basic recipe of:

Which you then knead together to create a stiff dough. You then cut out/shape your designs and lay them on parchment paper on a cooking tray. Advanced creations can take a long time, a lot of skill, and a great attention to detail. However, when you’re making crafts with younger children, quick and easy cookie cut-outs are the name of the game! As a bonus, since the dough is so cheap to make and is 100% biodegradable, if the kids proclaim themselves done after having made very few cutouts, it’s not too big of a deal. 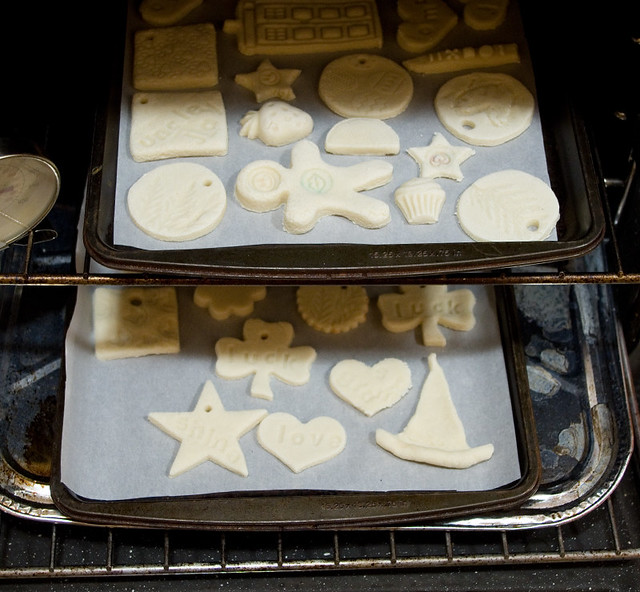 After shaping, you put the salt dough creations in the oven at 200°F (93°C) for… Well, that’s where directions vary. I think it all really depends on the thickness of the final pieces. I’ve seen it anywhere from two to eight hours, so I kind of guessed at three, which worked out okay. I think that what everyone agrees on is that you don’t want to bake or brown the dough, you just want to remove all the moisture. 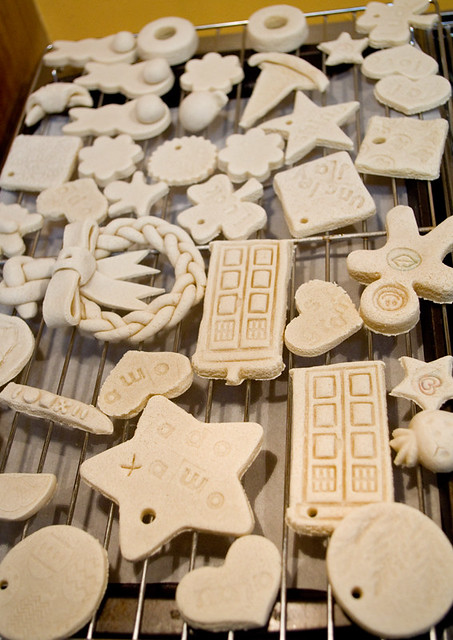 Then the cut-outs need to be cooled on a cooling rack, which doesn’t take all that long, really, since they weren’t terribly hot in the first place. We left them overnight to hopefully remove the last of the moisture. It’s not like you have to worry about them going stale, after all. 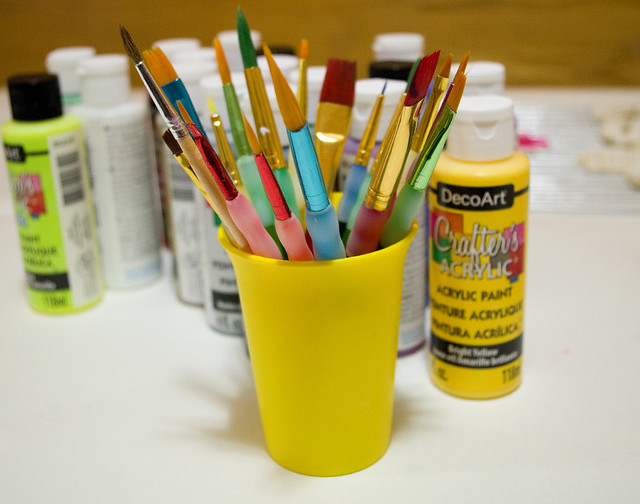 Then it was time for paint! I have what seems like a million colours of acrylic and many different paint brushes, all from the dollar store. If you don’t have a stash of paint and want to keep costs low, stick with red, yellow, blue, black, and white. The kids can mix any colours they want with the primary ones, and it’s a good lesson in colour theory. 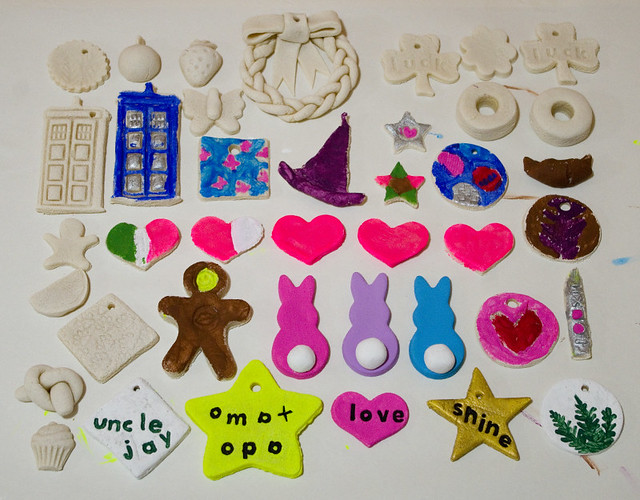 To be honest, my girls ran out of patience with the fiddly details, so the painting will have to be completed another day. Since I had to make dinner, I didn’t get a chance to finish painting the ones that I made either, so we’ll have to sit down and do them all together tomorrow. I really liked how the ones with the impressions turned out, though. The girls used rubber stamps, carved rolling pins, and even leaves of plants to create textures. 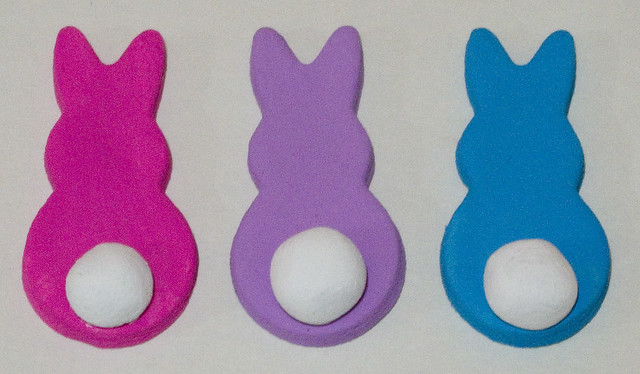 Of the ones that I painted, I am particularly happy some of the simplest: the Easter bunnies, made using a cookie cutter and a little ball of dough for the tails.

The next step is to seal salt dough, which I’d prefer to do with spray-on acrylic, so that will probably have to be done out in the garage once it warms up a bit. I’m told it can also be done with Mod Podge or PVA glue, both of which I own, but I’d like to test them first to see how badly they smudge. Then the ones with holes will become ornaments, and the ones without holes will have a magnet (also from the dollar store) glued on the back to become fridge magnets.