A while back, just in time for my annual Halloween party, I was shopping for fruits and veggies from Costco to include on some platters. On a whim, I picked up a box of golden berries, which I honestly thought I’d never seen before. After a little bit of research at home, I discovered that they’re also called “ground cherries” or “husk cherries”, which I’d actually seen at the farmers’ market, and I’d seen the plants at the garden center. Despite the names, they’re not cherries at all; they’re part of the nightshade family, and are more closely related to tomatoes. The berries grow inside of paper husks that strongly resemble Chinese lantern plants. Apparently they’re pretty common to grow (varieties are native throughout the US and Mexico), but aren’t sold commercially here very often, which is why I wasn’t familiar with them. 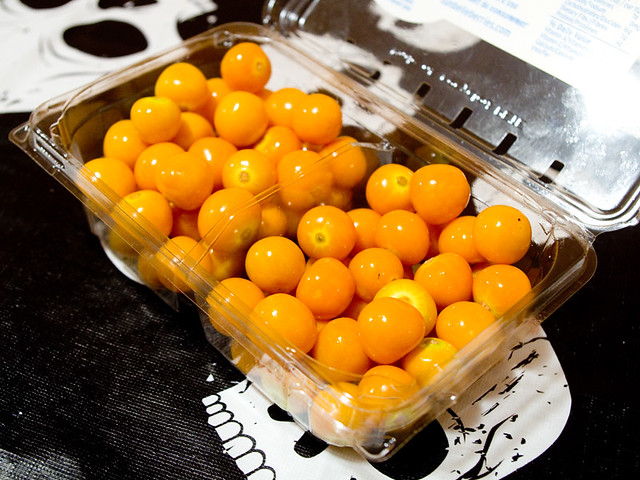 I discovered that golden berries are a strongly sweet/tart flavour that is really hard to describe, except to say that they are delicious! They have a texture similar to a very meaty tomato, something like a less-juicy Roma. I served them as-is, but later I went back to the store for more and included them sliced in half in salads, and blended into smoothies. When garden planning season rolls around next year, I think I will try to add a few golden berry plants to see how they like my soil. I’ve had good luck with tomatoes and satisfactory harvests of potatoes, but my peppers haven’t fared nearly as well, so who knows how this new nightshade-family plant will fare. I’ve read that they can even be perennials, but sadly that’s for Zone 8 and above; it gets much too cold here in the winter.

What I’d really like to do is make golden berry jam next fall, since I found the fruit’s flavour to be a refreshing change to the usual fare around here. I mean, I could do it with store-bought fruit this year, but at $5.99 for 340g (which might maybe make a single jar), making a batch is a tad out of my budget.

One thought on “Golden Berries”