Manning my first stall at Russell Flea was a lot of fun, and it was definitely a learning experience! I learned that the lights that I bought (from Dollarama, since a lot of people have asked) don’t fit through the bottom slats of all of the display crates, so I’ll have to widen a spot for them. I learned that it takes a really long time to pack and unpack a table’s worth of glass and stoneware when you have to unwrap and wrap every single item to prevent damage in transit. I learned that paper is great for wrapping delicate items if you only need to do so once or twice, but it disintegrates really fast (you’re better off using old fabric — blankets and towels are best — if you’re going to do it repeatedly). I learned that an apron with a lot of change in the pockets which ties around your neck can make your neck really sore if you wear it all day. I learned that people have really fond memories of old Tupperware and Pyrex. 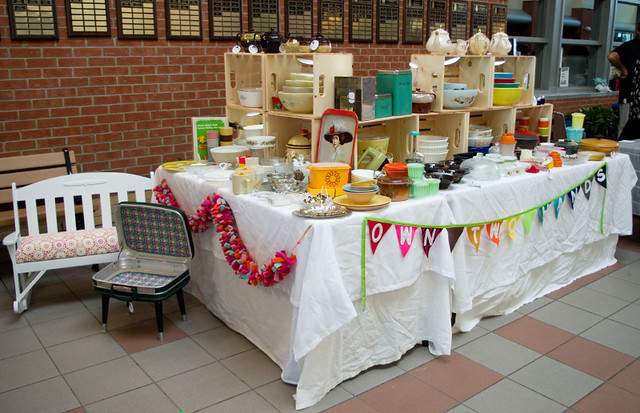 Oh yeah, and I learned that I should be careful not to cram all of my tablecloths as tightly as possible into one bag, so that they effectively have the wrinkles pressed into them by the time I arrive at the venue. Whoops.

But I did have a good time. I got to chat with some friends who stopped by, and meet the vendors around me with a great deal more experience than I. I may even have met someone who can teach me how to spin if I ever manage to get my spinning wheel repaired. 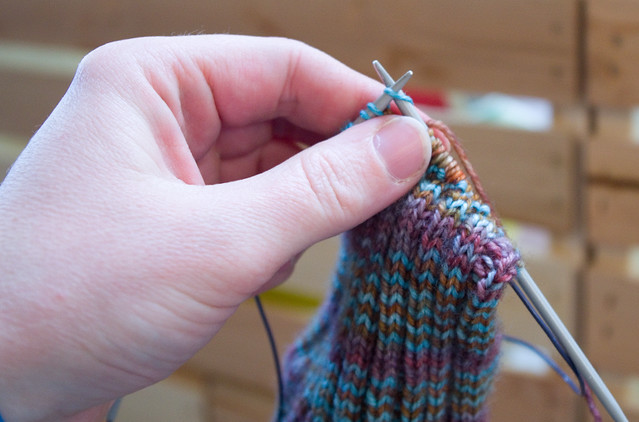 One of the nice things about working for myself is that I can knit and mind a stall at the same time, once it’s all set up. That’s not something you’re generally allowed to do in a traditional retail setup. I find that it’s a great conversation starter. I managed to get about a third of a sock done that day. 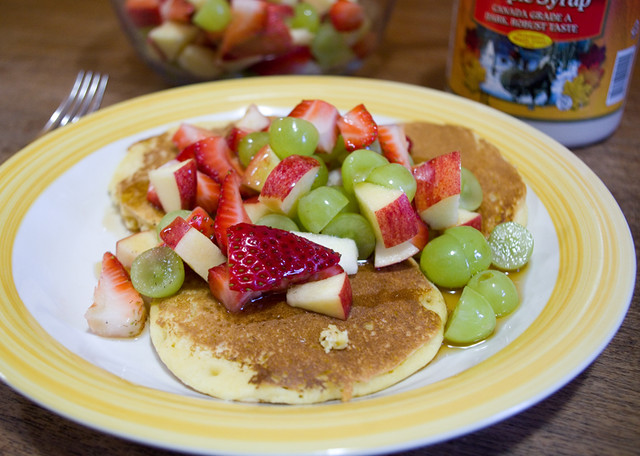 Since I was away all day working, my husband did have to make dinner which was, at the request of the kiddos, pancakes! Hubby had never actually made pancakes before, although I was sure that that was a basic thing that everyone around here knows how to make if they cook at all. My husband is an unenthusiastic cook at best, but he has learned the necessary skills. His pancakes turned out really lovely! Fluffy and delicious, and smothered with fruit and maple syrup.

Speaking of syrup, apparently the sap has been running since that weird warm spell back in February, so the local tree farms should be getting a great harvest this year. Note to self: I need to pick up some more local maple syrup when I’m at Russell Flea again two weeks from now. I’m pretty sure it’s McCannell Craftwork was the farm that brought the syrup on Saturday, and I hope they’ll be back again. 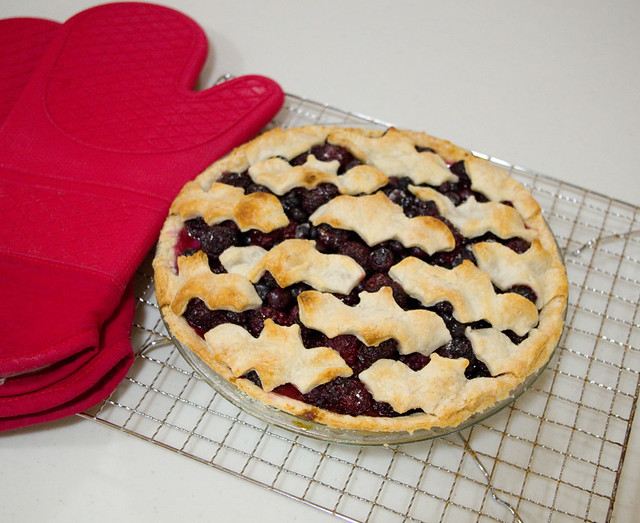 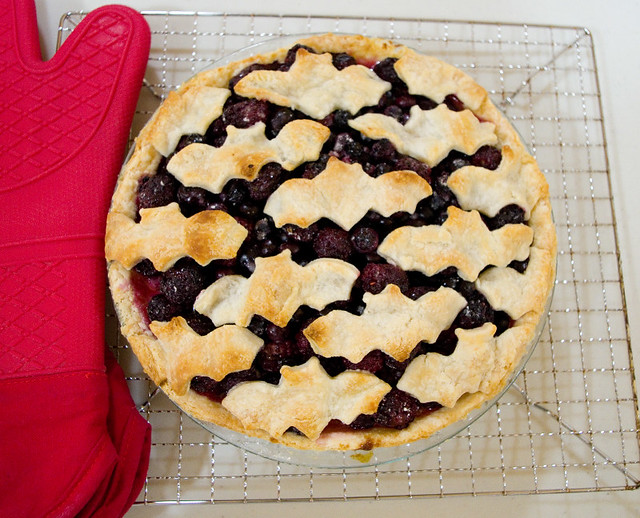 A few days ago at the cottage, the rain started at something like 6:00am and didn’t let up for another twelve hours. This wasn’t a warm, soft, summer rain that invites you to go puddle stomping. No, it was a cold, drenching downpour complete with thunder and lightning; it was a preview of fall. There were a few short breaks throughout the day, but the storm didn’t let up entirely until just before sunset. After a long day inside, my parents, my kids and I couldn’t wait to get out for a walk. 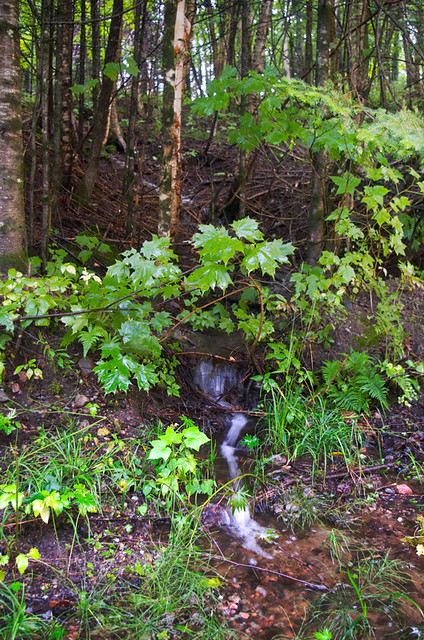 Small streams and even miniature waterfalls had sprung up in the aftermath of the storm, draining all of the water that the ground couldn’t absorb towards the lake. It’s been such a wet summer that the ground became saturated extremely quickly. The girls couldn’t have been happier, though, because this meant puddles and rivulets to splash in. Frogs were out in force, coming out into the damp after the rain to catch the evening mosquitoes. 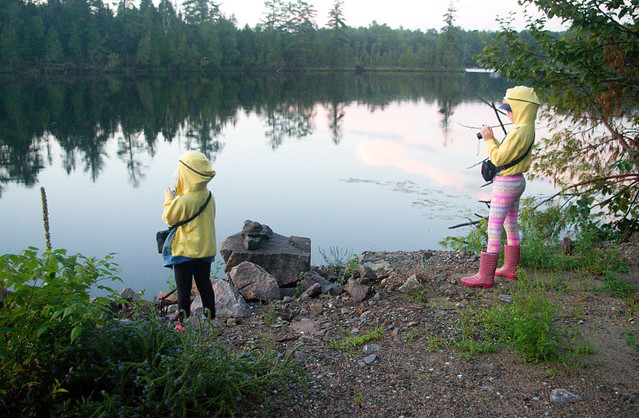 Of course, monkey see, monkey do. Thing 1 and Thing 2 insisted on bringing along some of my old cameras so that they could take pictures on our walk as well. I can think of worse things about me to imitate.

Note that the girls are covered as much as physically possible by clothing. The bugs were really bad on that walk, what with a combination of the sun going down and the rain letting up. 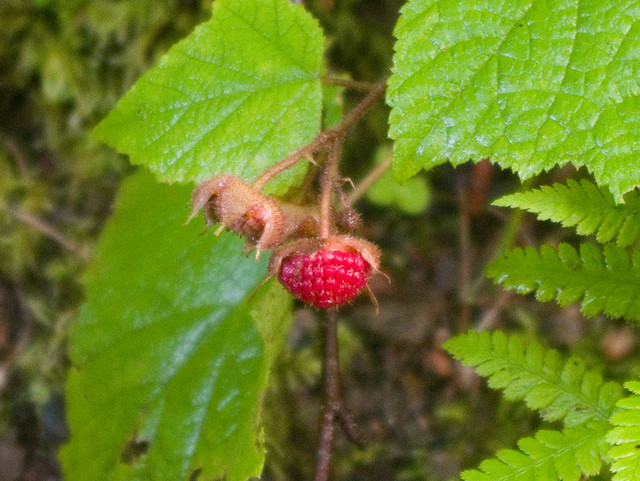 As so many of our nature walks do, this turned into an educational session. We identified as many birds as we could, even though I’m no birder. The bluejays, chickadees, and wrens flitted from tree to tree in front of us, and a flock of wild turkeys crossed the lawn in front of someone else’s cottage. We identified as many plants as we could as well, in my case focusing on the edible wild plants that I recognized. I’m not an expert on the subject by any means, but I am eager to learn. We did find a whole bunch of what I had always been taught were a variety of wild raspberry along the side of the road, and we picked a few ripe ones to eat. I’ve learned that these are actually called thimbleberries. I mean, I knew that they were edible, but for years I had been giving them the wrong name. 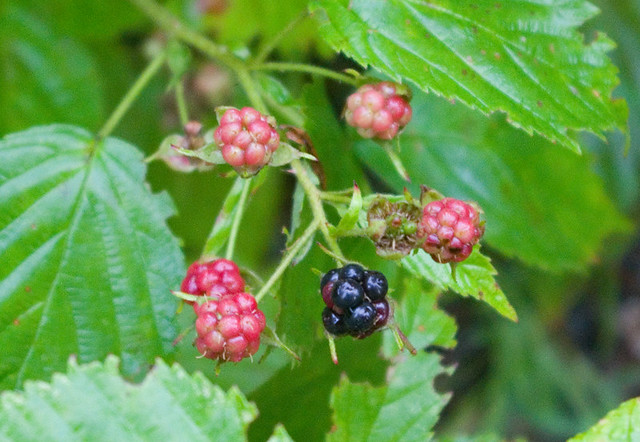 We also found a small blackberry thicket, and of course we had to pick every ripe berry we could reach. It ended up being only a couple of handfuls, but I wasn’t wearing the right gear to venture into the center of the patch. I was pricked enough by the thorns just reaching in past the edge. It was totally worth it, though, and I have mentally marked the area for future pilfering. 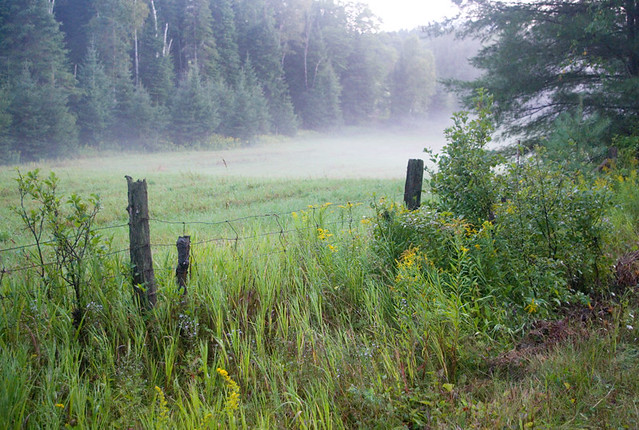 As we walked back to the cottage, a mist began to rise from the clearings and low-lying areas as the temperature rose very briefly before sunset.