I’ve been taking the opportunity to play with my bread machine over the last little while, and not only because there have been some stinking hot days (30°C (86°F) with a humidex of 40°C (104°F) this past Sunday) where I don’t feel like baking in the oven. I’ve picked up a few more books about maximizing the potential of a breadmaker, and I think that the new knowledge I’ve gained, and the new recipes, are really making a difference in the results I’m getting. 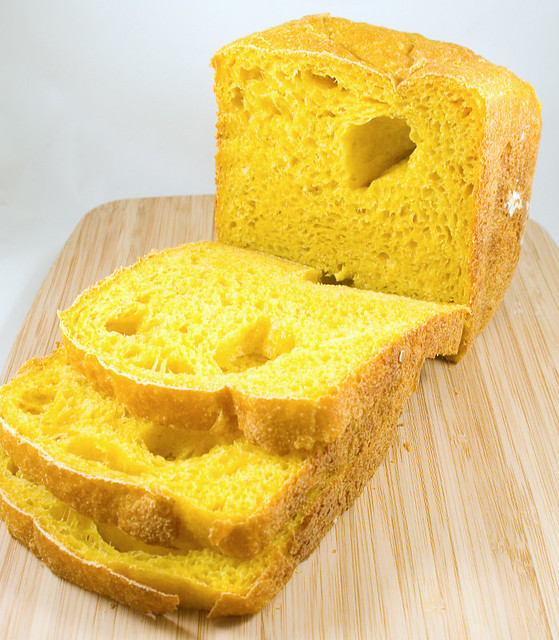 For this bread I used the Golden Pumpkin Bread recipe on page 167 of Bread Machine: How to Prepare and Bake the Perfect Loaf by Jennie Shapter (2002), omitting the pumpkin seeds. The nearly-fluorescent orange colour was created by using the homemade pumpkin puree that I canned last fall. Some of the pumpkins that I cooked up after Halloween were white-skinned (probably Casper pumpkins), and their flesh was a more brilliant orange than the usual orange-skinned pumpkins you get around here. I also bought a variety of pumpkin that had skin that was a deep reddish orange, with a very intensely-orange flesh. The resulting bread was lovely and moist while still being light, with a slight tang of pumpkin that goes well with hearty dishes like casseroles and soups. 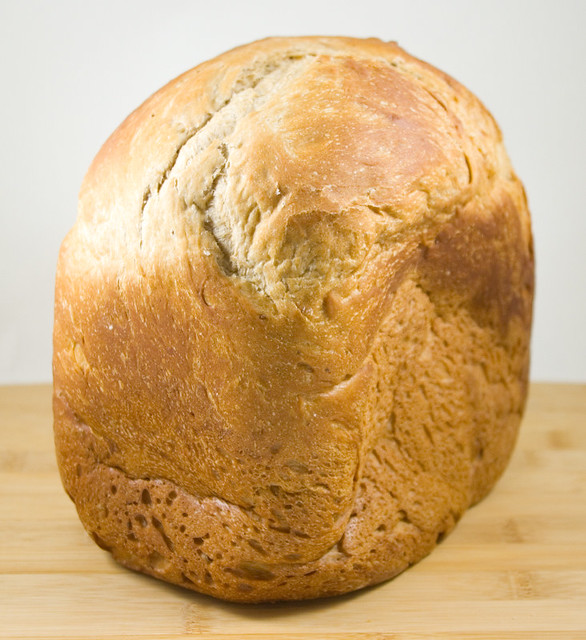 This loaf, although it doesn’t look spectacularly interesting, but it had a lovely, subtly-sweet flavour. It was based on the Apple Butter Bread recipe found on page 172 of The Complete Guide to Bread Machine Baking from Better Homes and Gardens (1999). To take advantage of my recent batch of strawberry-rhubarb butter (which I will share the recipe for soon), I used that instead of apple butter, and omitted the apple pie spice/allspice. This bread isn’t as moist as the pumpkin bread, but is more moist than your average white or brown bread. As per the cookbook’s suggestion, I have tried it with honey for breakfast, which was absolutely divine. I haven’t tried it as part of a grilled cheese sandwich with cheddar cheese due to my issues with dairy, but I predict that the flavour combination would be amazing. 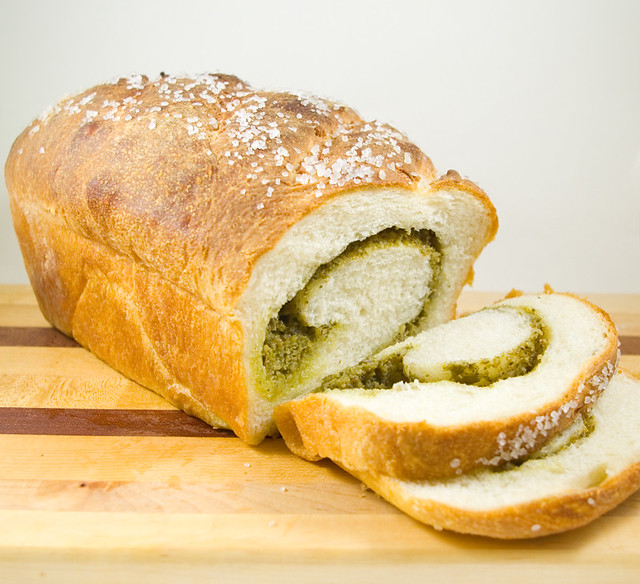 Last but not least, my favourite bread machine experiment so far has been Marbled Pesto Bread from page 142 of Bread Machine: How to Prepare and Bake the Perfect Loaf. For this bread I used the Roadapple Ranch garlic scape pesto that I wrote about previously. The bread recipe required using the machine’s dough cycle, which means that the bread is then baked in the oven. It’s the economical version of using a stand mixer for bread dough, really, except that it also proofs the dough. The dough is rolled up kind of like a jelly roll, but with pesto instead of jelly. The final results were delicious! My husband has not stopped raving about this bread since I made it — and I’m pretty sure he ate most of the loaf. We didn’t serve this bread with anything; it was perfectly good all on its own, even without butter. I’m definitely making this one again once the days cool down a bit so I don’t roast myself by using the oven.