It’s less than a week until Canada Day (July 1st), and this year it’s a big deal because it’s the country’s sesquicentennial, 150 years since Confederation. It’s a pretty big deal around here. There are all kinds of events planned surrounding the holiday, much more extensive than the usual celebrations. I’m not sure yet what we’re going to take part in, but it’s worth noting that most of the museums are free on Canada Day (especially useful if it’s raining but you still want to do something), and the fireworks are always spectacular.

Until the big day, though I thought I’d cook some typically-Canadian or Canada-themed dishes to start the celebrations. Canadian cuisine is really hard to pin down, as it’s very regional and is strongly influenced by the immigrants that settled in the area. Since I am predominantly of British descent, my idea of Canadian food is British-Canadian, but since I live in an area with a strong French-Canadian presence, that affects my idea of typical Canadian food as well. If you live in a different part of Canada, or come from a different heritage, your idea of typical Canadian food may be totally different — and that’s totally okay. As former PM Joe Clark put it, “Canada has a cuisine of cuisines. Not a stew pot, but a smorgasbord.” 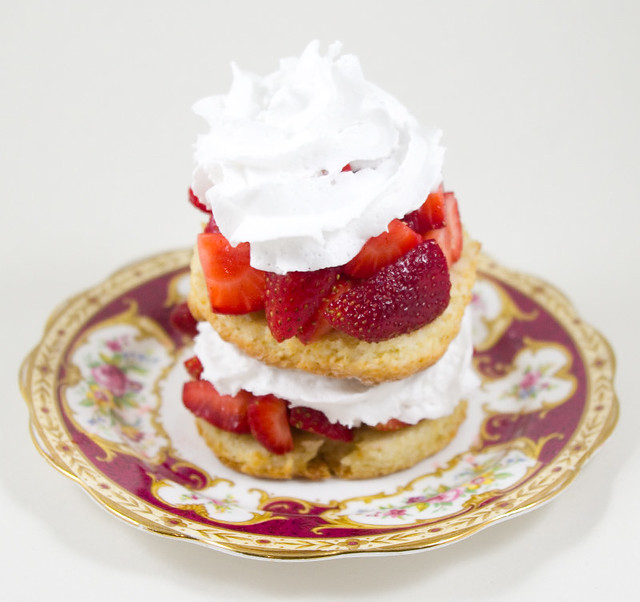 The first dish I made to celebrate Canada Day was nice red-and-white strawberry shortcake, according to my Nan’s (my dad’s mom’s) recipe. It’s a fairly simple recipe that can be whipped up quickly. If you’d prefer a no-bake red-and-white dessert recipe, I would suggest The Cat’s Hat Parfaits.

Make up a batch of
– Dad’s Biscuits
However, replace the 2 tsp of sugar in the recipe for
– 3 Tbsp sugar
This will make a sweeter biscuit that is more suitable for dessert.
When shaping the biscuits, instead of using the drop-off-a-spoon method used in the photos, roll out the dough onto a floured surface to between 3/4″ and 1″ thick. Use a round cookie cutter or a floured drinking glass with straight sides to cut the biscuits to a uniform size. Follow the rest of the instructions as per the recipe.

While the biscuits are baking, cut up about:
– 1/2 cup of strawberries per shortcake
Only cut up as much as you’ll need to serve right away, as strawberries tend to go bad more quickly once they’re cut.
In a separate bowl, whip together until fluffy:
– one 237mL package whipped cream
– 2 tsp sugar
– 1 tsp vanilla
Alternately, you may use spray whipped cream in a can, or non-dairy whipped topping.

Alternately, make the biscuits in advance and assemble the shortcakes immediately before serving. Do not assemble them in advance, or they will get soggy.