One of the foods that I fell in love with in Japan is Japanese curry. It’s very different than any Indian, Thai, or even British curry I have ever tried. It’s generally a lot of rice, a lot of creamy sauce, and a tiny bit of meat — and it doesn’t have to be very spicy at all. It’s the kind of thing that you can find as cheap street food or sold out of tiny little take-out shops. When you make Japanese curry as a homemade dish, it’s a comfort food, and it’s generally prepared with boxes of pre-made sauce cubes with the spices suspended in a kind of solid roux that melts with the addition of heat. It’s really very easy to prepare. There are a number of companies that make this kind of thing in Japan, but the easiest to come by both there and here in Canada is Glico Curry. 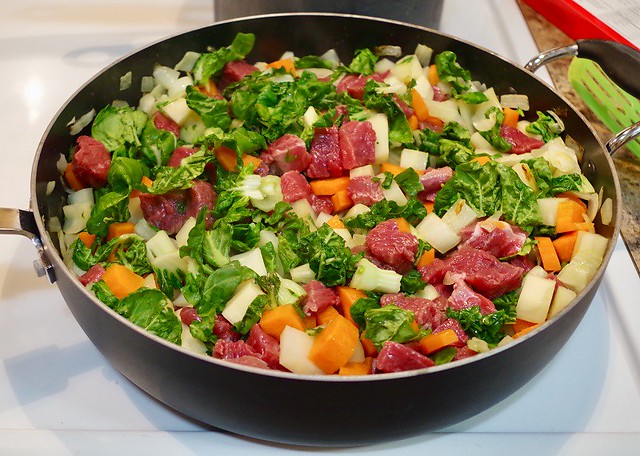 We were having my brother-in-law and his friend that helped with the deck, so I wanted to make something that I hadn’t cooked for them before. I also wanted it to be a hearty meal that would satisfy two men who did physical labour for a living as well as our family of four. Given that we only had one guy over instead of two, I may have gone a bit overboard; I used a whole pan of veggies and meat, and the sauce that I made was supposed to serve ten. We ended up with lots of leftovers. Ah well, it reheats well. 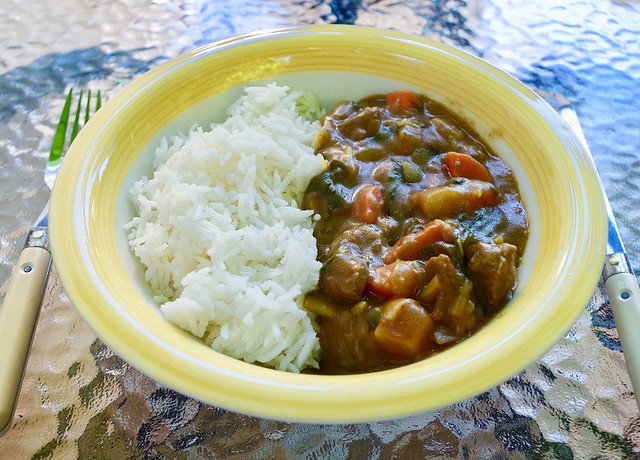 It’s always slightly disappointing to me how unappetizing this kind of dish can be once cooked, because it’s so chock full of delicious, healthy ingredients — and it’s really, really tasty. I used potatoes, carrots, baby bok choy, and steak, but it kind of turned out looking like brown glop. Aesthetics aside, everyone ate their share and some came back for seconds, so the flavor must have made up for the looks.