After my success with the Instant Pot Beef Bourguignon, I really wanted to use my new toy to make some Guinness® beef stew for my husband, since it’s one of his favourites. Unfortunately none of the Instant Pot cookbooks that I bought after Christmas (because of course that was one of the first things I bought) contained this recipe. I’ve had fantastic luck with the Chef John’s Beef and Guinness® Stew, which creates a delicious stove-top version of this dish. To try and keep the flavour the same as the version we love, I adapted the preparation method for the Instant Pot. Here’s what I did: 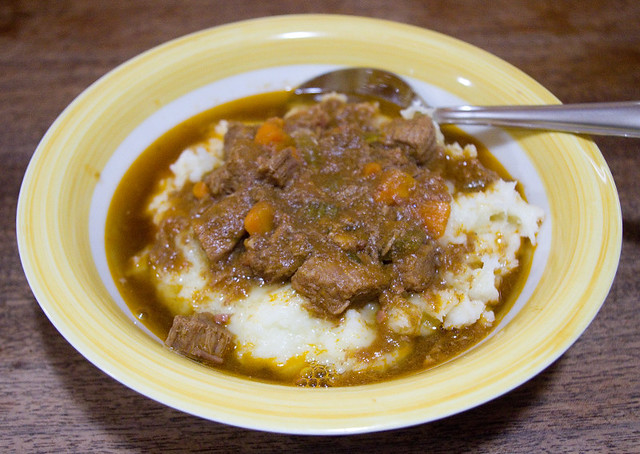 Cut* into small pieces:
– 4 slices low-sodium bacon
Peel and dice:
– 2 medium-sized yellow onions
Turn on the Instant Pot and select the Sauté program. If necessary, press the Sauté key repeatedly to toggle to the Normal setting. Wait until the LED displays “Hot”.
To the inner pot, add:
– 1 Tbsp olive oil
Stir the bacon and onions into the oil and cook for about 5 minutes, stirring often, until the bacon is cooked and the onions have begun to turn clear.
Add to the pot:
– 2 1/2 lbs (1.1Kg) boneless beef chuck**, cut into bite-sized pieces
Sprinkle the mixture with:
– 1 tsp salt
– 1/4 tsp black pepper
Press the Sauté key repeatedly to toggle to the More setting. Being careful not to burn the onions, cook until meat has browned, about 5 minutes. Stir often.
Press the Sauté key repeatedly to toggle to the Less setting.
To the pot, add:
– 1 can (440mL) Guinness® or other dark beer
– 1 cup low-sodium beef stock
– 5 cloves garlic, minced
– 1/4 cup tomato paste
– 4 sprigs fresh thyme OR 1/2 tsp dried thyme
– 3 carrots, cut into bite-sized pieces
– 3 stalks celery, cut into bite-sized pieces
– 1 tsp white sugar
Stir all ingredients together until evenly mixed.
Press Cancel on the cooker.
Place the lid and turn to lock. Turn the steam release handle to the Sealing position.
Select Pressure Cook, High Pressure, and set for 30 minutes. 10 seconds after settings are set, the cooker will beep three times and display “On” to indicate that it has started the preheat cycle.

While the Instant Pot program is running, you may wish to make:
– 4 cups mashed potatoes (OPTIONAL***) 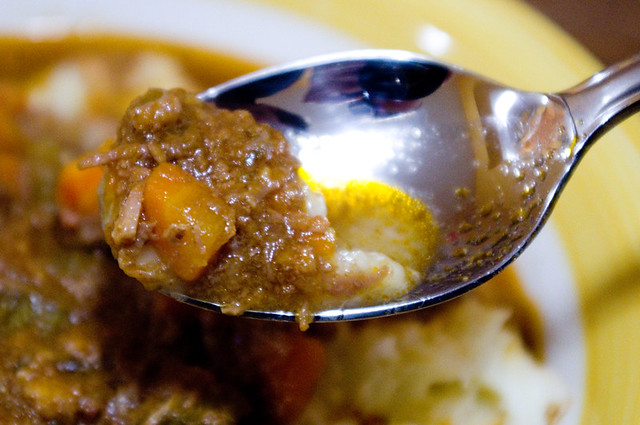 When the cooking cycle has finished, the cooker will beep and enter the Auto Keep Warm mode. (If the Auto Keep Warm function has been turned off, it can be turned back on at any time.) Once the cooking is complete, allow the pressure to release naturally for 10 minutes, and then turn the steam release handle to the Venting position to let the steam out for a Quick Release. Once the steam is safely released, remove the lid.
Turn the cooker back on to Sauté > Normal and simmer stew until it has thickened somewhat, about 15 minutes. While thickening, stir regularly, and remove the sprigs of thyme, if using fresh.

Serve stew in soup bowls, either as-is or atop a mound of mashed potatoes with a divot in the middle to hold the toppings.

*I find that bacon is easiest to cut up using kitchen shears.
**Most kinds of beef are good in stew, so use whatever is in your budget. The pressure cooking (or slow cooking, in traditional stews) will transform even the toughest cuts into something you can cut with a fork. Whatever the cut, make sure to cut off the worst of the fat, since the texture can become off-putting.
***I prefer this stew served over mashed potatoes to soak up all of the lovely broth, but many people like it plain.