I’m super excited about the Easter edition of 613flea coming up this Saturday because I’ve managed to source some absolutely fabulous “new” vintage Pyrex! It’s all beautiful, and some of it has become quite rare. 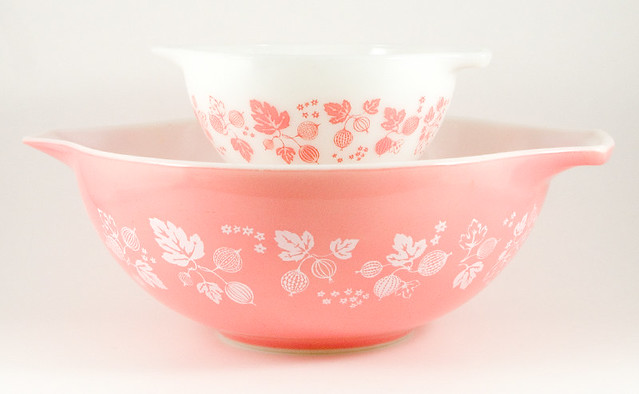 Pink Pyrex is highly prized because there weren’t all that many patterns released in this popular colour. 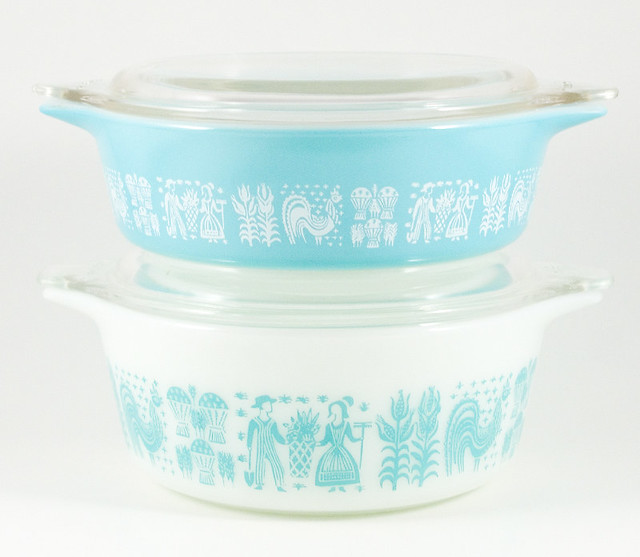 Butterprint is an extremely popular design, so much so that when Pyrex released their modern “Vintage Charm” line, one of the most common is quite obviously an updated version of this pattern. 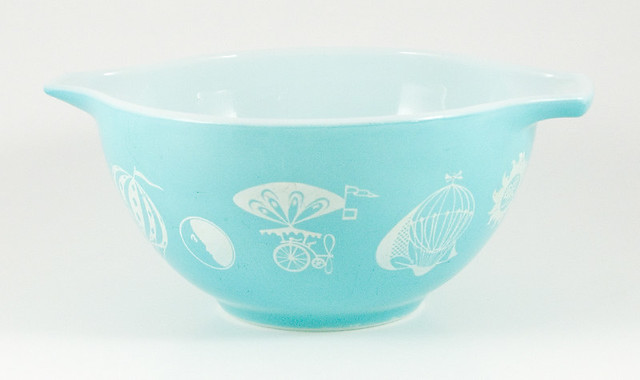 The Balloons pattern is extremely rare; it was only released for the one year, so there weren’t many of them made. This has made it a highly sought-after collector’s item. 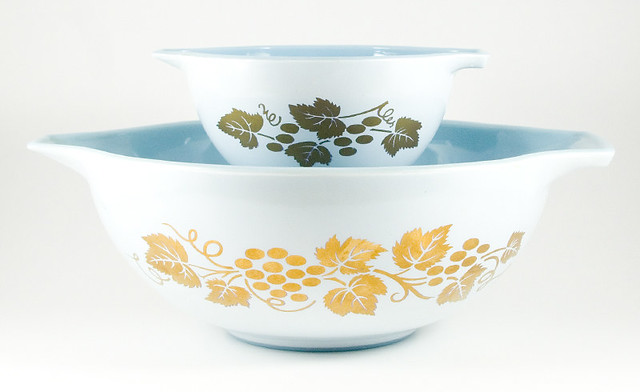 Golden Grapes is unusual because the design was printed on delphite blue rather than the more common opal ware. The gold colour actually comes from real gold, which means that these dishes, like any containing metal, are not microwave safe. (All of the other vintage Pyrex dishes without metal are microwave, oven, fridge, and freezer safe.) 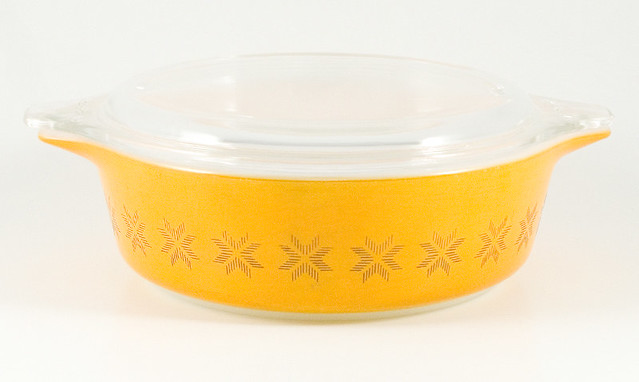 The Town and Country kitchenware was available as a large mix-and-match series, which is why so many of them survive to this day. They’re not as rare as some of their older counterparts, but they remain colourful and versatile. 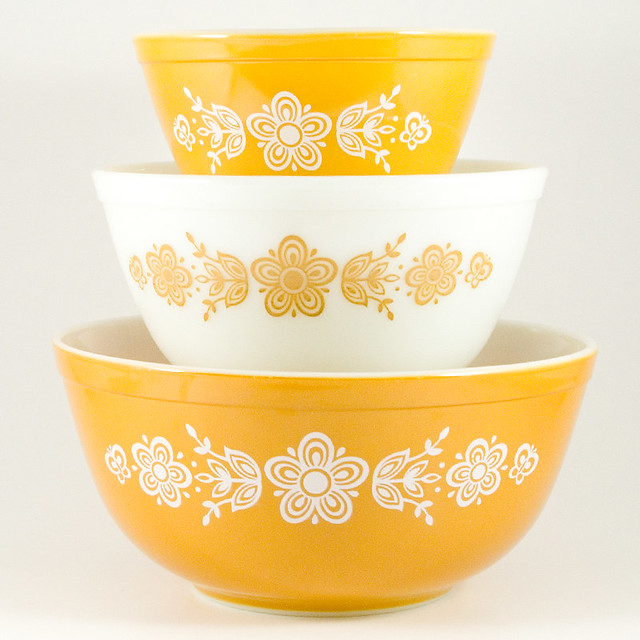 With Butterfly Gold we start getting into colours and patterns that I remember from my childhood; many people who had children around my age would have received kitchenware in this pattern as a wedding gift. 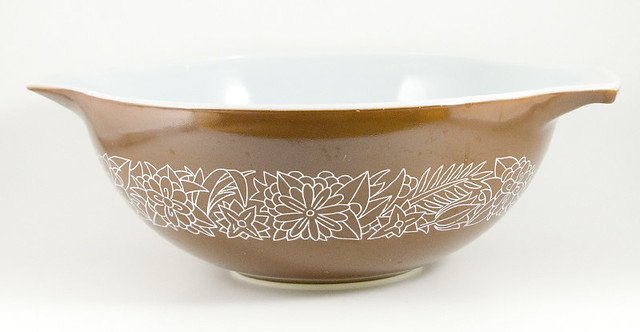 The Woodland pattern is less common than the Butterfly Gold, although they’re from the same era. 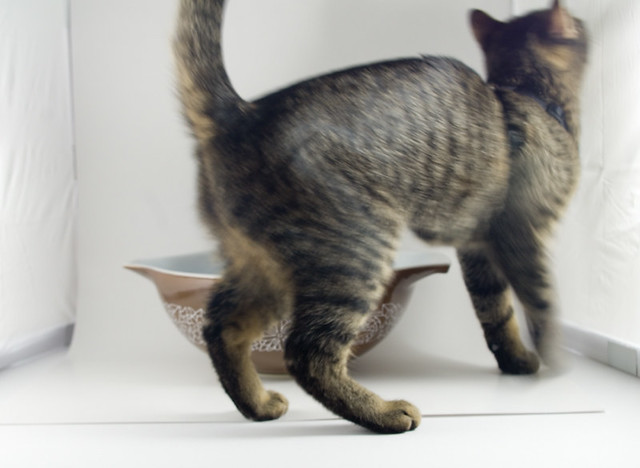 As an aside, this was a battle I was constantly fighting while trying to get these photos: my cat really likes my light box. I’m not sure why I was surprised, as it was both warm from the lights and, well, it’s a box. I use a long exposure because the lights aren’t all that powerful, which is usually fine since the dishes don’t move, but it does mean that the cat interrupts with a blur. 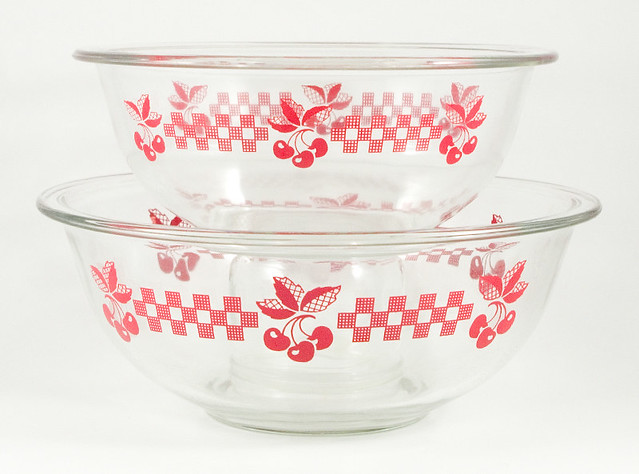 Last but not least, I have these lovely Checks & Cherries bowls, which are probably the most recent items in my collection. I love the vibrant colours! This pattern is also very rare, although more so in the US than in Canada.

I’ve wrapped all of this Pyrex carefully and loaded it into boxes, ready to bring to the flea market on Saturday. I can’t wait! My favourite part of markets is when someone finds that one piece they’ve been looking for for what seems like forever. It’s so satisfying to see peoples’ faces light up with enthusiasm. It really makes my day! 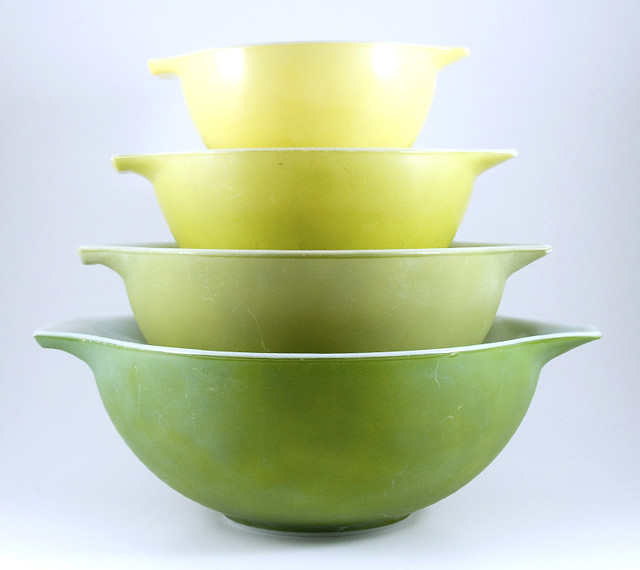 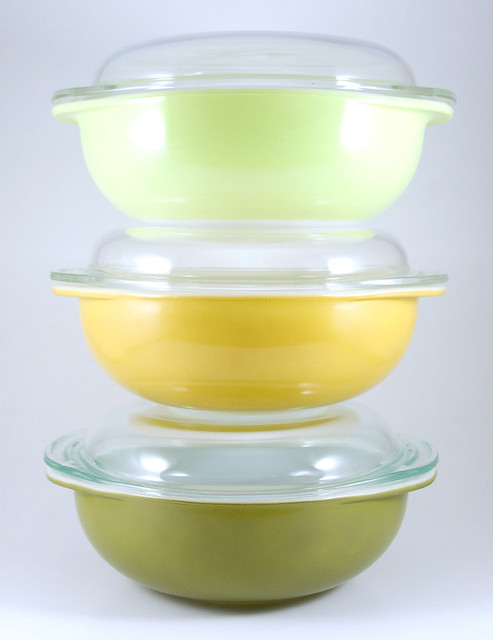 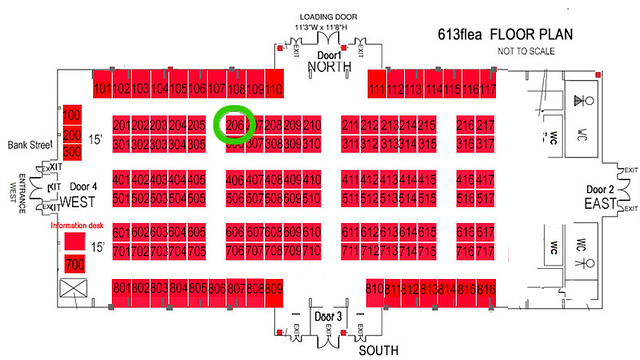 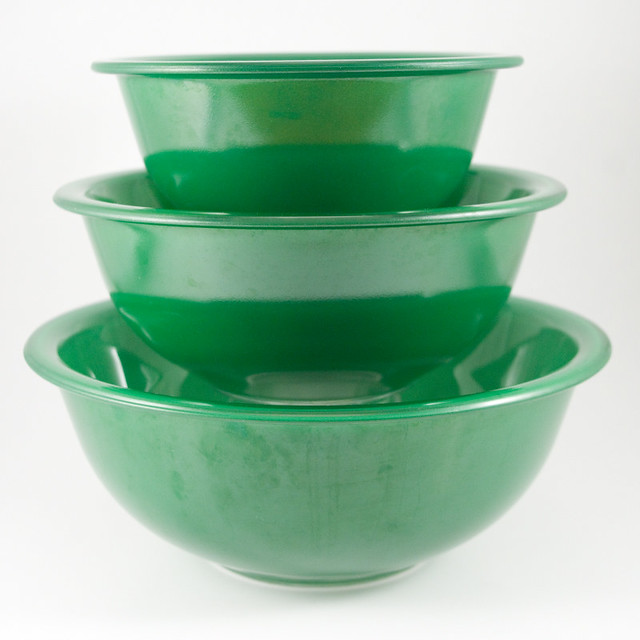 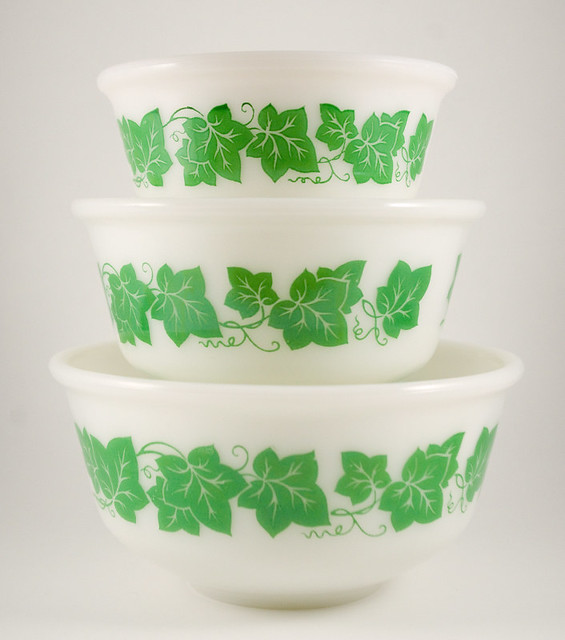 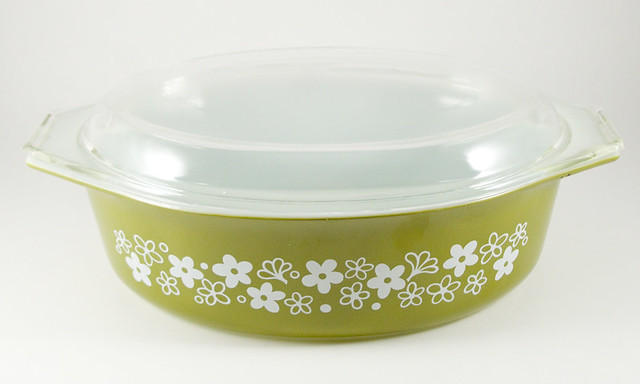 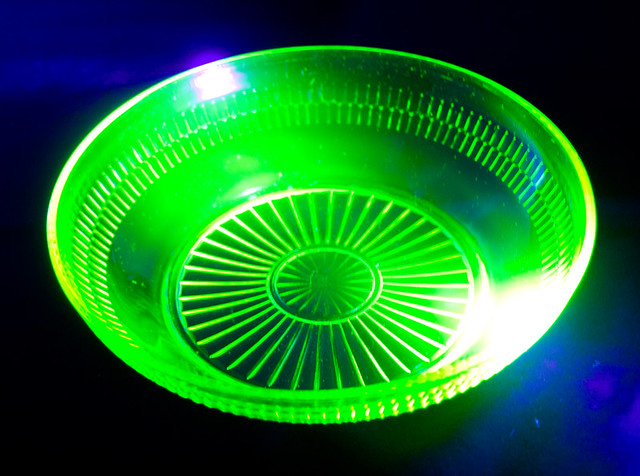 I just received the email confirming that I’ve been accepted to the 613flea on March 9th — only three Saturdays away. Sadly, this means I’ll be missing the market this coming Saturday, February 23rd, as I have schedule conflicts that day. Even so, I’m really exited, and I have so many “new” items that I can’t wait to show! 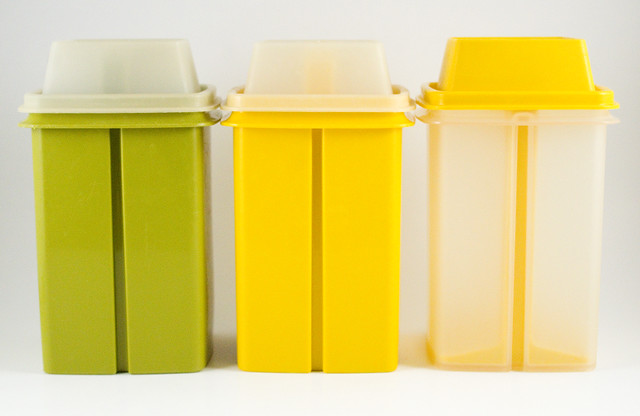 A perennial favourite is the Tuperware Pick-A-Deli; it’s so popular that they still make them new (although the colours have changed over the years). I believe that they started making this design as early as the late 1960’s, although I’ve had a hard time finding a firm date on that one. It’s really great for storing pickles in vinegar, fruit in juice or syrup, pickled eggs in brine, carrot or celery sticks in water — just about any solid food that you’d generally store in a liquid, really. The trick is the strainer with the handle, which lets you lift the solids out of the liquids easily without making a mess. 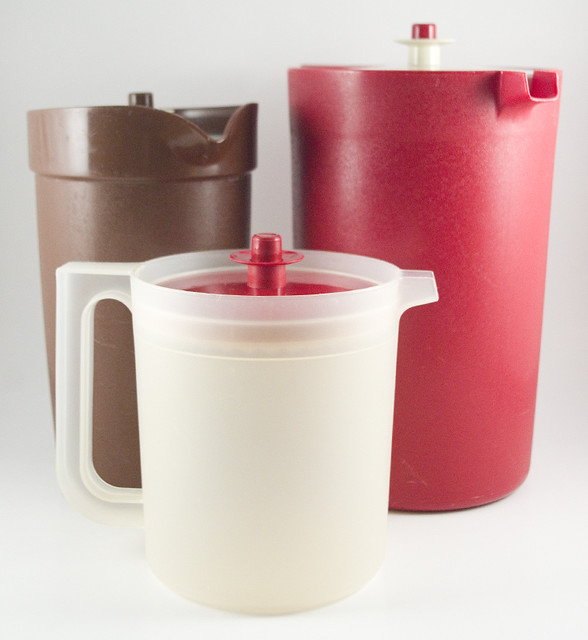 Tupperware pitchers (or, as we called them in our household, juice jugs) are also very popular, and they’ve come in many shapes and sizes over the years. Variations on this look are still available new as well! For people of my generation, there’s something about the older styles that conjures childhood memories of Kool-Aid or frozen juices from concentrate, served in matching tumblers in the summertime. 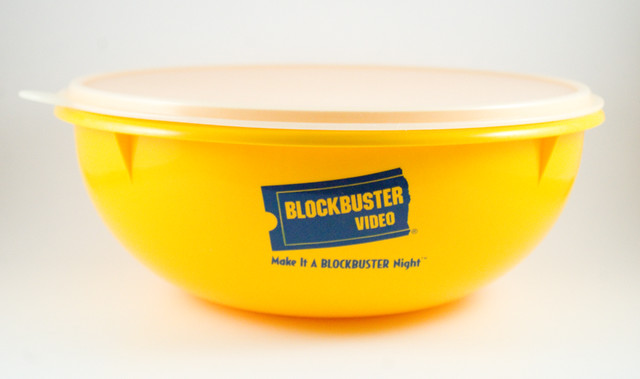 This last one, now, made me laugh when I found it. I never knew that Tupperware paired up with Blockbuster to make popcorn bowls. I’d guess that this happened sometime in the 90’s, when now-defunct Blockbuster was at its most popular. Apparently this kind of promotion ran more than once, since now that I’ve known what to Google, I discovered that they also came with a “Blockbuster Music” logo. It’s essentially a 26-cup Fix-N-Mix bowl with different branding, which was originally intended to throw your salad fixings inside, add some dressing, and then close the lid to mix it all together. It could still be used for the same, but I have a feeling that the Blockbuster version was marketed to put popcorn in, add butter, salt, and/or other seasonings, and then close and shake to mix. How else were you supposed to use a large plastic mixing bowl to “make it a Blockbuster night”? 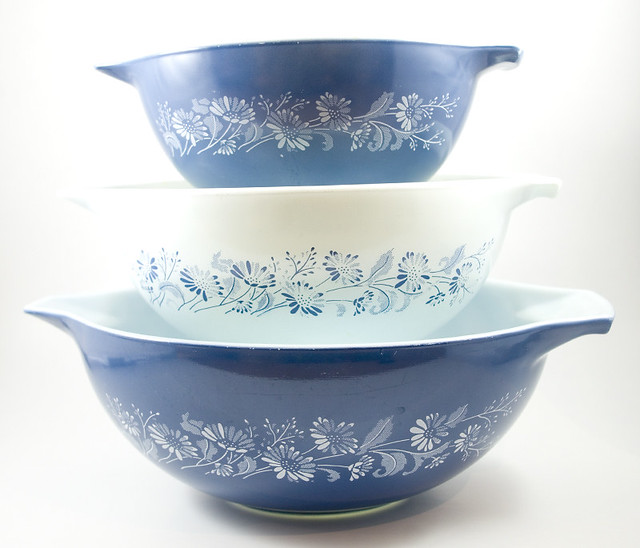 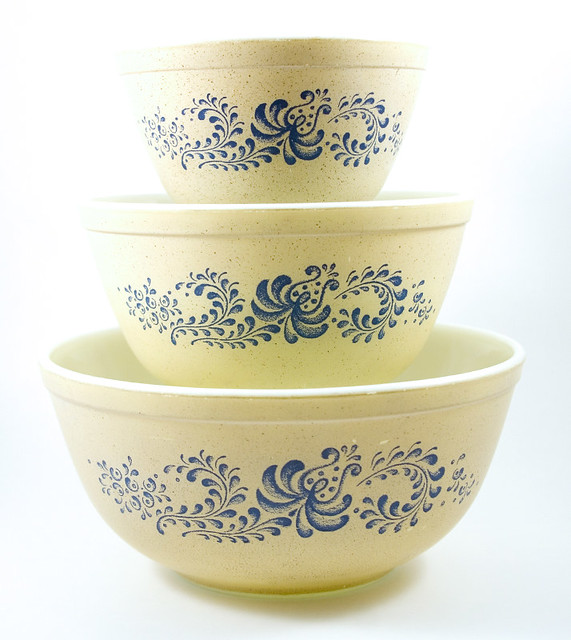 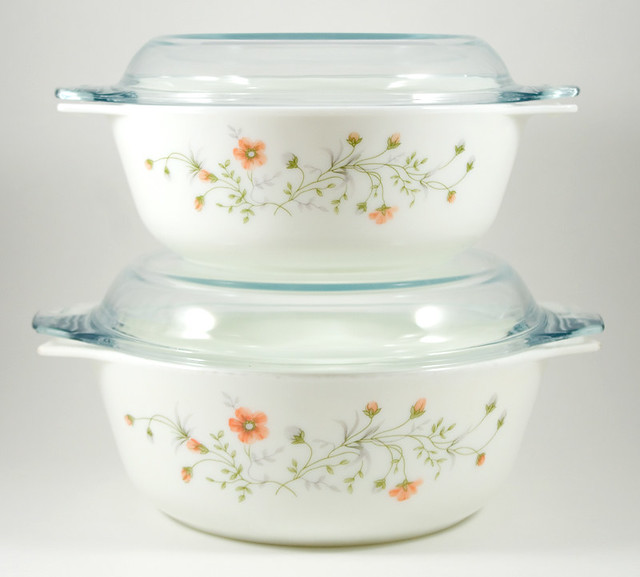 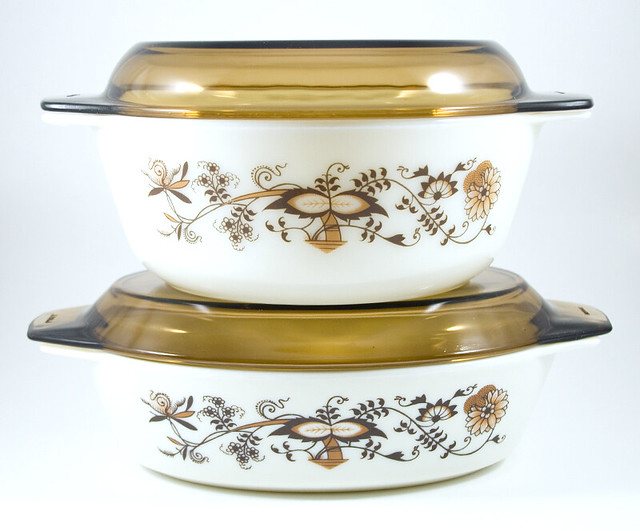